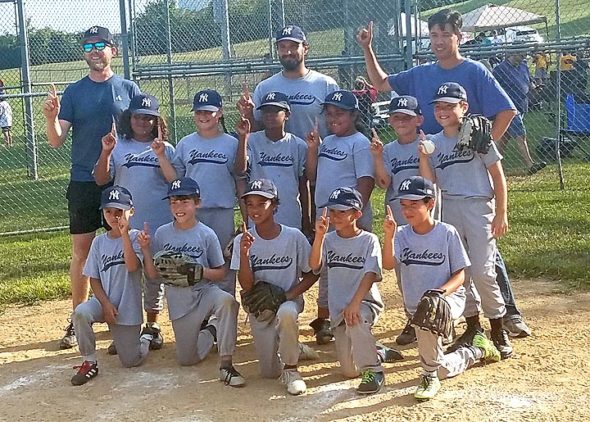 The Nipper’s Corner Yankees made a clean sweep of the 2019 Minor League championships with a 19–8 win over the Sam and Eddie’s Open Books Brewers in the post-season championship game on Saturday, July 27. It was the ninth straight win for the Yankees, after starting the season with losses in four of their first five games.

Henry Lake led the team by driving in five RBIs on two base hits and a triple. The Yankees jumped out to a four-run lead in the first off an RBI triple by Neirin Barker, who then scored on Lake’s first RBI single, followed by a Noelle Fisher hit to score Lake and an RBI single by Nico Sajabi. The Brewers roared back with seven second inning runs driven in by hits from Rocket Cowperthwaite, Jaida Jones, Theo Collins and Henry Babb. The Yankees took the lead for good by responding with seven more runs of their own in their half of the second, including a grand slam home run off the bat of Aiden Gustafson to also score Barker, Lake and Sameer Sajabi. Mark Meyer and Lake drove in the other three runs in the big inning. The Yankees’ tough defense held the Brewers to only one more run in the final inning, while continuing to hit the ball well, with another six runs in the third with RBIs by Kyu Flateau, Zander Breza, Lake, Nico Sajabi and Meyer. The Yankees racked up 23 hits on the day, with Nico Sajabi, Fisher and Meyer joining Lake with three hits each. The Brewers had 15 total hits for the day, led by three each from Collins and Naima Jones, while Babb, Collins and Cowperthwaite all contributed two RBIs. 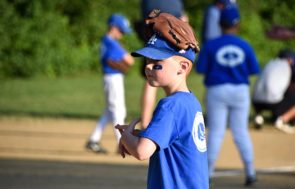 Luke Mikesell of the Peach’s Dodgers found a creative spot for his mitt while stretching between innings in the semi-final game last Wednesday, July 24. The Dodgers lost in a close one, 9–8. (Photo by Luciana Lief)

The Sam and Eddie’s Open Books Brewers advanced to the championship game with a 15–12 win over the Tom’s Market Pirates in the tournament’s first semi-final game on Tuesday, July 23. The Brewers took an early first inning lead and never gave it up, scoring on RBI singles by Henry Babb, Lili Herzog, Luc Amend, and Rocket Cowperthwaite and with an Aaron White double for a total of six runs. The Brewers bats were hot, scoring runs in all five innings off 21 total hits, led by four hits and multiple RBIs from Joey Amend and siblings Lili and Logan Herzog. Theo Collins, Naima Jones, Babb and Cowperthwaite also contributed multiple hits. While falling just short, the Pirates mounted a final inning, two-out rally with three runs off RBI singles from Orion Sage-Frabotta, Tavey Johnson and Tyler Blair. Despite the loss, the Pirates fought hard and combined for 21 hits on the day, led by three each from Sage-Frabotta, Nakye Miley, Blair and Johnson, who added a two-run homer in the first. My’Son McCain, Nylaiyah Miley, Tanner Miller and David Torres also added multiple hits. 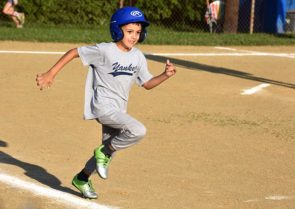 Marc Meyer of the Nipper’s Corner Yankees sprinted to first during the semi-finals on Wednesday, July 24. The Yankees snuck by the Dodgers to make it to the championship game. (Photo by Luciana Lieff)

The Nipper’s Corner Yankees almost didn’t make it to the championship game, just squeaking out a 9–8 win over the Peach’s Dodgers in the tournament’s second semi-final game on Wednesday, July 24. Tied at eight with the Yankees batting on the bottom of the last inning, Zander Breza led off with a hard hit, line drive triple, and then scored the winning run on Neirin Barker’s walk-off RBI single. The Yankees got their offense running in the first, scoring five runs, two on a Sameer Sajabi triple, two more on an Aiden Gustafson home run and another on Nico Sajabi’s ground ball triple. But the Dodgers fought right back, putting up five runs in the second and three more in the third. Dodgers contributing RBIs in the rally included Henry Carr, Alex Main, Javin Obringer, Avanell Mikesell, Ezra Lydy, Ben Morris and Malini Miller, whose RBI single in the top of the third knotted the game up at 8. Miller and Morris led the way with two hits and two RBIs each. Neirin Barker led the Yankees with three hits and a pair of RBIs, with Sameer Sajabi and Gustafson both adding two RBIs as well.

The Nipper’s Corner Yankees won the regular season with an 8–4 record, followed by the Tom’s Market Pirates and Sam and Eddie’s Open Books Brewers, both at 7–5 and the Peach’s Dodgers at 2–10. 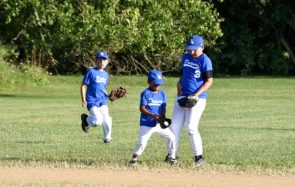 Player awards handed out at the end of season picnic on Saturday included Minor League coach’s awards to Noelle Fisher and Zander Breza of the Nipper’s Corner Yankees, Lili Herzog and Naima Jones of the Sam and Eddie’s Open Books Brewers, Edwin Harrah and Tanner Miller of the Tom’s Market Pirates and Luke Mikesell and Ashby Lyons of the Peach’s Dodgers. The Minor League batting championship was awarded to Henry Lake of the Nipper’s Corner Yankees, with a .825 season average. Major League coach’s awards were presented to Oskar Dennis and Colin Linderman of the Sunrise Café Orioles, J.P. Anderson, Violet Babb and Brady Baker of the Adoption Link Dodgers and Josh Clark and Brendyn Slone of the Ye Olde Trail Tavern Cardinals. Linderman was also named the Major League batting champion, with a season average of .667.

Thanks to all players, parents, family members, volunteer coaches and umpires, sponsors, the Yellow Springs News and Tanner Bussey, John Burns and the rest of the Village of Yellow Springs parks maintenance crew for all the time and effort everyone put into another successful season. See you next summer!