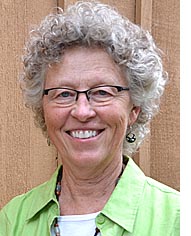 Pam Conine is running unopposed for re-election to the office of Mayor of Yellow Springs. (Photo by Megan Bachman)

Frequently donning a hat that says “Whereas” and a decorative sash, Mayor Pam Conine spent much of the last two years out and about in the community, marrying couples, cutting ribbons, delivering proclamations and teaching school kids about civics. It was part of her goal to be a “visible and accessible mayor,” and a role she enjoyed.

Now, as Conine — who often goes by “Mayor Pam” — runs unopposed for a second term, she looks to continue to represent, and celebrate, the community.

“What I enjoy most is celebrating Yellow Springs and representing the Village,” Conine said in a recent interview. “I try to go to as many public events as I can and join in the celebrations.”

Presiding over the local court has been Conine’s other main role.

Conine said her approach to Mayor’s Court has incorporated elements of “restorative justice.” In one example, she required someone cited for littering in Glen Helen to join a group of volunteers who weekly pick up trash in the nature preserve. In another case, Conine reduced the fine for a young person found with stolen property after they wrote a letter to the victim.

In addition, Conine said she takes an individual’s financial circumstances into account when setting fines and payment plans. Listening, she added, is an important aspect of this court, although she said she must keep it a formal courtroom and not a place to “pass the stick.”

“My approach is giving the person a chance to speak, to tell their side of the story,” Conine said.

Learning the ins and outs of the local justice system has taken time, Conine reflected. That’s one reason she supports the amendment to the Village Charter changing the mayor’s term from two to four years. That charter change will be on November’s ballot, along with two others expanding the voting franchise.

“I think two years is a very short time,” Conine said. “Most mayors of towns our size have four-year terms.”

Conine added that she did not initiate the charter change, which would not take effect until after the next election for mayor  in 2021.

Looking ahead, Conine said she wants to learn more to improve as the town’s mayor.

“I want to delve deep, to educate myself on issues of the court and continue to be of service to the villagers,” she said.

Conine also wants to continue “Mayor Mondays at Mills Lawn,” where she reads to kindergarteners and teaches them about local government.

“It’s important to me,” Conine said of that work. “We had the discussion about, ‘Does the mayor have to be a man?’ and ‘What does a mayor do?’”

In her next term, Conine also wants to focus on “building on the changes in Mayor’s Court.” Last year, Village Council passed a law requiring local police to cite all misdemeanors to Mayor’s Court, with a few exceptions.

“We’re seeing all the cases we are allowed to see,” Conine said.

While Council has continued to explore whether to hire a local prosecutor so that more cases could come before the local court, Conine is opposed to the idea.

“I feel it would be a waste of Village funds,” Conine said of implementing that policy.

The vast majority of cases the mayor adjudicates — 92 percent, according to Conine — are related to traffic offenses. Meanwhile, Greene County offers additional resources for those facing more serious offenses, such as operating a motor vehicle while intoxicated, she said.

“Offenders can’t get the help they need here,” Conine said.

At the same time, Conine believes strongly in the role of mayor’s courts, she said. When she saw an Ohio ACLU cartoon critical of Ohio’s mayor’s courts, of which there are 300 in the state, she reached out to the group to tell them about the Yellow Springs court.

“They were surprised by the example of our local court,” Conine said of her meeting with ACLU representatives.

Conine added that while she is legally allowed to sit at Council table as a non-voting member, she will continue to refrain from participating in that way as “traditionally, that’s not been done,” referring to voting.

“I prefer to watch Council meetings at home in my jammies with popcorn,” she joked.

A retired teacher of 42 years, Conine moved to Yellow Springs as a Morgan (now McKinney) Middle School teacher, spending most of her career in special education. After she retired from McKinney in 2009, Conine taught at Antioch University Midwest.

Conine was elected mayor in 2017 with 63 percent of the vote, succeeding Mayor Dave Foubert, who retired after 26 years in the office.

As she is running unopposed, the 68-year-old villager looks forward to continuing to serve and represent the community for the next two years.

“I love being the mayor of Yellow Springs,” Conine said. “I have the time. I have the energy. I love the village.”