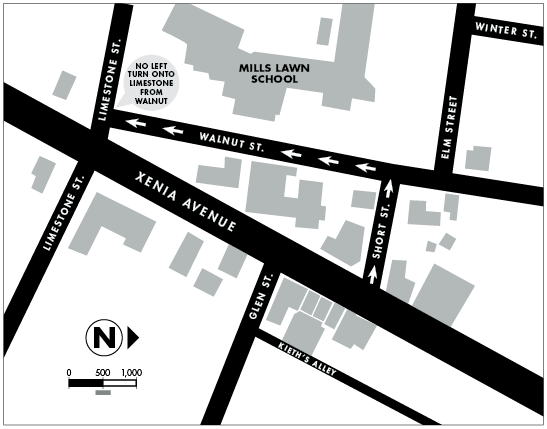 Starting in October, the Village will test out a new traffic pattern downtown. Short Street and a section of Walnut Street will be turned into one-way streets for three weeks, to address traffic congestion and pedestrian safety concerns in the area. In addition, no left turns will be allowed from Walnut Street onto Limestone Street.

The Village of Yellow Springs is rolling out a temporary transportation project next month.

Short Street and a section of South Walnut Street will be turned into one-way streets for a period of three weeks in October and November to test out a new traffic flow in the area.

The goal is to ease traffic congestion and improve pedestrian safety, especially during school pick-up and drop-off at Mills Lawn Elementary School, according to Village Manager Josue Salmeron at last week’s Council meeting.

“It will reduce the congestion and safety hazards with kids being picked up and dropped off,” Salmeron said.

In addition, only right turns will be allowed from South Walnut Street onto Limestone Street. And parking on both streets will be changed to angled parking available on only one side of the street.

While more parking spaces are anticipated on Walnut Street, there will be fewer on Short Street, according to Village staff this week.

If Council approves the plan, the temporary changes will be in place from about mid-October to mid-November. After that, Council will solicit public feedback to decide whether to make the changes permanent.

Addressing the issue of safety, YS Police Chief Brian Carlson told the News on Monday that two students have been struck by vehicles on South Walnut Street, near the school, in the last four years.

“It was nothing serious, but it’s always very frightening,” Carlson said.

Both accidents occurred away from the crosswalk, when students were crossing the street from a northbound vehicle, Carlson added.

Carlson said he is open to trying the new approaches, but reminded villagers that they may not last.

According to an accident analysis in the Active Transportation Plan completed last year, there were 240 accidents of all types in the village from 2014 to 2018. Of those, 17 involved pedestrians and bicyclists. The majority of those, 13, were along Xenia Avenue and Dayton Streets, which the report noted were areas of higher vehicle congestion.

Changes to local streets and traffic patterns were recently highlighted in the Active Transportation Plan, which Council approved in August 2018, and portions of which Salmeron said this week he has been tasked with implementing.

Making South Walnut Street one way with angled parking was one of several ideas for the area proposed in the plan. That strategy was given a high priority and recommended to be implemented in one to two years. Others in the area included sidewalks for Phillips and Limestone streets, a new “shared-use path” along South Walnut Street, a raised crosswalk across South Walnut Street and an expanded school zone with reduced speed limits.

Closing off Short Street to traffic, except for delivery vehicles, was also mentioned in the Active Transportation Plan, but as a lower priority, long-term project, to be implemented in six to 10 years. Although it is not part of the upcoming trial, the idea has been a recurring suggestion in town for years. The recommendation from the plan reads:

“Open Short Street to people by prohibiting cars other than delivery vehicles. Program the space with tables and chairs and consider other placemaking features. Bicycle parking, especially dimensioned for bicycles with trailers or cargo bikes, should be provided. This space also provides a connection for pedestrians and bicyclists from the path along Elm Street to the commercial core. Closing this street to cars would also improve the safety of arrival and dismissal at Mills Lawn School by changing local circulation patterns.”

Village leaders are still considering whether to make the angled parking along South Walnut Street back-in or front-in parking.

According to the Active Transportation Plan, “back-in parking is preferable to head-in parking because it improves driver sight lines, directs vehicle occupants away from the street when they open their doors, and makes loading/unloading safer.”

Finally, the plan recommended several changes for the intersection of Walnut Street and Limestone Street as a lower-priority, long-term project:

“Curb extensions should be used at the northwest and northeast corners to tighten this intersection, to reduce crossing distance for pedestrians and slow turning vehicles. The yield condition for southbound road users on Walnut Street should also be converted to a stop condition, which should increase pedestrian confidence when crossing at this location.”

The Village met this week with local school leaders and a few downtown business owners to hear feedback on the proposed temporary projects. Council will discuss the issue at its Sept. 16 meeting. If approved, temporary striping, barriers and signs will be erected soon after the Oct. 12 Street Fair.