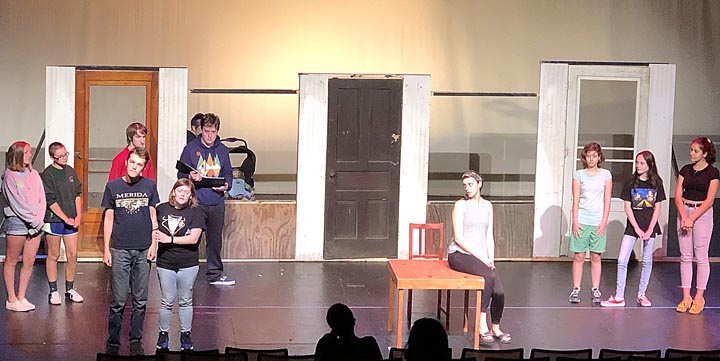 Yellow Springs High School and McKinney Middle School students rehearsed for “The Bigfoot Letters” at the Foundry Theater earlier this week. The play tells the story of a Southern Ohio woman’s run-in with Sasquatch that results in her attempting to raise a baby Bigfoot on her own. The show runs Thursday–Sunday, Sept. 26–29. The performers include, from left: Kira Hendrickson Rosemary Burmester, Jonas Bahn, Zoe,Clark, Lucas Sansom, Solomon Shemano, Julia Hoff, Zoe Clark, Olive Cooper and Stella Leiff. (Submittted photo by Lorrie Sparrow-Knapp)

A rural Southern Ohio woman named Sheila calls a hotline for advice: she was driving her pickup truck through the woods, and her life changed in an instant when she not only encountered the mysterious Bigfoot, but accidentally hit it with her truck, orphaning an infant Sasquatch in the process. Sheila did what anyone would do in such a situation — she took the little Bigfoot home to raise it as her own. Now what?

Thus begins “The Bigfoot Letters,” a comedy presented by McKinney Middle School and Yellow Springs High School for four performances, Thursday–Saturday, Sept. 26–28, at 8 p.m., and Sunday, Sept. 29, at 2 p.m. All performances will be held at the Foundry Theater at Antioch College.

“The Bigfoot Letters” was written by Russell Stich of Lakewood, Ohio’s Something Dada improvisational troupe and poet and author Nancy Nixon. Something Dada teamed up with Blank Canvas Theatre in Cleveland to debut the show in 2016. This weekend’s Yellow Springs debut of “The Bigfoot Letters” will carry the distinction of being the second production of the play since 2016, and the very first high school production.

YSHS and MMS Performing Arts Teacher Lorrie Sparrow-Knapp directs the local performances, and said via email this week that the show was brought to her attention by a student.

“It was so interesting and off-the-wall — we just couldn’t say no!” she said.

Tensions rise in “The Bigfoot Letters” when Sheila and her newly adopted Missing Link are pursued by an amateur Bigfoot hunter, a local pastor and the sheriff. The local community is sent into panic, questioning the viability of Sheila’s plan to welcome this foundling creature into her life.

“[‘The Bigfoot Letters’] has a really great story to it about family — how we choose our family, who we accept as family and how we interact with family,” Sparrow-Knapp said. “Plus, there’s a Bigfoot and we get to speak Klingon. I mean, you just can’t beat that.”

The young MMS and YSHS actors who bring “The Bigfoot Letters” to life spent much of their summer vacation working on the play. This represents a change from years past, when student actors would present one or two plays in mid-fall and a musical in spring. This year’s fall production comes earlier, and will be followed by a musical in December.