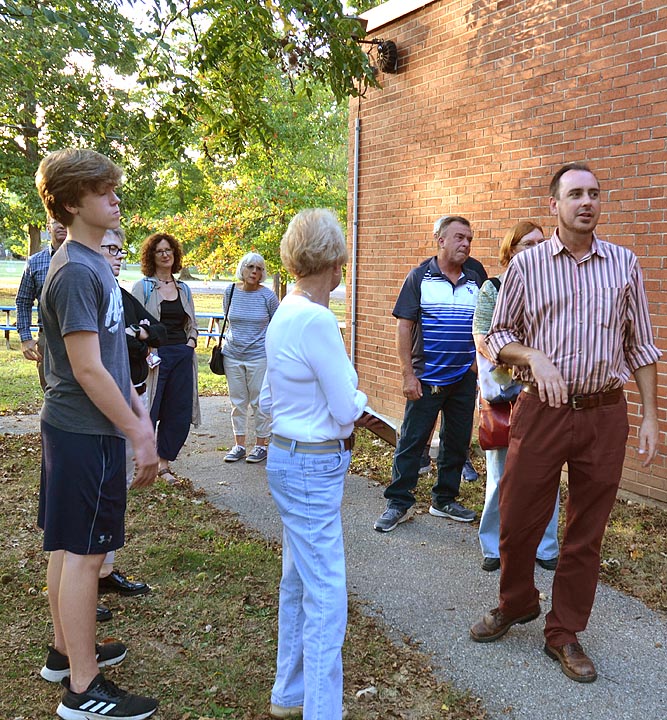 By Audrey Hackett and Carol Simmons

From the perspective of those who know the buildings best, what are the local school district’s most pressing facilities issues?

Answering that question was one purpose behind recent tours of Mills Lawn Elementary School and Yellow Springs High School/McKinney Middle School. The elementary school tour was held in September; the high school/middle school tour in August.

Led by Mills Lawn Principal Matt Housh and districtwide Head of Maintenance Craig Carter, who has worked for the district since 2008, the Mills Lawn tour drew two local residents as well as members of the facilities task force, including Superintendent Terri Holden.

In a walk-around that lasted almost two hours on the evening of Sept. 18, outdoor issues such as the lack of a fence around the property and indoor issues such as energy-inefficient windows, lack of central air conditioning in parts of the building, lack of a separate cafeteria and lack of learning spaces conducive to group work were among the issues highlighted by Housh and Carter.

Classroom space is “inefficient and not designed for modern learners, but we work with it,” Housh said during the tour.

On the plus side, Housh mentioned the campus’ greenspace.

“We have lots of greenspace. We love that,” he said.

The original Mills Lawn structure was built in 1953, with additions in 1958 and 2003. The school currently enrolls about 330 students in grades K–6, according to Housh.

Safety-related issues addressed on the tour included a lack of a vestibule at the front entrance, leading to a potentially unsafe point of access for those entering the building, a matter raised by Superintendent Holden. The district is currently exploring a swipe card system to replace the electronic buzzers at both schools. Holden emphasized that the district aims to retain its “openness” to the community, even as it improves security.

The lack of fencing or other enclosure around the property is an additional safety issue, according to Holden.

“In lieu of a fence, what do you do?” Holden asked.

Housh acknowledged that the openness of the campus was “unique,” and an asset to students and villagers.

Another safety issue is the lack of good emergency exits from classrooms, according to Housh. Although the school recently upgraded its safety plan by creating emergency exits through a window in each classroom, the exits don’t provide a quick escape route, especially for younger students and those in wheelchairs who would require help, he said.

Space-related issues highlighted on the tour included the design of classrooms, which are single large spaces not conducive to housing multiple learning areas, Housh said. The building is also short on both storage and classroom space, and currently uses a trailer for its band and orchestra classroom, as well as storage.

“Storage is a huge issue,” Housh said, referring to the elementary school as a whole.

Another pressing space issue is the double use of the gym as a cafeteria, creating scheduling difficulties for physical education. Some students currently eat lunch outside or in their classrooms, according to Housh.

In addition, the Mills Lawn kitchen currently has insufficient space for food preparation and dining, and would require equipment upgrades in order to offer more “progressive menus” that entail cooking rather than just heating food, according to Holden.

Another overall building issue is the lack of central air in older parts of the school, leading to the use of energy-inefficient window AC units. On the west side of the building, teachers additionally have to pull down shades to block out afternoon sun to prevent rooms from getting too warm. The age of the building precludes running air conditioning ducts through existing pipes, though other solutions do exist, according to architect Mike Ruetschle, who previously consulted with the district on new school designs and is a member of the facilities task force.

Energy inefficiency is also an issue with windows in the older part of the building, according to Carter. Replacing the existing single-pane windows would cost  “hundreds and hundreds of thousands of dollars,” he said in response to a question from a member of the task force. The school has not sought a quote on the project.

Facilities task force member Chad Runyon asked what maintenance projects had been tackled over the summer. Housh and Carter replied that the building had been thoroughly cleaned, flooring and carpets had been cleaned or replaced and portions of the surrounding blacktop had been repaired.

No facilities-improvement projects were mentioned outside of these items.

Asked by the News which issues discussed on the tour seemed most pressing, Housh cited the need to replace inefficient window AC units, lack of storage space, lack of suitable learning spaces and antiquated plumbing as the key issues.

However, he praised teachers and staff for their creativity in dealing with classroom and building limitations.

Ahead of the tours of school campuses, the facilities task force met with Carter, the head of maintenance, and Thomas Young, who is in charge of technology.

Carter and Young attended the group’s July 31 meeting to answer questions and share their perspectives. When asked what he wished he could do,” Carter highlighted replacing the modular units at both schools.

“The trailer out back here [at Mills Lawn] needs to be put on fire,” he said. “It wasn’t meant to be out there 25 years.”

And the so-called “shoebox” used by the middle school “was poorly constructed,” he said. “We have moisture issues,” he added.

“You can’t put drywall in schools and not expect people to knock holes in it,” Carter said.

He also noted that the district gets fined by the county each year for not having a fence around the playgrounds at Mills Lawn, but he’s not concerned about that.

Questions about a district maintenance plan revealed that there is no written plan.

Carter said that, each year, he and past Superintendent Basora walked through the schools and identified short-term and long-term needs. In addition, he has a collection of equipment and building warranties that he monitors closely, he said.

“It looks like maintenance has been reactionary instead of planned,” task force member Chris Hamilton observed.

Superintendent Holden said she wants to develop a five-year plan.

“If we just keep running like this and fixing things as they come up, we will be losing money,” she said.

Task force members seemed in agreement that more district money needed to go toward building maintenance, though the source of the funding was unknown.

In terms of technology, Young said that the older buildings have multiple issues in providing modern technology.

“So much has been patched in over the years,” Young said, adding that “power has been a continuous issue,” particularly at the high school.

He noted that every time the power goes out, “it ages [the computer system] a little more.

The system is managed and updated by MVECA., with which the district has a three-year contract.

Task force members followed up their conversations with Carter and Young with a tour of the middle/high school campus on Aug. 28.

The main areas of attention included:

• Safety and security: task members feel a new entrance with a vestibule would provide more security, and a change in drop-off practices would increase student safety. The task force has also noted that climate change and the increase in extreme weather necessitates new thinking about the school environment, not only terms of safety, but also physical comfort.

• The building envelope — outside walls, doors, windows and roof: the envelope is not effective in keeping inside air in, and outside air, water, insects and animals out, the task force observed. The roof and some windows leak, Carter said.

• ADA compliance: the band room is not accessible without going outside and around to an outside door, and then a wheelchair user would be restricted to the top row of seats. “We’re lucky none of our wheelchair-users are taking music classes,” he said.

• The modular unit, or “shoebox”: faculty and students report poor air quality and poor noise control. Carter said he has to clean mold off the walls every summer. The multi-handicapped room is not adequate for the current student population with wheelchairs, Hatert said.

• The electrical system: students report that circuits blow when they use the microwaves in the cafeteria. Carter said he is constantly changing breakers. Teachers report that classrooms have an insufficient number of outlets.

Asked about what he feels are the biggest educational needs, Hatert listed: flexible classroom space that can be configured in different ways, collaborative space for team work that can be supervised by teachers, more spaces like the courtyard for safe outdoor learning and better classroom furniture that accommodates contemporary teaching methods.