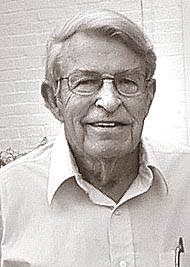 Cecil was born Sept. 8, 1923, in Pomona, Mo., to Cecil and Myrtle (Crapo) Holland. Growing up during the Great Depression, a lot was required of him. He picked cotton and helped his father operate a small store, gun and watch repair and newspaper printing business. By the time he was 15 years old, he had lost a baby brother, his mother, his older sister and his father. He and his siblings went to live with relatives. Wanting to be on his own, at age 17 he joined the Civilian Conservation Corps and worked in forestry in the Missouri Ozarks. There he developed an appreciation for trees that he would pass on to his children. In World War II, he served in England as a radio operator and mechanic. While stationed, several men in his unit told him of Antioch College, which intrigued him. After the war, despite only one year of formal education, he earned his GED, took a few courses at Roosevelt University in Chicago and eventually achieved his goal of admission to Antioch.

Through Cecil’s co-op experiences, he found that he loved working with children, and in 1956, he graduated from Antioch with a bachelor’s degree in secondary school social studies. At Antioch he met and married Frances, and the two built a house and started a family in Yellow Springs. In 1970 he earned a master’s degree in sociology from the University of Idaho. In Yellow Springs, Cecil was active in Community Service and helped found the Unitarian Fellowship. For almost 25 years, he taught history, sociology and government at Greenon High School. Gardening was a lifelong passion, and he wielded his wheel-hoe with power and precision. The dirt flew when he cut a row, with his kids running along behind dropping beans or corn in the furrow. He loved his dogs and everybody’s dog adored him. He was Dog’s Best Friend.

Cecil hoped, he dreamed and he created. He was curious, silly and playful. His mind and body were in constant motion. In 1971, he bought a farm in Blue Creek, Ohio; his dream and his happy place. It was everything he wanted: Away from the cities, up a two-mile winding gravel road, opening out on top with spectacular views for miles across the forested ridges. Working alongside his friends and neighbors, he learned to bush hog the fields, clear brush with a chainsaw, dig postholes and string and stretch barbed wire, and he raised a small herd of cattle. He fixed cars and farm machinery and used his carpentry skills for numerous projects. He built a beautiful house on the hilltop and added ponds for water and wildlife. He listened to the whippoorwill, roamed the hillsides with his children and his dogs, identified the trees by their bark (not the leaves!) and hunted for morel mushrooms, berries, persimmons, pawpaws or whatever nature had to offer. Every year he tended a magnificent garden and grew tomatoes sweeter than any found in the gourmet markets!

In 1982, he retired to his farm, and one Saturday, while attending a farm auction, he found himself bidding against a woman with a terrific sense of humor. He let her win that day and later ended up marrying her, his second wife, Patsy. With the help of family and many kind and giving neighbors, he lived on his farm for over 30 years, pitching hay bales and stacking firewood until he was 89.
Throughout his life, Cecil demonstrated a genuine interest in other people, and in the evenings he liked to drop in on friends. He learned from others and he shared what he knew with others. His passion for reading, language and wordplay earned him the nickname of “The Walking Dictionary.” Finding a dead carpenter bee on a windowsill, he declared it a “would-be wood bee” and thereafter, upon seeing one, relentlessly queried his children: “Is that a wood bee? Or a would-be wood bee?”

He was extremely well-read in politics and current events, and a proud Democrat. He lectured family members on social stratification and the concentration of wealth. He engaged in spirited debate with fellow teachers, his dear brother, other family and friends. He made repeated small contributions to countless progressive organizations, and was rewarded with buckets of mail solicitations. When dementia dulled his once sharp mind, he still prized this “correspondence,” as he referred to it, overflowing his desk.

Cecil showed us how to live with dementia — with dignity and with humor. Ever the optimist, he ended each visit in the nursing home with a new and clever saying, such as, “Our job is to keep up with each other — and to keep each other up!” While his family had never heard him sing a note, he found a new talent at Oak Creek. At the dinner table he entertained staff with his made-up songs. Once he rose up out of his wheelchair and the nurse, thinking on her feet, decided she’d get his attention through song, “Cecil, sit dow—wwn.” With a sly smile Cecil sang back to her, “For what rea—son?”

Cecil was preceded in death by his parents; his sister, Ruth; and his second wife, Patsy. He is survived by his brother, Quinten Holland, of California; his first wife and dear friend, Frances Harville Holland, of Beavercreek; his children, Carolyn (Michael Carbary) Holland, of Ann Arbor, Mich., Mary (Cinci Stowell) Holland, of Dayton, Robert (Margaret) Holland, of Bellbrook, and Ruthie McIntosh, of Georgetown, Ohio; grandchildren, Makenna McIntosh and Marcos Carbary; and a community of friendship, related by blood and/or common interests.