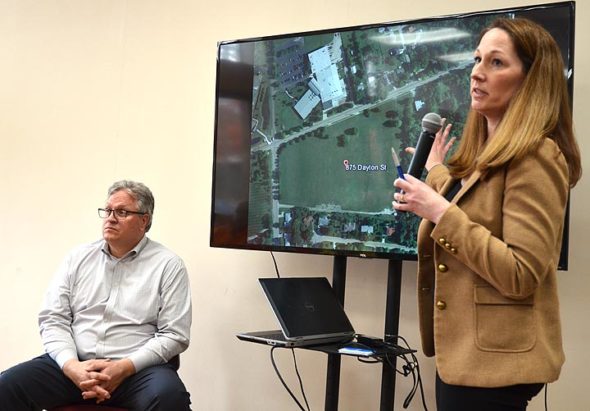 Renee Wawczak, the U.S. EPA’s project manager for the Vernay cleanup, presented the company’s latest plan to address contamination at its former plant during a meeting here on Thursday, Oct. 24. At left is Section Chief Mike Beedle. (Photo by Megan Bachman)

“It’s time for the cleanup to start,” longtime Omar Circle resident Talitha Greene told representatives from the U.S. Environmental Protection Agency during a two-hour meeting the agency hosted in the village last week.

The EPA came to share the status of the environmental cleanup at Vernay Laboratories’ former rubber manufacturing plant on Dayton Street and to hear from citizens on the proposed remedy.

The culmination of a two-decade long process, in June Vernay submitted its latest proposal to clean up contamination associated with its operations. The EPA is in the process of reviewing the plan and is interested in hearing from the public as it does, according to the site’s Technical Project Manager, Renee Wawczak, at the meeting.

“We really want to know what your feelings are moving forward,” she said. “That really helps us facilitate our discussions and our decision-making processes.”

“I am very excited to see so many community faces here tonight,” she said.

Close to 100 people packed into Bryan Center rooms A&B for the meeting, held on Thursday, Oct. 24, and largely taken up by a Q&A with EPA officials.

“We didn’t expect a turnout like this,” Gonzalez said.

Along with questions into the details of cleanup strategies and timelines were inquiries from neighbors worried they and their families may be at risk from the volatile organic chemicals, or VOCs, leaving the site in ground and surface water.

Chuck Buster, who lives on Dayton Street near the site, said he wants the contamination cleaned up — not just contained. He also wondered why his home had not been tested for the possible intrusion of dangerous vapors from contaminated groundwater under his property.

“My concern is, why didn’t I get a call to look into my basement?” he said.

Also present at the meeting were several former Vernay employees and family members of former employees, who questioned whether Vernay was responsible for the contamination, and defended the company’s actions.

“Vernay as a company did nothing on purpose to hurt anyone in this village,” said Paula Fugate, who identified herself as a 30-year employee of the company.

“If anything, they did everything they could to grow, maintain and see this village thrive,” she said.

In response, the EPA affirmed that Vernay had admitted to disposing VOCs, which it used to degrease metal parts at the factory for decades, through floor drains and sewers at the site.

Others raised questions about possible cancer clusters in the areas of Dayton Street, Wright Street and Omar Circle, as well as among former Vernay employees. The contaminants in question are known and likely carcinogens and nervous-system toxins.

The EPA responded that epidemiological studies are outside of their mandate, and that vapor tests in the area did not detect dangerous levels in homes.

But Greene, who said her mother, also an Omar Circle resident, was diagnosed with five different cancers, still wants the company to install vapor mitigation devices in area homes to prevent exposure to contaminants. It’s a measure not contained in Vernay’s current plan.

“I think that’s the least they should do for the neighborhood,” Greene said. 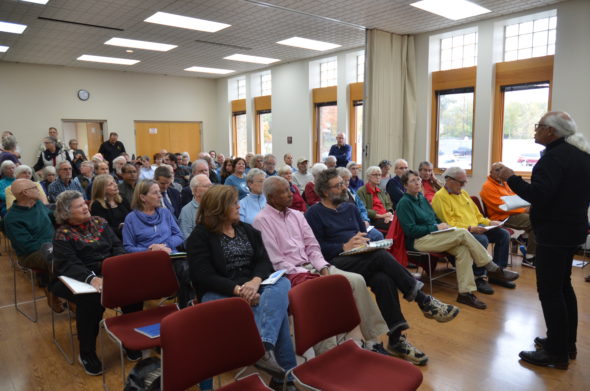 Rafael Gonzalez, the U.S. EPA Region 5 Community Involvement Coordinator, spoke to a crowd that swelled to close to 100 people during a public information session the agency held on the cleanup of contamination at the former Vernay Laboratories site on Dayton Street. Attendees asked questions about the proposed cleanup strategies and the possible current and future risks to human health. (Photo by Megan Bachman)

Wawczak kicked off the meeting by laying out Vernay’s latest proposal to clean up the property.

Vernay’s plan starts with the continued operation of its four pump-and-treat wells, which draw contaminated water up from the groundwater at the site, carbon-filter it and send it offsite. Wawczak referred to the wells as an “interim measure” aimed at controlling the source of contamination.

According to the EPA, those wells have been successful at shrinking the plume of contamination in the groundwater that now extends under Wright and Green Streets to Suncrest Drive but was historically much larger, Wawczak said at the meeting.

“We know where the leading edge of the plume is and where the concentrations are and we’ve seen it recede,” she said.

The plan also calls for the removal of contaminated soil in six “hot spots” on the property. In addition, existing storm sewers and other underground infrastructure on the property will be dismantled and a sewer line will be rerouted from Omar Circle to Dayton Street.

“More than 600 feet of sewer lines will be removed,” Wawczak explained of that effort.

Vernay would also add covenants to the property restricting it to industrial and commercial uses and push for the Village to pass a well-capping ordinance in the area. Vernay has already worked to close nine existing wells in the area, Wawczak said.

According to a draft timeline, the bulk of the measures could be completed as soon as March 2021, with the pump-and-treat system ongoing for several more decades. Vernay has estimated the price tag at $7.4 million over its first 30 years.

Wawczak ended her talk by emphasizing the importance of public feedback.

“Our decision-making process is driven in large part by public participation,” she said. “Before we get too far, we want to get comments up front so that everyone feels comfortable.”

Later in the meeting, Kaiser, the EPA attorney, called the plan a “strong proposal.”

“We feel we have some momentum and a certain commitment from Vernay,” he said.

If the EPA issues a statement of basis on the current plan, a public comment period is expected early next year, according to the agency.

Over the course of the meeting, attendees raised questions and concerns about the proposed cleanup strategy.

Gary Zaremsky asked if there would still be “offending material” in the area after the cleanup and, if so, what could be done about it.

“What happens to the remaining material that is contained on the site?” he asked.

In response, Wawczak said “a lot of the remedy is containment” but that the soil source removal is an effective corrective measure for reducing the contamination present onsite.

“It will take the worst offending material offsite and reduce the movement of contaminants in the groundwater,” she explained.

Wawczak added, however, that the site won’t be returned to its original condition.

“At sites around the country, most are never cleaned to prior to being contaminated,” she said.

Even though contamination may remain, redevelopment of the property is still possible, Wawczak said in response to another question.

Abinash Agrawal, a Wright State University professor who specializes in contaminated sites and is reviewing the plan for the Village, said that from his assessment,  too much contamination will remain after the cleanup. That’s because the site is “not right for natural attenuation,” a breakdown of the contaminants from biological processes over time, he said. Instead, techniques to stimulate naturally occurring bacteria should be explored.

“There is no talk of how the contaminants can be destroyed,” Agrawal said. “This site is not fit for degradation. … To make an argument that it is going to naturally disappear is false.”

Agrawal also criticized the pump-and-treat system, an approach he said “was abandoned 20 years ago” at other sites and that has only removed a small amount of contamination.

“They have removed 37 gallons of [the contaminant] PCE out of 200 million gallons of water in a 20-year time period,” Agrawal said, adding, “These chemicals are used in 55-gallon drums.”

In response, Wawczak said that the EPA is looking at additional technologies to address the onsite contamination, but did not specify what kinds.

One attendee argued that the plan was “more about containment than a remediation plan” and suggested a more aggressive approach.

“As a community we want more done,” the attendee said.

In response to a question from the News about the possibility that contamination might be migrating from storm sewer outfall into the creek that travels behind Park Meadows and flows into the Village-owned Glass Farm Conservancy Area, Wawczak said she was previously unaware of possible human contact with that waterway.

“It was brought to my attention that children go into that creek and dogs,” Wawczak said. “That was new to me.”

Asked about whether additional technologies might be employed on the site,  Wawczak said that it is reviewed every five years and that new strategies could be used “if the technology changes or improves or if the risk numbers change.”

“We’ll keep doing reviews of the site,” she said.

Worries over VOCs in water, vapor

The possibility that dangerous vapors could be entering local homes from an underground plume or flooding groundwater was a source of concern among several area neighbors who attended.

One area resident, who said she often has standing water in her basement, “which almost everyone in town has,” asked whether it could be contaminated.

Mangino, the EPA’s toxicologist, responded that it was possible.

“It could carry VOCs into the basement if that was possible,” he said.

Although the installation of vapor mitigation devices was not part of Vernay’s plan, Wawczak said that the current proposal addresses the vapor intrusion by rerouting the sewer and removing underground pipes. In that way, the step is a “protective measure,” she said.

“We concluded that the gas was moving along those storm sewers,” she said.

Lisa Abel requested that the EPA disclose more information about its vapor intrusion testing, asking, “How can people feel better about living there if there’s a plume below them?”

EPA representatives said that they tested five local homes three separate times over “a couple of seasons” and found that VOCs were not at levels of concern. The homes, whose locations they said they could not disclose for privacy reasons, were chosen for their likely risk, they added.

“We’re not trying to hide the results, I’m just careful we don’t use the meeting to violate privacy,” Mangino said.

The EPA also agreed at the meeting to release more data about the vapor testing that took place in local homes.

The EPA’s attorney could not answer a question from the floor about whether homeowners who sell or rent their properties in the area should be disclosing the possibility of contamination. But Beedle affirmed the safety of the area when it comes to vapor intrusion.

“At this point, with the sampling data we have, we don’t know of any property that is contaminated,” he said.

In addition to the public meeting, during their visit to town EPA officials also met with Village officials, Vernay representatives and the environmental consultant of a group of neighbors who won a lawsuit against the company in 2001.

Wawczak ended the evening by thanking villagers for coming out.

“It was very meaningful for me to hear from all of you.”