The majority of respondents to a Village survey on its temporary traffic project do not support making the changes permanent.

Those were some of the highlights of a Village survey on its three-week traffic trial, which involved several changes to downtown streets and parking areas.

Asked if the one-way design of South Walnut Street made school drop-off safer, 46% said it did, while 39% said it didn’t.

Village Manager Josué Salmerón addressed that result during Council’s Nov. 18 regular meeting, during which an initial summary of 599 responses were shared.

“This is a positive. Folks feel that this initiative, the one-way [on South Walnut Street] made it safer,” Salmerón said.

However, 56% of respondents did not feel safer using the crosswalks along South Walnut Street and Short Street, according to the survey.

Similarly, asked if the traffic pattern change had a positive impact on the safety at the intersection of South Walnut Street and Limestone Street, 50% strongly disagreed or disagreed, 33% strongly agreed or agreed and 17% neither agreed nor disagreed.

Salmerón said at the meeting that the next step is to compile all of the feedback collected on the project.

“I think we’ve gotten a significant amount of input on this project,” he said. “We’ll evaluate all of the positives and negatives.”

Salmerón added that some of the anecdotal feedback he received does not correspond with the survey responses.

“The anecdotal feedback I’ve gotten has been a very positive response to the initiative,” he said. “So we’ll reconcile the anecdotal information with the data.”

In addition, Salmerón said this week the Village is looking into whether duplicate surveys were completed, as an initial review of IP addresses indicates that may be an issue.

At the meeting, Council President Brian Housh said he especially heard positive responses about the project’s change of parallel parking to angle parking on the affected streets.

“I will say, every time I’m downtown, I hear how much people like angle parking,” he said.

In the survey, 40% strongly disagreed or disagreed that the traffic pattern change had a positive impact on parking along South Walnut Street, 33% strongly agreed or agreed that it did and 27% neither agreed nor disagreed.

Housh also said he was glad the Village completed the experiment, which he said showed “Council’s commitment to not doing anything permanently before we get feedback.”

“We learned something that we wouldn’t have, unless we tried it out,” he said.

Council members Kevin Stokes and Kineta Sanford also shared their thoughts on the initial survey responses. Stokes said as a south end resident, he welcomed the ability to drive north on South Walnut Street again. Sanford said the most important aspect of the trial was the addition of a dedicated drop-off lane in front of Mills Lawn.

From the floor, Lauren Miller requested Council compile the final cost of the experiment. Karen Wintrow suggested that the implementation of the Active Transportation Plan, the basis for the traffic trial, be “folded into the comprehensive plan.” Laura Curliss encouraged parents of Mills Lawn students to follow the school’s drop-off rules.

The survey was promoted in the YS News print edition and website, on the Village website, in emails from the school district, on the Village’s Facebook page, in Facebook groups, during Council meetings and at the YS Senior Center, where hard copies were available.

At least one other survey was executed during the trial. The News will report on that survey and other feedback to the temporary transportation project in upcoming issues.

Council voted 5–0 to approve the first reading of the Village’s 2020 budget.

The Village is projecting expenses next year of $15.4 million and revenue of $13.9 million, with a forecasted deficit of $1.5 million. However, Village leaders have said that deficit spending by the end of 2020 will likely not be that large.

The $15.4 million in expenses are allocated to the following funds:
• $8.4 million to the enterprise fund, to run the electric, water and sewer systems;
• $4.2 million to the General Fund, mostly police, administration, planning and Council;
• $1.6 million to special revenue funds, mostly for streets, parks and recreation and police pensions;
• and $1.1 million for capital projects, mostly in the water, sewer and electric systems, along with parks and facilities.

Ahead of the vote, Salmerón gave a presentation on the revenues and expenditures. 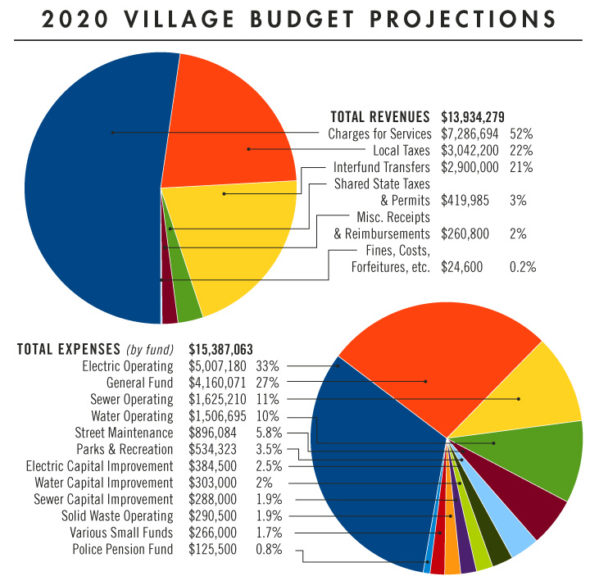 Council Vice President Marianne MacQueen addressed the projected deficit by emphasizing that the money for capital expenses has been saved over recent years.

“I think it’s important to point out that while we do have a deficit budget … that this is something we’ve planned for and are now doing it,” MacQueen said.

Council President Housh shared that in recent years, the Village has “right-sized” its funds to increase capital investments in local infrastructure. He also said that Council is looking to increase revenue sources as its expenses grow.

“The specter next year and moving forward is why we are so serious about talking about ways to enhance our revenue,” Housh said. “This will get tighter as we deal with crumbling infrastructure.”

Aaron Sorrell of Community Planning Insights, LLC, the company the Village hired to complete a mew Comprehensive Land Use Plan, gave an update on the process.

“We are well on our way,” Sorrel said.

The process kicked off with a public meeting on Sept. 25 attended by 80 participants, Sorrell said. In addition, 74 people have completed an online survey on local land use.

“Those focus groups enable us to have a really frank and detailed conversation to get at their needs and desires,” Sorrell said.

Sorrell said his firm is also coming up with designs for housing on the Glass Farm, drafting a future land use plan with development and annexation priorities, and devising scenarios for parking areas downtown, among other activities.

The next public meeting in the process will likely be in January, Sorrell said.

“Our next steps are to complete the focus groups and analyze the surveys,” he said.

A longer article on the process will be in an upcoming issue of the News.

Council took the first step towards placing the renewal of the Village’s five-year 8.4-mill property tax levy on the March 17 primary ballot.

Officially, Council voted 5–0 to ask the Greene County Auditor to certify its tax valuation to “determine the necessity” of the levy.

However, Clerk of Council Judy Kintner clarified on Wednesday that she had brought the levy resolution forward too early. The Village will aim to place the renewal levy on the Nov. 2020 ballot, Kintner.

Levy proceeds contribute $750,000 annually to the Village’s general fund, according to Housh at the meeting.

Housh called the levy “vital” and said that if didn’t pass, the Village would have to “pull back on capital improvement” and municipal services.

The property tax measure initially passed in 2006 by one vote, and was re-approved in 2011 and 2016 by larger margins.

Council passed a resolution opposing House Bill 242 “and its attack on home rule power” in a 5–0 vote.

House Bill 242, which is now in committee, would limit the ability of Yellow Springs and other charter communities to “impose bans and fees on single-use plastics,” according to the resolution.
MacQueen explained that if the bill passes, Yellow Springs would not be able to pass a measure banning plastic bags, for instance.

“It’s really critical to oppose this bill,” she said.

“We’ve seen so much denigration of home rule power, even though Republicans are supposed to be about local control,” Housh said.

Council’s next regular meeting is Monday, Dec. 2, at 7 p.m., in Council chambers.