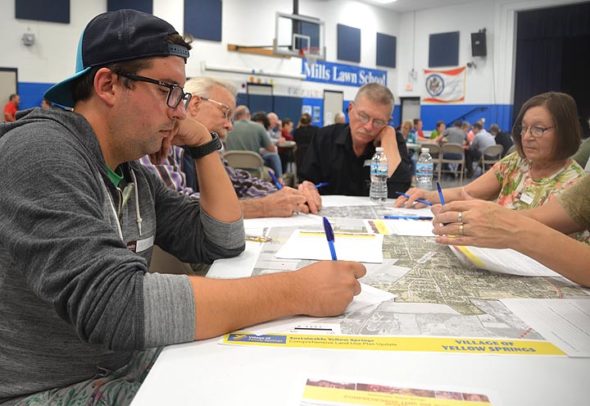 At the comprehensive plan kick-off meeting in September 2019, villagers, from left, Matthew Kirk, Jon Barlow Hudson, Alan Raney and Susan Stiles answered a survey question on the best thing about Yellow Springs. Another opportunity to weigh in on the future of local land use will be Thursday, Jan. 23, from 6:30–8 p.m. in the Mills Lawn gym, during a more casual, open house event. (Photo by Megan Bachman)

What do you want Yellow Springs to look like in 2035?

Villagers can help shape the future of town by contributing to the comprehensive land use plan now being developed by the Village of Yellow Springs.

At the drop-in event, attendees will be invited to share their thoughts on how — and where — they would like Yellow Springs to grow and change.

According to Aaron Sorrell, a Dayton-based consultant leading the process, public feedback is essential to coming up with a plan that reflects the desires of the community.

“It helps us drill down to the details of what will be acceptable for village residents in terms of the type of development they want to see,” he said.

The 15-year plan will include overarching goals and priorities for development as well as specific graphic renderings like a downtown parking plan and possible housing layouts for the Village-owned Glass Farm, Sorrell said. The plan is on track to be complete by March or April.

The Village’s last comprehensive plan was completed in 2010 and drew largely from a year-long visioning process undertaken in collaboration with Miami Township.

But whereas a vision “scans at a very high altitude,” a comprehensive plan “drills down on specific areas and parcels,” Sorrell explained.

“It sets the legal framework for rezoning or annexing certain parcels,” he said.

Village Planning and Zoning Administrator Denise Swinger, one of the municipal employees who will implement the plan, sees zoning as where the rubber meets the road.

“The comprehensive plan is the overarching goals, and the zoning is really how we can do it,” she said in a phone interview.

Swinger said she looks forward to some public guidance about “where we want to grow and where we don’t” and how specific parcels should be used.

The plan will also help the Village better plan for future public works projects and financial investments in local infrastructure such as streets and utilities, Swinger explained.

“This gives us a roadmap of where we’re going,” Swinger said.

A comprehensive plan is just that — comprehensive. Covered by the plan are community character, housing, economic development, transportation, education, sustainability, parks and recreation, arts and culture, public utilities and infrastructure, future growth and quality of life, Sorrell explained at a kick-off meeting for the plan last September.

Council President Brian Housh said at that meeting that having a plan is important in the context of change.

“If we want to maintain the excellent, welcoming community that we have, we can’t just stand still,” he said. “We have to think about moving things forward. Change is never easy, but there are a lot of … opportunities in Yellow Springs.”

Before looking at the village’s future, Sorrell started out his presentation last September with a look at the local present.

“From the document’s I’ve read, that seems to be a concern,” Sorrell added. “Some of those trend lines need to be reversed.”

Sorrell zeroed in on what he sees as the single biggest concern for the community’s future — affordability.

“There is an affordability issue here,” Sorrell said.

Specifically, the median home value, at $230,000, puts much of the housing market out of range of those living here.

“[The average person] doesn’t have the income to support the cost of a house,” Sorrell explained, “so they become house poor or are house burdened,” when they spend 30% or more of their income on their house.

But it’s not all bad news here, according to Sorrell, who noted that more younger adults are moving to the village.

“The one bright area of growth is when you look at the population, you’re going to see it’s tending more towards 30- to 40-year-olds moving into the village,” Sorrell said. “That seems to be your sweet spot.”

In addition, Sorrell later added, the town’s share of people who walk or bike to work is twice the national average.

The September meeting, attended by around 60 villagers and a dozen Village employees and elected officials, went on to include small group and large group discussions.

Participants responded to such questions as, “What’s the best thing about the village?” and “What challenges and opportunities does the community face?” and participated in a mapping exercise where they marked places in town they want to be developed or conserved.

Sorrell also set up meetings with “key stakeholders” to hear their thoughts on local land use.

“Those focus groups enable us to have a really frank and detailed conversation to get at their needs and desires,” Sorrell said at a Council meeting in November.

As a result of the public input he’s received up until now, Sorrell is starting to get a sense of where the community wants to go, he said. The meeting later this month will help refine those directions.

What has been said so far? Responses to the “best thing about the village” question at the September meeting yielded a variety of answers.

A downtown that is the “mark of a vital, intact community,” a location close to major cities, tourism, the Glen, “community feel,” excellent schools, intellectual resources, and “the whole package” were some answers to the query.

“A downtown that’s the envy of every town in Ohio,” one attendee said. “It is a place that has things like a pharmacy, a hardware store, a grocery store, a movie theater, coffee shops, restaurants.”

“We’re an Ohio version of an old, traditional New England village,” another chimed in. “That’s why we get so many tourists.”

Although someone from the crowd said that “tourism itself” might be a threat to the village, another responded that “we need tourism.”

“I think we’d be cutting ourselves off at the knees if we discourage tourism,” an attendee said. “We have to manage it. We need to have a balance.”

Others agreed with Sorrell’s suggestion that the biggest problem with tourism is “vehicular management.”

Asked, “what challenges does the community face over the next five to 10 years?” attendees responded: infrastructure (especially with climate change); Antioch College’s sustainability; the need for higher-paying jobs, affordable housing and housing for seniors; more interracial engagement; the need for long-term financial planning; and support for businesses.

“Antioch used to be the number one employer in town, so we lost a lot of tax base when they closed down and came back as small as they have,” one attendee noted.

Another raised a concern about the future of some “private spaces that function as public spaces,” such as the First Presbyterian Church and the Senior Center.

“There are a number of places in town where we rely on the goodwill of the people who own them in order to support our expectations of quality of life,” they said.

Tourism again came up as an area of disagreement during the discussion, with one person suggesting a survey of tourists to see if they are actually supporting the shops and lodging establishments. In response, one person called out, “If they’re in town, they’re spending.”

A third person suggested that some businesses in town could actually be negatively impacted by tourism, specifically those that cater to the local population or that don’t serve food.

The final question of the evening was about what opportunities villagers see over the next five years.

Finding ways for people to live and work here, especially with high-paying “white-collar jobs,” was one response. Other suggestions were to look at siting new businesses at Millworks, organic hemp production, making town more walkable and the “potential thriving” of Antioch College.

“The main reason Yellow Springs is what it is today is because of Antioch College,” another attendee said. “If we can bring Antioch back … everything else will fall into place.”

There was some debate whether the village has been successful at — and should focus on — attracting outside firms or not.

One person said that as a rural community the reality is to “grow our own business here.” Another contended that the village was successful in attracting Cresco and might be able to find others that “fit the values of Yellow Springs.” A third person said “it’s a fantasy” to think the town will be able to “re-create the past” with large industrial manufacturers.

How is the plan likely to get used? For one, several of those interviewed noted that this year’s plan won’t “sit on a shelf” as past plans, but will live online, where it can be more regularly consulted and updated.

Comprehensive land use plans are not legally required by the state of Ohio, although a process showing reasoning and forethought about local land use is. And, according to Swinger, such plans can help local communities better draft — and implement — their zoning regulations.

Over the course of Yellow Springs’ history, such regulations swung back and forth between eras of encouraging and restricting growth, Swinger noted.

For instance, in the 1960s and ’70s there was much concern about whether the village was growing too fast, with projections of exceeding the limit for a village of 5,000 people. Zoning was changed and the “greenbelt” was established.

“So they put in policies in the zoning code which made it more difficult to grow,” such as requiring larger lots and frontages, Swinger explained.

“Then they realized the reverse is happening,” Swinger said, as enrollment fell at Antioch and fewer school-age children were attending local schools.

The pendulum then swung again.

“The visioning and comprehensive plan of 2010 then said we really need growth,” Swinger said.

As result of that, the village’s most recent zoning code update, in 2013, made accommodations for more infill by allowing more flexibility in regards to lot splits, accessory dwelling units and lot frontages.

In addition to zoning changes, “guiding legislation” and changes to other local regulations could come out of the new plan, Swinger said. For instance, the local planning code hasn’t been updated since 1991, and references Greene County subdivision plans from 1982.

But times have changed, Swinger said.

“We’ve had climate change and more rainfall, so we want to give people the opportunity to mitigate the water on their property before it goes into our storm system,” she said.

When it comes to development in 2020, Swinger sees a need for more businesses and residences.

“We need more people to help spread the costs,” she said of local infrastructure.

There are growth opportunities on both the south and west sides of town. But first the community’s voice needs to be heard.

“We really need the community’s input on what they want to see,” she said.

Those who can’t attend the meeting can still participate in the process by visiting http://www.sustainableyellowsprings.com, where they can take a land use survey and participate in a mapping exercise to share their ideas for specific properties in town.