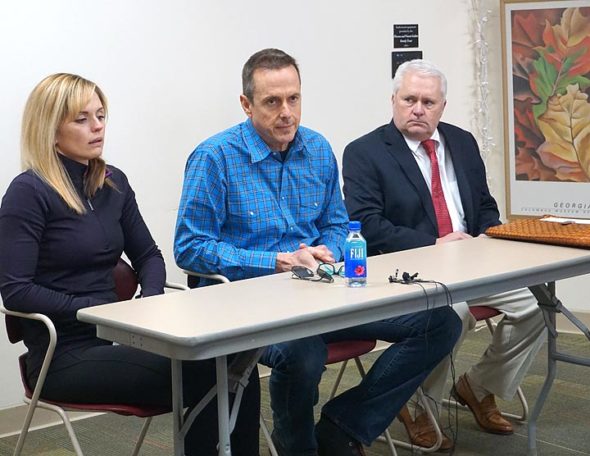 Molly and Linsdey Duncan, who were involved in a fatal shooting outside their home on Grinnell Road on Wednesday, Feb. 12, held a press conference Friday afternoon at the Yellow Springs Library. They were accompanied by attorney Gregory Lind, right. (photo by Megan Bachman)

Lindsey and Molly Duncan, the residents of the home on Grinnell Road, where two people were killed in a driveway “shootout” Wednesday, Feb. 12, held a press conference Friday afternoon in the meeting room at Yellow Springs Library.

The couple, who live at 3223 Grinnell Road, just south of Yellow Springs, appeared with attorney Gregory Lind and a handful of unidentified supporters to give brief statements about Wednesday’s altercation in which Lindsey Duncan’s ex-wife, Cheryl Sanders, and her husband, Robert “Reed” Sanders, died in an exchange of gun fire with home resident Lindsey Duncan.

The Greene County Sheriff’s Office and the Ohio Bureau of Investigation are continuing to investigate the case, which Sheriff Gene Fischer on Thursday said appeared to have been an “ambush” planned by the ex-wife and her husband.

Lindsey Duncan on Friday said Fischer’s description of the incident as an ambush is accurate.

“Sheriff Fischer used the exact right word,” Lindsey Duncan said at the conclusion of the press conference, which lasted less than eight minutes.

“An ambush is exactly what it was,” Molly Duncan said. “We were caught off guard. They said nothing and then they started shooting at us,” she said of the Sanders.

Previous statements to the press by Sheriff Fischer indicated that the Duncans reported immediately after the shooting that the man identified as Robert “Reed” Sanders was on foot and carrying a gun when he approached them in their car after they pulled into their driveway late Wednesday morning. According to the Duncans’ initial statements, Lindsey Duncan, who was in the passenger side of the car, got out with his own gun and exchanged words with Reed Sanders before shots were fired. Fischer, who likened the event to a “shootout,” said the Duncans told deputies that the ex-wife then pulled up in a car and got out with a gun, yelling and threatening to kill Molly.

On Friday, Lindsey Duncan told reporters that he and Molly had been in downtown Yellow Springs getting coffee and breakfast Wednesday morning before returning home, when “all of a sudden, hell began.”

He said that the man who approached their car wore a “camo” ski mask and held his gun “about 10 inches from [Molly’s} head.”

Duncan described his own reaction “as pure instinct.”

“Whatever happened wasn’t me, it was instinct,” he said.

A tearful Molly Duncan said she was grateful to be alive.

“I’m a mother, and I still get to see my children grow up,” she said.

Lindsey Duncan, who headed the Genesis Today health and wellness company and promoted green coffee bean weight loss supplements on such television shows as “Dr. Oz” and “The View,” has two college-age daughters from his marriage to Cheryl Duncan.

The ex-wife, also known as Cheryl Wheeler and Cheryl Dixon, was a spokesperson for health and fitness products and a movie stunt woman, working on more than 70 films, according to her IMDb, Internet Movie Databased, profile.

Sheriff Fischer said on Thursday that deputies found a pair of small cameras mounted on a stump across the road from the Duncans’ home that were supplying an image feed to a cell phone found in the ex-wife’s car. In addition, he said the car had counterfeit Ohio temporary tags.The ex-wife and her husband most recently were living in North Carolina, the sheriff said.

Officials anticipate that the investigation into the case will continue for at least three weeks. Final autopsy reports are expect to take six weeks, according to Greene County Coroner Kevin Sharrett.