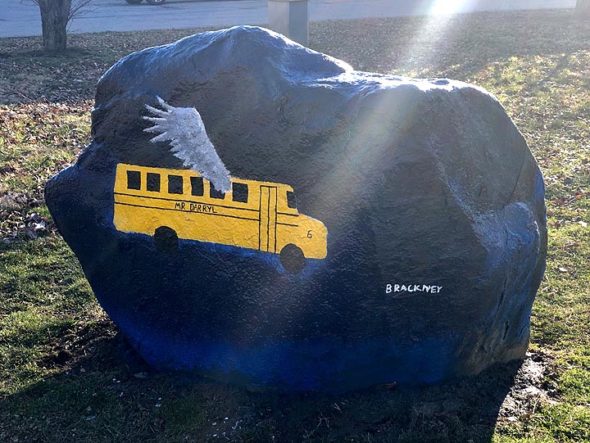 Mr. Darryl’s sudden death on the job Tuesday afternoon, Feb. 11, from an apparent heart attack while picking up students in the high school parking lot, has left the school community grieving the loss of “a great guy with a big heart,” as one parent described  him last week.

Sporting events were canceled Tuesday evening in deference to his death, and students at the high school created a wall of remembrance the following day with drawings and personal notes that were passed on to Dewer’s daughter. Both school principals also rode along on Dewer’s bus route Wednesday to comfort students, many of whom then wore black to school on Friday.

“It’s been a tough week,” Mills Lawn Principal Matt Housh said Thursday, adding that students and staff “came together as a community” to support each other.

For the schools’ weekly yoga session Wednesday afternoon, high school intervention specialist and yoga instructor Donna Haller announced that she would be leading  a more restorative practice to help students and adults process their grief.

Separately, she referred to “our dear Darryl” in speaking of the schools’ loss.

The school board recognized the loss by opening their meeting Thursday evening with a minute of silence in Dewer’s memory.

On Monday, high school student Carley Brackney, with assistance from her mother, Megan Brackney, put her feelings into art, painting the rock outside the high/middle school with the image of a yellow school bus flying on angel wings through a Bluedog blue sky, with “Mr. Darryl” written on the bus’s side.

“He was much loved,” Superintendent Terri Holden said this week.

Dewer’s daughter, Hyesia Dewer Cummings, said this week that the love was reciprocated.

He loved the students, she said, and he especially liked accompanying sports teams to away games and various school groups on field trips and competitions.

Members of the girls soccer team remember him sitting alone in the stands, in the rain, cheering them on at away games.

She said he called her amidst the weekend trip last spring.

Performance teacher Lorrie Sparrow-Knapp, who was on that trip, said she is heartbroken by Dewer’s death.

“Darryl Dewer was kind, funny, respected and deeply loved by kids, teachers and parents across our entire district,” she wrote in a remembrance, adding that her students are crushed by his death.

She said he cut his spring break short in order to drive to the thespian conference.

Dewer, 55, started working for Yellow Springs Schools as a substitute bus driver during the 2012–13 school year, according to the district’s Executive Assistant Steffanie Stratton. Records show he became a full-time driver in January 2014.

Cummings said her father moved here from Dayton soon after getting the local school job.

She said life in the village suited him.

“He was so happy,” she said, when he found an apartment he liked. Yellow Springs “was the place that was meant for him.”

She noted that he didn’t smoke or drink and lived a “healthy, wholesome life.”

She added that he meditated and walked every day, and frequently fasted.

An avid photographer, he posted pictures on the Yellow Springs Photographers’ Facebook page.

He also practiced the Philippine martial art of kaoi, and he was a well-known and respected break-dancer within that exacting world.

Cummings said her father’s dance specialty was pop and lock, and that dance friends from across the country were planning to come to the visitation, which was Wednesday, Feb. 19.

She said the outpouring of sympathy from everyone who knew her father had led her to extend the visitation hours to accommodate varying schedules.

She said her father, whom she described as a humble man, would have been surprised by the extent of grief felt by his loss.

“I just know he never realized how big of a deal what he did for everyone was,” she said. “For him, it was just normal. For everyone else, it was above and beyond.”

Cummings said her father will be cremated, and her hope is to plant a tree in the village in his honor later this year, with a celebration of life then.

“We’ll play music and have fun,” she said. She’s sure it would make him happy.