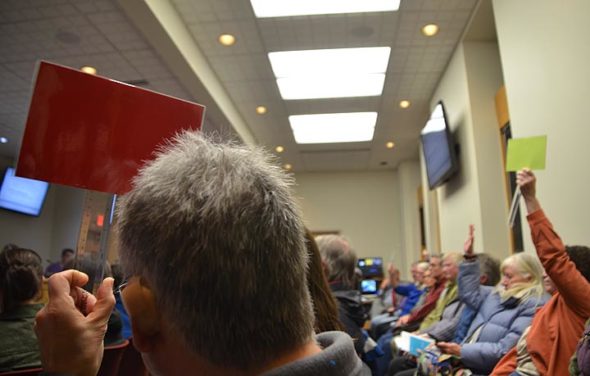 From January 2019: A small group of citizens used signs to express their approval or disapproval of statements made by Council and other citizens during a Village Council meeting. Council later banned signs, along with other expressions such as clapping, in a move that some villagers find troublesome. (Photo by Megan Bachman)

Citizens who attend Village Council meetings can once again express themselves through clapping, snapping and signs, Council decided at its Feb. 3 regular meeting.

Those rules came about after Council tried to stop incidents of clapping, snapping and sign-waving at Council meetings in early 2019, when a disciplinary matter involving a local police officer drew large, vocal crowds.

Ahead of the vote, Council members deliberated about a separate proposal to reduce the number of opportunities for citizens to comment during meetings.

That change would have limited public comments to the Citizens Concerns portion of the agenda, and a few other items specifically noted.

Currently, Council allows public comment on any item on its agenda.

Council Vice President Marianne MacQueen was the first member to speak out about her concerns of such a change, which she worried might “limit public participation.”

“I think it’s a major change and it concerns me,” she said.

Specifically, MacQueen was concerned about how Council would decide “what topics would be OK for citizens to talk about during the time of the discussion.”

Council members Lisa Kreeger and Laura Curliss later spoke up in support of not changing the process of citizen comments.

In explaining the proposal, Kintner said it is more in line with how other public bodies deliberate, and encourages citizens to come to meetings prepared.

“It puts the onus on the attendee to do their research ahead of time,” she said.

Council President Housh said the proposed rules would help streamline meetings. Council had decided at its January retreat to try to reduce the length of Council meetings to two hours.

Former Council member Judith Hempfling spoke from the floor that the back-and-forth debate at local Council meetings is more democratic.

“Efficiency isn’t the only goal of your discussions, it’s coming up with the best decision,” Hempfling said. “I think citizens will feel cut out with this kind of process,” she added.

In the end, Council decided to keep the process for citizen comments as it was.

•Tecumseh Land Trust Director Krista Magaw gave an update on the group’s progress to preserve land in the Jacoby Greenbelt west of Yellow Springs. The Village has committed $200,000 from its greenbelt fund for easements in the area.

Magaw said land trust staff have contacted 80 landowners in the Jacoby Creek watershed, many of whom don’t farm and didn’t know much about farmland preservation.

“We’re getting some good results,” Magaw said. “We’re experiencing a lot of good communication between landowners and their farmers.”

Magaw also shared that the group is working to improve water quality in the watershed by funding conservation practices there through a $3.2 million grant it received in 2018.

Holden summarized the Facilities Task Force’s efforts over the last 10 months, which included a new building assessment and prioritizing improvements to the local elementary and high school/middle school.

Holden added that the final decision to move forward with a solution to facilities issues lies with the school board, and that she believes, “the approach is a K–12 approach or no approach at all.” She also emphasized that collaboration across local groups was essential.

“It’s a fragile ecosystem, and we survive together,” she said.

• During Citizens Concerns, Hempfling spoke on behalf of Greene County Citizens Against the Giant Jail Tax. That group is opposing the proposed sales tax to build a new — and larger —county jail, which will be on the March 17 primary ballot.

Hempfling asked Council to pass a resolution and send a letter to the Greene County Commissioners stating the Village’s opposition to the measure. Council will consider doing so at a future meeting.

• Council discussed its 2020 goals, but did not officially pass them.

• Council met in executive session for the purposes of the evaluation of a public employee. No votes were taken.

Council’s next regular meeting is Tuesday, Feb. 18, at 7 p.m. in Council chambers. The meeting is a day later due to the Presidents Day holiday.