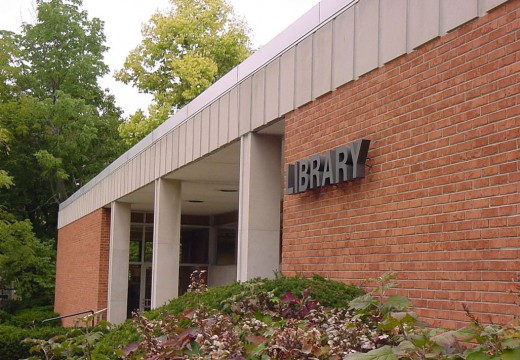 Free speech and the library

A local group organizing against Issue 12 — the sales tax levy to fund the construction of a new jail for Greene County — was turned away from Yellow Springs Community Library’s meeting room last week. Local library staff cited a portion of the library’s meeting room policy that prohibits “political campaign meetings” from occurring in the space.

While the group had met in the room on three prior occasions, it had been doing so in violation of policy, according to library staff, who canceled a reservation for a future meeting.

The group found an alternative meeting venue in Yellow Springs. But the instance prompted the News to more closely examine the library’s meeting room policy and the relationship between such public spaces and the First Amendment, which protects free speech and other basic rights.

The Yellow Springs library is part of the Greene County Public Library system, a county district library formed under the Ohio Revised Code. There are seven libraries in the system, and a seven-member Board of Trustees drawn from different home libraries makes policy for the district.

The Board of Trustees meets monthly, the second Wednesday of the month, and its meetings are open to the public.

Five of the system’s seven libraries provide meeting spaces that are free and open to non-library groups, by reservation and within certain guidelines. Those guidelines define what types of groups and uses are permitted, as well as specifying meeting room rules and procedures.

The same policy applies to all public libraries in Greene County. Posted to the Greene County Public Library, or GCPL, website, the policy reads, in part:

“Community groups whose purposes are non-profit, civic, cultural, or educational are encouraged to use the various library meeting rooms for group meetings when the rooms are not being used for their primary purpose: library-related activities.

Meeting rooms may not be used for social activities; private parties; commercial purposes/endeavors or gatherings that advertise a product or service; or political campaign meetings.”

The current library meeting room policy dates back to February 2009, when the library board unanimously passed several changes proposed by Greene County Prosecutor’s Office civil attorney Elizabeth Ellis, who acts as legal counsel to the library.

The stated impetus for the revision of the GCPL meeting room policy was a federal district court lawsuit involving a religious group denied access to a meeting room in the Upper Arlington Public Library, located outside Columbus. In October 2008, a couple of months after the court found in favor of the religious group, GCPL Executive Director Karl Colón recommended that the Greene County library system update its own meeting room policy. That was accomplished the following February, with the new language about political campaigns and other changes.

In fact, the Upper Arlington Public Library court decision was a turning point for libraries around the country, according to Deborah Caldwell-Stone, director of the American Library Association’s Office for Intellectual Freedom.

“Libraries thought for a long time that because of the establishment clause they could not favor religious groups” by granting them access to their meeting rooms, Caldwell-Stone said in an interview with the News last week.

The establishment clause refers to the part of the First Amendment that prohibits Congress from making laws “respecting an establishment of religion, or prohibiting the free exercise thereof.”

At least a dozen appellate court decisions have followed essentially the same lines, upholding the right of religious groups to meet for various purposes in public library meeting rooms, according to Caldwell-Stone.

Reached by the News for comment about the 2009 change in the GCPL meeting room policy that bars “political campaign meetings” from being held there, library counsel Ellis referred to the Upper Arlington case.

“I drafted it based on that,” she said last week.

Probed regarding the relationship between religious use of the space and political campaign meetings, Ellis stated that the overall goal of the policy was to ensure that the library was “a neutral place.”

“The library needs to be as neutral as possible,” Ellis said.

Prohibiting political campaign meetings is a component of that neutrality, regardless of the specific issue or candidate focus of the group.

“It’s politics with a small ‘p,’” she said of the encompassing nature of political campaign activity barred from Greene County libraries.

Ellis added that the revised meeting policy was supported by case law relevant to the First Amendment.

But another view of the county’s meeting room policy is suggested by the American Library Association’s Library Bill of Rights.

That document consists of “unambiguous statements of basic principles that should govern the service of all libraries,” according to text accompanying the Library Bill of Rights on the American Library Association, or ALA, website.

The sixth of seven statements reads: “Libraries which make exhibit spaces and meeting rooms available to the public they serve should make such facilities available on an equitable basis, regardless of the beliefs or affiliations of individuals or groups requesting their use.”

Restrictions on meeting room use “should not pertain to the content of a meeting or to the beliefs and affiliations of the sponsors,” the interpretation states.

The interpretation also specifies that meeting room policies should be written in “inclusive rather than exclusive terms.” The interpretation continues, “For example, if a library allows charities and sports clubs to discuss their activities in library meeting rooms, then the library should not exclude partisan political or religious groups from discussing their activities in the same facilities.”

Another ALA interpretation focused on politics in the library makes a similar point.

“If a library has designated a space for community use, it must make that space available to all community organizations and groups regardless of their views or affiliations,” the interpretation states. The interpretation goes on to highlight the “essential characteristic” of American libraries in providing access to ideas and opinions.

Yet in reality, many public libraries do draw limits around who can and cannot use their meeting rooms, according to the ALA’s Caldwell-Stone.

“All library politics are local,” she said, noting that a range of factors, including community values, state and local laws and the library’s defined mission, come into play when a library system crafts policies for meeting rooms and other aspects of its facilities.

“There’s nothing inherently wrong with public meeting rooms being used to discuss politics,” she said, following the interpretation of the Library Bill of Rights.

But library boards may be wary of controversy, she acknowledged.

“Some library boards don’t want to be seen as taking one side or another,” Caldwell-Stone said.

While religious groups and others have sued libraries for access to their meeting rooms, groups denied access based on political activity have tended not to, according to Caldwell-Stone.

“There’s no case law on this,” she said.

Asked by the News whether the Library Bill of Rights was a binding document for libraries, she said it was not.

However, many libraries adopt the Library Bill of Rights as part of their library policy, Caldwell-Stone added.

Asked by the News whether Greene County Public Library had done so, Executive Director Colón said last week that it had not.

And asked by the News whether library counsel had consulted the Library Bill of Rights while crafting the 2009 revision to the GCPL meeting rooom policy, Ellis replied that she wasn’t familiar with the document by name, but had taken part in an ALA training prior to drafting the revision.

Describing the GCPL revised policy at the time of its creation in a report to library trustees, Colón wrote that it “is suitably sensitive both to the First Amendment rights of all patrons and the GCPL’s need to ensure the undisrupted flow of library services to all patrons.”

‘Not an exact art’

“It’s not an exact art,” she said of libraries crafting and implementing policies that protect and promote the First Amendment within their particular community.

Colón last week offered his view that the “political campaign meetings” prohibition in the GCPL meeting room policy preserves the neutrality of the library for all community members.

“The library is meant to be welcoming and open to everyone,” he said.

Not all political activity is barred, just activity that involves advocacy, Colón clarified.

“Political information is welcome,” he said. “The difference is in the advocacy piece … when a group is saying vote for this or that.”

In an email this week, he gave as an example the “Beavercreek Matters” series focused on local issues at the Beavercreek library meeting room. That forum is permitted because it includes “a variety of viewpoints,” he wrote.

Political groups that fall outside the library’s policy “very, very rarely” request use of the meeting room and thus are rarely turned away, according to Colón. The only other example from the past couple of years of a group denied GCPL meeting room access, aside from the recent instance in Yellow Springs, was the local chapter of Indivisible, a national progressive advocacy network, he said.

Yet the distinction between “political information” and “advocacy” may be subtle, as the ALA itself acknowledges. Another ALA statement on meeting rooms reads, “An individual or group should not be denied access to the library’s meeting room because they intend to engage in political speech, to meet with constituents or to discuss partisan views.” But it goes on to offer: “Partisan campaign events may be inconsistent with the library’s mission and should be addressed in library policies.”

Caldwell-Stone affirmed that libraries can place some limits on aspects of free speech within their spaces. But those limits have their own limits, she added.

“Libraries do have obligations under the First Amendment that are binding,” she said.