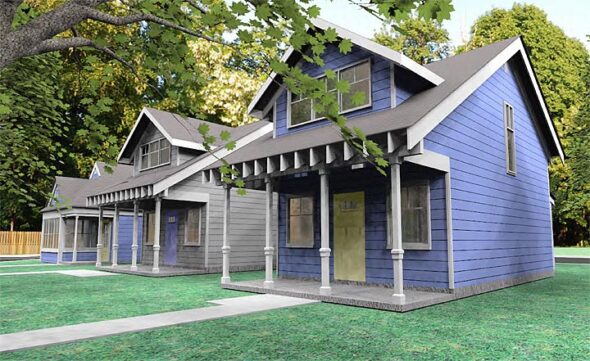 Home, Inc.’s planned Glen Cottages pocket neighborhood at 1133 Xenia Ave. is moving ahead. The above artist rendering shows several of the dwellings intended for the site, which will feature six single-family cottages and three rental garden cottage duplexes, for a total of 12 units. Located on just over an acre, the neighborhood is geared to diverse populations and incomes. (Rendering by Kurt Lamm, provided by Home, Inc.)

Glen Cottages, Home, Inc.’s planned pocket neighborhood at 1133 Xenia Ave., got the go-ahead from Planning Commission at its Feb. 11 meeting.

After extended discussion and a lively public hearing, the local planning board voted 3–1 to approve a conditional use permit for the pocket neighborhood. Council liaison Laura Curliss voted “no” because of parking issues affecting residents on adjacent Woodrow Street.

The new neighborhood will be located on 1.118 acres of land situated on the east side of Xenia Avenue north of Woodrow Street and adjacent to Friends Care Center property. It will feature six single-family cottages and three rental garden cottage duplexes, for a total of 12 units.

The mix of units will serve people with incomes ranging from 50% to 120% of Area Median Income, or AMI, with an emphasis on diversity and inclusivity among residents, according to Home, Inc. Executive Director Emily Seibel at the meeting.

“There’s a real range intentionally,” she said, adding that the Village’s evolving Comprehensive Land Use Plan “affirms the choices we’ve made.”

Seibel also noted that the concept for Glen Cottages came from the Village’s Housing Needs Assessment, conducted by an outside firm in 2017.

All funding for the approximately $2 million project has been committed, according to a Home, Inc. project narrative. The project is scheduled to break ground in 2020.

Most of the discussion and public hearing centered on the parking impact of Glen Cottages on neighboring Woodrow Street. A change to the previous site plan, necessitated by feedback from Miami Township Fire-Rescue Chief Colin Altman, resulted in a fire lane being created on the southern edge of the property.

The fire lane’s placement eliminates an estimated five to six parking spots on the northern side of Woodrow Street, a no-outlet street that Public Works Director Johnnie Burns testified is extremely narrow. Residents from Woodrow, which contains two houses and an apartment building, testified at the hearing that the loss of those spaces would negatively impact their quality of life.

“Parking is huge,” Paula Womacks said. “There is absolutely no parking already.”

Residents rely on the spaces that will be eliminated to accommodate visitors, she and others explained.

“Do not infringe on Woodrow,” he urged the planning board.

Planning Commission members discussed the parking matter extensively. Zoning Administrator Denise Swinger clarified that the parking issue pertained only to the neighboring street, and that the Glen Cottages neighborhood itself contained an appropriate number of parking spaces, as per Village code.

For this reason, Stiles said she was uncomfortable not approving the permit.

“It meets all the requirements. What will it take for them to get it approved?” she asked.

In response to the concern over parking, Seibel offered that Glen Cottages could provide access to at least five of its planned 18 parking spaces to guests of Woodrow Street residents. She also pledged that Home, Inc. would work with residents to address the parking issue in other ways, if possible.

Moving the discussion to next month’s meeting was problematic, she added, as Home, Inc. faced a mid-March deadline involving one of the project’s funders.

The vote on the Glen Cottages permit was passed on those terms, together with other conditions recommended by Village staff.

Glen Cottages was previously approved as a Pocket Neighborhood Development, or PND, a relatively new addition to Yellow Springs’ zoning code. Village Council approved the PND housing option in October 2017 as a tool for smaller, denser housing in Yellow Springs. Home, Inc. at the time had discussed with Council its plans for Glen Cottages.

Other items from Planning Commission:

• The local planning board also approved a conditional use permit for Akhilesh Nigam of Aahar India to move his mobile food truck to a different location in the parking lot next to Corner Cone. The vote was 4–0.

New state fire code regulations enforced late last year by Miami Township Fire-Rescue prompted the change in location. Nigam, a Beavercreek resident who has operated a food truck next to the Corner Cone at 101 S. Walnut St. for 10 years, is working with the lot’s owner, Lawren Williams, to tap into Village electric. According to Nigam last week, it remains unclear whether or how the food truck will access electricity at its new location in the lot. Williams spoke in Nigam’s favor at the public hearing, describing him as “a good member of the community.”

Pending the public hearing, Aahar India has been operating outside of Yellow Springs since January. The food truck is currently located at Suburban Extended Stay Hotel, 3845 Germany Lane, Beavercreek.

• Planning Commission denied a conditional use permit for a local resident who has been operating a solar installation business from his West Davis Street home. After a lengthy and sometimes heated exchange with the applicant, the planning board voted 2–2 to deny a home-based business permit to Brett Henderson, proprietor of Yellow Springs Solar. Curliss and Pallotta voted “no,” with Pallotta stating his view during the discussion that the solar operation represented “more of a light industry” than a true home business.

Henderson refuted claims that his business was conducted in a way that violated local zoning code, specifically stating that he did not receive commercial deliveries to his home, nor did he store solar panels and other materials on site.

The solar panels currently on his property were slated for “upcycling” as fencing material, and other scrap materials were being kept for use in his personal art projects, he said.

“I don’t get any deliveries to my house for my solar business,” he stated.

Henderson added that he believed Planning Commission was unfairly targeting him.

“You’re trying to make a case against me,” he said.

Local resident Mitzie Miller, a backyard neighbor who resides on West Limestone Street, spoke at the hearing and shared photos of what she believed to be commercial deliveries to his home.

“This is a residential area. … Safety is a real issue in the neighborhood,” she said.

West Davis Street neighbor Andrew Kline also spoke, saying he had “no problems to date” with Henderson’s business, but stressing that he did not believe home businesses should receive commercial deliveries or store materials on site.  A third neighbor, Kate Polak, submitted a letter asking Planning Commission to protect the residential character of the neighborhood.

Swinger stated at the meeting that Henderson can apply for a home-based business permit waiver as a potential next step.

• Planning Commission voted 3–1 to recommend a villagewide ban on roosters in residential areas of Yellow Springs, with Curliss voting “no.” Curliss stated that she believed that regulating roosters in the village was a law enforcement issue, not a matter for the planning board.

Planning Commission had previously discussed the issue at its Jan. 14 meeting, following a recommendation from the zoning office that such a ban be considered.

Village code doesn’t currently specifically prohibit roosters, though it does permit local government to follow up on complaints related to noise and odors from birds and other animals. The Village noise ordinance also specifies certain decibel limits for noise.

The rooster ban proposal stems from a dispute between neighbors on Northwood Drive. Two roosters kept on the Miami Township portion of one neighbor’s property have caused significant disturbance to the other neighbor over many months, according to that neighbor.

Dione and Saul Greenberg, the neighbors who have complained to the Village regarding the roosters, spoke publicly on the issue for the first time during the Planning Commission hearing.

“This has gone on for a really long time. …We’ve felt trapped in our house [as a result of the noise],” Dione Greenberg said.

“There’s no way to not hear the roosters. It’s disruptive to my living on my property,” Saul Greenberg added.

Village Solicitor Chris Conard stated that the Village was going to take “enforcement action” against the owners of the roosters. Responding to a follow-up question from the News, Conard said that the roosters’ owners had not yet been cited, and that he had received a letter from their attorney requesting mediation. That request has been passed along to the complainants, he added.

• The planning board deferred consideration of proposed new stormwater guidelines for residential developers.

Planning Commission’s next regular meeting is scheduled for Tuesday, March 10, at 7 p.m. at the John Bryan Community Center.