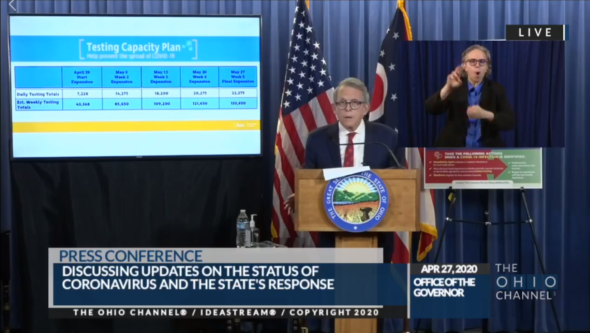 Ohio businesses will reopen in phases, alongside expanded testing and contact tracing in the state, according to Gov. Mike DeWine on April 27.

Ohio’s stay-at-home order expired on May 1. That morning, Gov. Mike DeWine announced a new order, called Stay Safe Ohio, to replace the previous directive that Ohioans shelter in place in an effort to contain the spread of COVID-19. The new order has an end date of May 29, unless amended.

Ohioans spent nearly six weeks under the stay-at-home order. By last weekend — at least judging from the jump in visitors to downtown Yellow Springs and reports of similar crowds around the state — Ohioans seemed ready to get out.

But how different is the new order from the previous one? What does it allow that the earlier order did not?

In some respects, the two orders are quite different. The stay-at-home order, originally issued on March 22 and amended on April 6, closed nonessential businesses and operations in the state. The order set forth a list of essential businesses that were permitted to remain open, ranging from grocery stores, gas stores and financial institutions to social service organizations, news media and the post office.

Residents of the state were limited to their homes except for carrying out essential activities such as shopping for groceries and other household supplies, performing essential work activities and caring for family members.

The new order, by contrast, officially reopens many sectors of Ohio’s economy: nonessential medical care (May 1); manufacturing, distribution and construction (May 4); general office environments (May 4); and consumer, retail and service businesses (May 12). The order followed Gov. DeWine’s announcement of a phased reopening of Ohio earlier in the week.

The Stay Safe Ohio order contains specific measures required of businesses as they reopen. These include social distancing requirements, a requirement that employees wear face coverings in most cases and protocols for monitoring employee health.

Significantly, the Stay Safe Ohio order also loosens the previous stay-at-home measures by expanding the businesses and activities Ohioans are permitted to leave their places of residence to participate in. Despite this loosening, both orders have the same basic purpose, as stated in their text: to keep Ohioans at home as much as possible to contain the spread of COVID-19, and to require that the state’s residents remain socially distanced from others when out in public.

So is the new order a stay-at-home directive, or something else?

At Friday’s briefing announcing the order, DeWine indicated clearly that the new order had changed the rules for Ohioans.

“It’s not a stay-at-home order. We have reached a new stage,” he said.

Asked whether Ohioans could go shopping “just because they feel like it” under the new order, DeWine responded that they could.

That message somewhat conflicted with a response DeWine offered to a question earlier in the week. Asked if the May 12 retail reopening amounted to an effective lifting of Ohio’s stay-at-home order, then still in place, he said it did not.

Alongside the loosening, the governor has consistently emphasized that Ohioans need to observe social distancing requirements when they go out in public. People need to balance enjoyment and safety, he said.

“We’re on two tracks: staying safe and opening up,” he said on Friday.

Asked at this Monday’s briefing whether Ohio had criteria for going back to a stricter form of the order if warranted by an outbreak of COVID-19, DeWine said that no such criteria had been set. However, the Stay Safe Ohio order specifies that restrictions will be lifted in the event that the situation in the state improves — and, conversely, that “additional targeted restrictions will need to be made” if the situation deteriorates.

The new order came as the coronavirus continued its spread in Ohio. Deaths in the state from the virus hit 1,000 last Friday, the day the new order was announced, and cases climbed through the weekend to top 20,000 this Monday. As of Monday, Ohio began reporting 21-day trend data, replacing its previous five-day trend lines. The longer-term trend data shows that cases, deaths, hospitalizations and ICU admissions continue to rise in the state, though at rates below the 21-day average. Cases, for example, rose by 560 between Sunday and Monday, below the average daily increase of 643 during the 21-day period. On Tuesday, however, deaths, hospitalizations and ICU admissions all rose sharply.

Nationwide, 1.1 million cases of COVID-19 had been confirmed as of Monday, and over 68,000 Americans have died from the disease. Despite the continued spread of the virus, about half of U.S. states are taking steps to reopen, according to an analysis by the New York Times. An internal Trump administration report obtained by the Times expects U.S. deaths to reach 3,000 per day by June, a 70% increase over the current death rate. The same document expects cases to rise to 200,000 per day, up from about 25,000 currently.

Asked on Monday whether Ohio has developed projections for new cases and deaths between now and June 1, Ohio Health Director Dr. Amy Acton replied that the state has not. But Ohio officials are monitoring the numbers, and the state will “definitely see more spread” as restrictions are lifted, she said.

Acton did not provide a direct answer to a separate question about what Ohio officials consider an “acceptable spike” in cases that could follow the reopening of bars and restaurants — a step Ohio has not yet taken. But she emphasized the importance of face coverings and social distancing in helping to prevent future outbreaks.

“When we don’t wear these masks or we pretend this virus is not here, and this virus spreads rapidly and there are many, many outbreaks, people will panic,” she said.

Face masks have become controversial in the state. Last Monday, DeWine announced that Ohio was mandating them for all customers of retail establishments, then reversed himself the next day. Per the Stay Safe Ohio order, most employees at all businesses are required to wear face masks, while customers are not. Businesses can, however, mandate that their customers wear such coverings.

Acton on Monday described mask-wearing as a form of social responsibility, especially in retail settings where employees “are there working on your behalf.”

“It’s the right thing to do,” she said, one of several strong statements on the importance of safety measures.

And Acton implicitly addressed skepticism and criticism by some Ohioans who have blamed her and the news media for overblowing the coronavirus pandemic in Ohio. She urged Ohioans to shift their behavior out of respect for the “reality of this virus.”

“We have to accept that we’re living in a new world,” she said.

At the opening of Monday’s briefing, DeWine addressed such criticism directly, urging demonstrators at the statehouse to “go after me” for decisions related to the state’s response to the coronavirus. The governor said it was “not fair game to disrespect the news media” or target Acton or her family with criticism.