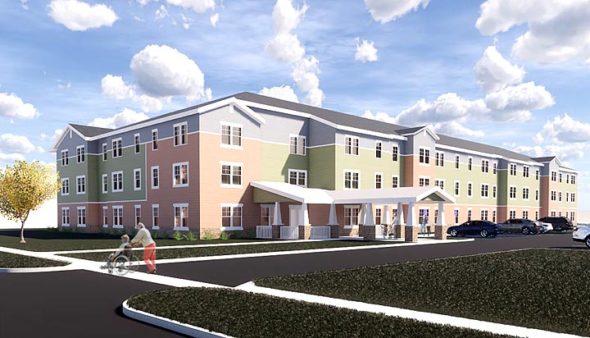 The new design of senior apartments slated for construction between East Herman and East Marshall streets shows a three-story, rather than four-story, building with a larger footprint. Village officials deemed the changes “minor,” and Council granted developers Home, Inc. and St. Mary of Dayton a one-year extension of its zoning approval last week. (Rendering by ATA Beilharz Architects)

A planned 54-unit senior apartment building in Yellow Springs was turned down for funding for the second consecutive year.

Several years in development, the apartment building is a joint project of Home, Inc. and its development partner, St. Mary Development Corporation, of Dayton. Project developers sought federal housing tax credits and other funds through the Ohio Housing Financing Agency, or OHFA, to offset about $7.5 million of the project’s approximate $10 million cost.

But the project wasn’t awarded tax credits in the 2020 funding round, whose results were announced May 20. The process is competitive, with 37 affordable housing developments out of 88 applicants statewide awarded more than $31 million in tax credits this year. Home, Inc. and St. Mary were also turned down in 2019 for the same project.

Between funding rounds, the developers modified aspects of the design to bring down costs, including reducing the apartment building to three stories from four. The four-story structure, planned for a 1.86-acre parcel between Marshall and Herman streets, had been controversial among some in the village for its height.

Home Inc.’s executive director, Emily Seibel, said this week she was disappointed but not surprised by the latest result. The process is highly competitive, and developers often apply more than once, according to Seibel. In addition, the 2020 application cycle for new affordable housing in nonurban areas favored projects located in Appalachian counties in order to address past inequities in housing financing directed to those areas.

Seibel vowed to press on with the project, which she said is urgently needed in Yellow Springs. Affordable housing for seniors has long been an identified need in the community, with local seniors waiting for some form of the current project for nearly nine years, Seibel explained.

“We’re continuing to gain momentum and visibility. It’s a step in the process,” she said.

“We have a good partnership. We just have not hit the spot yet,” he said.

A nonprofit affordable housing developer with 69 developments completed or in process in 11 states, St. Mary has previously applied to OHFA more than once for projects that ultimately got funded, according to Young. The developer has not often applied three times for the same project, however.

“It’s unusual to apply three times, but we would do it,” he said.

St. Mary has at most a 50% success rate at getting projects financed through OHFA in any given year, he said. In the current cycle, two of four St. Mary projects were awarded tax credits.

While both parties remain committed to the project, they likely won’t reapply in 2021. That’s because many of the same guidelines in place this year will remain part of the 2021 cycle, including, most likely, the preference for housing developments in Appalachian areas.

Unless the guidelines change more than is expected next year, “it makes no sense to apply,” Young said.

The scoring process is tight, with five extra points awarded to applicants proposing projects in Appalachian counties, as the rules stand now. That makes it “virtually impossible” for projects in other areas to score enough points to be awarded funding, according to Young, who added that seven of the eight winning projects in the nonurban category were located in Appalachian parts of the state.

The Yellow Springs project also lost some points in the category of “leverage,” meaning outside funding brought to the project, and in the categories of “aging population” and “housing need.” The latter categories may come as a surprise to seniors who live in Yellow Springs, where the population tilts older and housing costs are high relative to median income. But those categories are tied to Greene County as a whole, not to the village specifically, according to Young.

Regarding leverage, funding from a source brought to the table by St. Mary ultimately did not count in the scoring, leading to a deduction of points. Local funding included support from the Morgan Family Foundation for Home, Inc. to purchase the land parcel from former owner Wright State University, and the Village’s waiver of utility tap-in fees.

“Everybody did everything they could, including Yellow Springs,” Young said.

Seibel hopes to argue for changes to the 2021 rules during an OHFA feedback session, which takes place this week. Draft guidelines are currently circulating, and will be finalized later in the summer.

If the developers do wait until 2022 to reapply, and receive funding, the project would likely be built by around mid-year 2023, according to Seibel.

Locally, Home, Inc. and St. Mary would need to reapply to the Village for approval of their Planned Unit Development, or PUD, preliminary plan. Late last year, the developers were granted a one-year extension on their original approval, but Yellow Springs zoning code only allows for a single extension.

The developers would not, however, have to reapply for PUD zoning, according to zoning administrator Denise Swinger last week. The PUD zoning that applies to the parcel would remain unchanged unless Village Council had a reason for seeking a zoning change, she said.

Seibel said she doesn’t foresee major changes to the apartment building’s design or other aspects of the project going forward. The existing design reflects “listening sessions” with seniors in the village and aligns with the Housing Needs Assessment prepared for the Village by an outside firm in 2018.

Asked by the News whether the developers could seek financing from another source, both development partners said the federal housing tax credit program, administered in Ohio by the OHFA, is the main mechanism for developing larger-scale affordable housing in the United States.

Home, Inc. is meanwhile addressing the housing needs of seniors on a more limited scale through its Forest Village rentals, located at two sites on Dayton Street, and its planned Glen Cottages pocket neighborhood at 1133 Xenia Ave., which passed Planning Commission earlier this year and is “ready to launch,” according to Seibel at Home, Inc.’s 2020 annual meeting last month.

Both projects set aside some units for those with special needs, which could include seniors, Seibel said.

But she acknowledged that for Home, Inc. and the seniors they hope to serve, the wait for a larger-scale, dedicated solution to senior affordable housing in Yellow Springs goes on.

“It’s hard to be patient because the need is so dire,” she said. “But we have to be persistent and continue moving forward.”