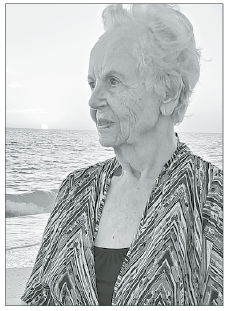 Annemone Ingrid Keller passed away suddenly on July 20, 2020, while gardening at her home in Yellow Springs. The cause was a heart attack related to congestive heart failure. She was born in Breslau, Germany, on June 22, 1940, to Julius and Magdalena Kreisel.

Annemone is survived by her two children, Corinna and Andreas Keller, both graduates of Yellow Springs High School. She recently lost her husband, Wilfried, in September of last year, after a prolonged battle with heart issues.

Corinna lives in Miami Beach, Fla., with her husband, Joaquin Heras, and two children, Anneka (16) and Joaquin Jr. (15). Andreas lives in Dexter, Mich., with his wife, Charissa, and their two children, Karsten (16) and Barrett (15). Annemone is also survived by her brother, Albrecht Kreisel, who lives in Germany, along with many nieces and nephews.

Annemone’s passions were her family, friends, and love for gardening, baking and entertaining. Annemone was a seasoned traveler who enjoyed discovering the beauty and cultures of Europe, Latin America and Asia in her many global travels.

Annemone loved nothing more than to bake a fresh German “torte” to share among friends on her patio, while gazing over the garden she so carefully cultivated and cared for year-round. She was an accomplished baker, making cakes from strawberries, plums and cherries freshly picked in her garden, and her children’s favorite; German black forest cake, which was an art in and of itself. She made jams and sauces; she pickled and canned all with creations she (and Wilfried) carefully grew in their vast garden.

She also spent countless hours scrapbooking for her children and grandchildren, chronicling and capturing lasting memories in painstaking detail and with loving dedication, which will be cherished for decades by her survivors. In her final years, she spent more time with her flowers, and ultimately passed while making sure they were well watered and cared for, a poetic ending for a passionate, lifelong gardener.

Annemone arrived in America after traveling by ship for 10 days from Germany. She came on the invitation of a pen pal, but soon decided to stay, after getting a job as an administrative assistant for a newly formed international marketing team at NCR Corporation. Her fluency in German, English and French, combined with her cultural sensitivity, was of tremendous help to this strategic division dedicated to growing NCR’s international presence. She met her future husband, Wilfried, also from Germany, at a party while living in Dayton. They were married in Germany and then settled in Yellow Springs to start their family. When she became pregnant, as the rules in the ’70s dictated, she was forced to retire from NCR. When the children were older she returned to work part time at Roth Realty. Her final career was spent enjoying the camaraderie and sisterhood of helping Vicki Morgan build the Creative Memories business in the basement of the Morgan home on Glen Street.

While she lived most of her adult life in Yellow Springs, and both she and Wilfried became U.S. citizens in the ’90s, they always celebrated with pride their German heritage and background. While their initial intention was to return to Germany, their love for the U.S. and YS continued to grow and those plans got pushed out indefinitely.

In lieu of a memorial and flowers, please send donations in her name to the Yellow Springs COVID-19 Community Support Fund at YS Federal Credit Union.

One Response to “Annemone Ingrid Keller”