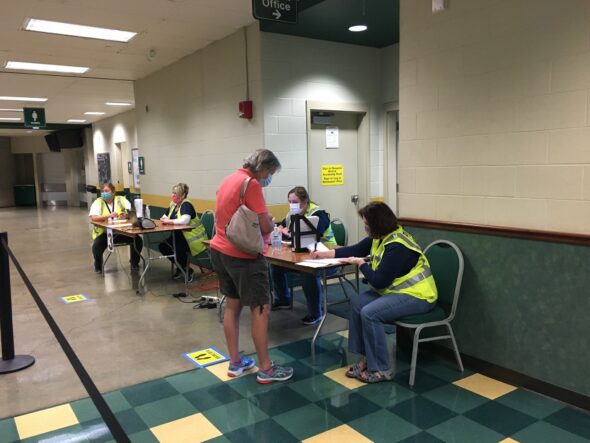 COVID-19 cases are moderating in Greene County after spikes in June and July. Here, a free pop-up testing event took place at Wright State University’s Nutter Center on Aug. 5. According to county health officials, there were 449 valid tests given, nine of which tests yielded a positive result for COVID-19. (Submitted photo)

After a spike in June, and a larger spike in July, COVID-19 cases are moderating in Greene County. Yet with the county at level 2, or “orange,” on Ohio’s color-coded public health advisory system, indicating “increased exposure and spread,” cases are still increasing here at a higher rate than two months ago.

“We still have more than we’d like to see,” epidemiologist Don Brannen of Greene County Public Health, or GCPH, said this week.

He identified Beavercreek Township (Beavercreek), Bath Township (Fairborn) and Xenia Township (Xenia) as the source of most cases in the county — not surprisingly, given that these are the county’s areas of greatest population density.

“It’s amazing,” Brannen said of the village’s success at keeping its infection rate low, despite being a tourist town.

As of Aug. 11, there are 718 cumulative cases in Greene County, out of 102,826 cases across Ohio. Seventy-seven people in the county have been hospitalized over the course of the pandemic, and there have been 12 deaths here.

Prior to the June peak, the county was adding, based on a seven-day moving average, about one case per day, according to data tracked by the News. By mid-June, that average had quadrupled — a jump that Gov. Mike DeWine called “worrisome” in a briefing at that time. A month later, in mid-July, the seven-day moving average spiked to about 15 new cases per day. The county hit a case increase peak on July 16, with 26 cases added that day.

Since then, case increases in the county have moderated. According to News tracking, the seven-day moving average dropped down to about eight in early August, and now stands at a little under 12, partly due to a single-day increase of 22 a few days ago.

Across the county, about one-third of the virus’ spread comes from a person bringing an infection into his or her household. That dynamic was intensified over two summer holiday weekends, the Fourth of July and Memorial Day, leading to the spikes during the weeks that followed, according to Brannen. Such increases have been true of Greene County, Ohio as a whole and many places across the country.

Another significant source of spread within Greene County is out-of-state travel, Brannen said.

“Travel has been a consistent issue for us,” he said.

Summer trips by county residents to locations including Illinois, Michigan and Florida have brought infections here in recent weeks, he said. Keeping on top of travel through contact tracing of individuals who come into contact with someone who has been exposed to the virus out of state has been a priority of GCPH since the start of the pandemic, Brannen said. He also stressed that those who travel out of state, especially to hotspot locations, should self-quarantine for two weeks when they return home.

Much of the virus’ spread within the county is due to community transmission, meaning there is no single, identifiable source of infection, such as a workplace where an outbreak occurs. The role of community spread here has made contact tracing especially important in containing the spread of the virus, Brannen said. Contact tracing seeks to identify and inform those who have come into contact with an infected person. Potentially infected individuals are urged to self-quarantine to avoid infecting others.

The local health district has been diligent about such tracing since the start of the pandemic, according to Brannen.

“We started tracking travelers early on. That helped limit the initial spread,” he said.

With staff such as Brannen working seven days a week since February, GCPH has conducted over 1,300 contact tracing investigations since the start of the pandemic. There are 143 active investigations currently, including a couple in Yellow Springs.

Robust contact tracing, with high overall participation by residents, has been one factor in keeping COVID-19 rates lower in Greene County than surrounding areas. Brannen noted that only a few individuals have refused to participate in contact tracing investigations, all of them affiliated with several local churches. But other church groups have been supportive of the county’s efforts, he added.

“It’s a humbling experience,” he said. “It’s amazing to see people’s efforts to keep themselves, their loved ones and their neighbors safe.”

Testing also plays a role in dampening the spread of the illness, Brannen said, by allowing people with and without symptoms to know they’re sick and self-isolate accordingly. There have been two free pop-up testing events in Greene County. The more recent one occurred at the Wright State University’s Nutter Center, where there were 449 valid tests given on Aug. 5, according to Health Commissioner Melissa Howell. Nine tests yielded a positive result, for an overall “positivity rate” of 2%.

If that rate pertains to the rest of the county, then Greene County is below the World Health Organization’s threshold of 5% positivity, meaning that the testing rate is adequate in the county to uncover and contain the virus. Ohio as a whole is at 5% positivity, according to recent state data.

Yet there’s also reason to believe that far more cases exist than are being surfaced by tests, according to Brannen. He cited the U.S. Centers for Disease Control estimate in late June that actual infections are 10 times the number of reported cases, which would mean that Greene County has a true case rate of well over 7,000.

The tests administered at the Nutter Center were PCR tests, a highly sensitive and specific test that represents the majority of COVID-19 tests taken in the county and state. By contrast, a quicker-turnaround test called an antigen test has a greater margin of error — as was seen in dramatic fashion last Thursday, when Gov. Mike DeWine tested positive based on an antigen test manufactured by a company called Quidel, then negative on several subsequent PCR tests. The PCR tests are considered definitive. Ohio recently entered into an interstate compact to purchase Quidel antigen tests in mass quantities to boost rapid testing in the state.

Regarding the governor’s episode, Dr. Stuart “Skip” Leeds, a physician and scientist at Wright State University who lives in Yellow Springs, contended that the antigen test shouldn’t yield a false positive, only a false negative, if the test is as selective as it’s been advertised as being. In his view, the test result was read or reported inaccurately, or the test itself is less selective than the manufacturer indicates.

Another factor in keeping cases lower in Greene County than many other Ohio counties is the relative lack of infection in area nursing homes and other long-term care facilities. Elsewhere in the state and across the country, such sites are a major source of outbreak and fatality. In Greene County, there have been a smattering of cases at most of the county’s 21 facilities, with 14 resident cases and 19 staff cases overall. And so far there have been no deaths from COVID-19 at a Greene County nursing home.

Brannen noted that infection occurs because of some combination of three variables: virus concentration, frequency of exposure and a person’s underlying susceptibility. All these variables are operative in nursing homes, especially underlying susceptibility. Yet a coordinated approach by the local health district to communicate regularly with nursing homes and provide mass testing and contact tracing support has paid off, according to Brannen.

But the relatively low number of cases in nursing homes cuts both ways in terms of state indicators. Greene County has been at level 2/orange for four of the past five weeks, since the state’s risk framework was introduced on July 2, and that’s partly because of the number of cases the county has not seen in congregate settings. The indicator related to cases in congregate settings is flagged if 50% or more of cases occur outside these settings in any one of three weeks. With low congregate cases, that’s tended to be true of Greene County.

By contrast, Clark County also had 90 new cases over the past two weeks, but with a lower population, that county’s per capita rate is 67.12.

Greene County could fall below that indicator’s threshold over the next couple of weeks, as its rate of infection is dropping, according to Brannen.

He cited a current R0, or reproduction rate, value of 0.69, which means that each infected person transmits the virus to fewer than one other individual. An R0 below 1 is highly desirable, as it means the spread of a virus is losing, rather than gaining, steam.

Over the course of the pandemic, the local R0 value has fluctuated widely, from as low as 0.4 to 5. According to Brannen, the current R0 value is partly the result of the state’s mask mandate, which went into effect on July 23.

“The mask mandate has helped,” he said.

Studies show that widespread use of facial coverings brings the R0 value down to between 1 and 1.4, a significant dampening of the virus’ spread. Brannen noted that it’s been especially significant to see pervasive masking in big box stores, indicating that the practice has been normalized. Some people are still flouting the mandate, but most county residents seem to be masking up, he said.

Brannen emphasized the importance of good mask hygiene, which includes having multiple masks to wear on rotation, and wearing cloth masks just three to five times before washing. Masks can also “rest” for three days in a paper bag to let any accumulated virus die off.

Mask wearing, social distancing and proper handwashing remain the keys to prevent the spread of the virus and keep one’s personal risk low, he emphasized.

‘It’s not going away’

People can’t let up just because the numbers are “better,” he said — a point also emphasized by Leeds.

Leeds offered the analogy of a person dieting and exercising for a couple of months, then stopping once health gains become evident. The response to improvement can’t be an abandonment of what led to improvement in the first place, he pointed out.

“It’s not going away. The response to doing the right things should not be to do the wrong things,” he said.

Leeds is especially passionate about the risks posed by mass gatherings. He said his new mantra for the pandemic is, “There is no such thing as a safe indoor mass gathering.” That includes schools, concerts, bars and any other event or activity that brings a group of people together indoors, breathing the same air and spewing respiratory droplets.

Despite Greene County’s relative success at containing the virus so far, one factor stands out to Leeds as problematic — the imminent return to in-person school, which is happening at a majority of public and private schools across the county.

At an Aug. 11 press briefing focused on schools and COVID-19, Gov. DeWine emphasized the need to keep students safe with online learning, hybrid learning models, staggered openings and, for schools returning to in-person instruction, masks, social distancing and cleaning protocols. But DeWine also acknowledged the inevitable link between schools and their communities.

“Whatever is going on in their communities will be reflected in their schools,” Gov. DeWine cautioned.

That link is reciprocal, with infections from schools spreading into the surrounding community, Leeds pointed out.

Add to that the change in seasons, which according to Brannen, brings greater risks because of cooler weather conditions allowing the virus to hang around longer, and people spending more time inside.

“We can anticipate having a lot more cases,” he said.

As summer shades into fall, the pandemic, local experts agree, is far from over.