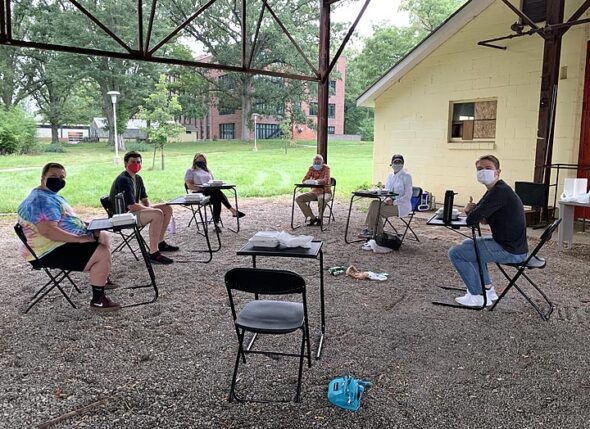 Most Antioch students are back on campus for the fall quarter. Under new safety guidelines, classes and gatherings are being held outside or indoors with masks and social distancing. Here, bio-medical students Benjamin Timmester, Noah Greer, Austin Korner and Maya Ziegler met with Antioch alum Dr. Don Schoch and his partner, Dr. Catherine Kylie, in early September to discuss co-op opportunities. (Submitted photo by Beth Bridgeman)

Antioch College— Back to campus under COVID-19

Antioch College vice president and history professor Kevin McGruder is teaching a class called Dialogues Across Difference this quarter. First-year students are learning to listen and communicate more skillfully across racial, ethnic and other lines of difference, he explained.

And they’re doing it at six feet from one another, and wearing masks.

“It’s somewhat of a barrier,” he conceded.

Despite the masks and physical distance — necessary precautions in the COVID-19 era — the class is going well, he added.

The same could be said of the fall quarter as a whole, according to college leaders in recent interviews.

Since announcing in June a return to residential learning for the fall term, Antioch has been finalizing its reopening plans, which now have been rolled out with few hitches.

Significantly, the college has not reported any cases of COVID-19 among students or employees since students began moving into dorms on a staggered schedule in late August. One round of mass testing was completed prior to move-in, and another round is underway this week.

The college has enrolled 116 students this fall, 81 of whom are living on campus.

After this week’s mass testing, the college will begin randomly testing a percentage of students weekly, following Gov. Mike DeWine’s latest guidance. While the governor has called for 3% of students at colleges and universities to be tested, Antioch plans to test more than that percentage, given its small student body, Cooper said.

Cooper co-chaired the college’s reopening task force, which worked through the summer to prepare the campus for new and returning students. Health and safety protocols, a testing strategy, housing and dining approaches, classroom layouts and more were discussed in detail by the group.

Preparations for safely reopening have been funded by federal, state and local grants, including funds from the CARES Act and a higher education grant called FIPSE, college officials said.

One centerpiece of the reopening plan is a community agreement that calls on the campus community to observe health and safety guidelines as part of a mutually protective “culture of care.” Students, staff and faculty were required to sign the agreement before returning to campus, according to Cooper.

“The agreement follows from our commitment to a community perspective,” she said.

Those who violate campus health and safety guidelines, which include mandated mask-wearing and social distancing, face penalties. First-time violators are given written warnings, with escalating penalties for repeat offenses leading, eventually, to a possible ban from campus.

The college has had “multiple reports” of students not wearing masks, but penalties haven’t been elevated beyond warnings, according to Cooper.

Regarding the decision to reopen the campus, college leaders weighed a range of factors, including safety, logistics, student preferences and the course of the pandemic. Safety was number one, according to Cooper.

“Safety was the bottom line, not finances,” she said.

In common with most area colleges and universities, Antioch stuck to its decision to reopen despite the surge in COVID-19 cases in Greene County and Ohio over the summer.

Cooper said the college watched the numbers, but continued to believe that reopening could be done safely.

“There was ongoing discussion, including revisiting the issue, but ultimately as we moved throughout the summer, the board thought we made the best decision as a college,” she wrote in a follow-up email.

College trustees made the decision with input from leaders across the college.

One factor that weighed in favor of a safe return to campus was the small size of the student body, she said. The college had the luxury — in this case — of more dorm rooms than students, allowing for all students to have their own single room and one unused dorm, West Hall, to be designated as a quarantine space.

“Our size was a benefit for us in this scenario,” Cooper said.

Residential living is a core aspect of Antioch, and the clear preference of new and returning students, according to college leaders.

Students surveyed last spring indicated they strongly preferred to return to campus rather than continue in the remote learning format the college pivoted to, by necessity, during the start of the pandemic last spring.

“A fair amount did not like the online solution,” McGruder said. Faculty shared a preference for in-person classes, he added.

Incoming students likewise expressed a preference for coming to campus rather than learning from home, according to McGruder.

Under the college’s self-described “flexible educational model,” new and returning students this fall can engage in remote or in-person learning, and have the option of living on campus.

Most have chosen to do so. Out of the college’s total fall enrollment of 116 students, 81 are living and learning on campus, or about 70%.

About half of fall classes are being offered in person, while a quarter are wholly online and another quarter are “hybrid” classes, or a blend of in-person and online. Class format was left up to faculty, who made decisions based on course content, health risks and other factors, according to McGruder.

Co-op opportunities have opened up again after a spate of cancellations in the spring, according to cooperative education dean Richard Kraince. Travel restrictions are still a barrier to international co-op opportunities, however.

He described one student whose “dream co-op” to an archaeological site in Scotland was canceled last spring. “We’re still hoping we can get her over there,” he said.

On campus, amenities are somewhat limited. The Antioch kitchen is open, though the dining hall is closed. Students have the option of dining outside or in their rooms. Weston Hall, home to the student union, is closed for the present, but may reopen in some form. And the Wellness Center remains closed to students and the community. College leaders have cited health and safety reasons, although budget issues are also a factor, according to President Tom Manley last spring.

Residence life staff have planned bonfires, movies, jam sessions on the lawn and nighttime flashlight tag to give students socially distanced ways to interact and relax.

But everyone on campus is aware of the strangeness of the situation, with COVID-19 heightening other social and political issues of concern to students.

One bright spot of the fall quarter is the new class, which is the largest incoming class Antioch has seen since 2015. The college enrolled 50 students from the class of 2024 this fall, with 46 living on campus.

And he noted that some new students have gotten rapidly involved in campus life, despite the barriers of newness and COVID-related limitations.

“First-years are running for a range of positions. They’re getting involved in the operations of the college early,” Louima said.

This fall’s class is the first recruited under the college’s new Antioch College Works program, which offers free tuition to lower-income students eligible for federal Pell grants, and provides all students with opportunities for part-time campus jobs, international learning experiences (when these become feasible again) and post-graduation job support.

Among new students, 78% are benefiting from free tuition under the program, slightly more than the student body as a whole, Louima said.

The program was a factor in the success of Antioch’s most recent recruitment effort after years of missing enrollment targets, Louima believes.

What role COVID-19 might have played in the size of the new class remains to be understood.

The pandemic was likely a factor in the geographical concentration of the new class, he speculated. Sixty percent of new students are from Ohio, with the remaining 40% from 12 other states and districts. That’s the inverse of a more typical year, Louima said.

A closer look at the experiences of new and returning students will appear in a future issue of the News.