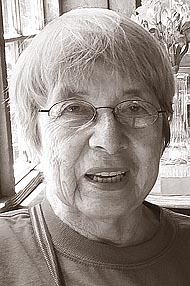 Dr. Esther Hetzler, a longtime resident of Yellow Springs, passed peacefully into her long sleep on Sept. 30, 2020, at the age of 92. She was at home at the time of her passing with her son, Lance.

Yellow Springs had been home for Esther since 1965, when she married Dr. Stanley Hetzler, who passed away in 2000. After Stanley died, Esther spent winters in Austin, Texas, sharing a home there with her son, Lance, until 2013, when she remained in Yellow Springs year-round.

Esther was an active member of the Unitarian Universalist Fellowship in Yellow Springs, through which she maintained numerous friendships, many of which were with people who shared similar interests with Esther.

One of Esther’s passions was gardening — she had many plants and flowers and possessed not only a green thumb, but an impressive botanical knowledge about a wide variety of plants. For many years, she volunteered at the Cox Arboretum in Dayton, where she worked with a group of ladies calling themselves the Shady Ladies — because they worked with shade-loving plants. During her winters in Texas, she also volunteered at the Lady Bird Johnson Wildflower Center in Austin, but she always said she preferred the flowers of Ohio.

Scrabble was another of Esther’s passions; she played regularly with friends, whether she was in Yellow Springs or Austin. She had a small table in her living room, where she always had a Scrabble set open and would play games with herself when no one was around to play with her.

Among her other loves, Esther loved cats and collecting “little blue objects,” like little blue bottles, vases and a collection of blue violets; and she never missed her afternoon tea and cookies.

Esther was born in Chichicastenango, Guatemala, on Dec. 11, 1927, of missionary parents, the Rev. Harry Granger, of Philadelphia, and Raquel Lopez Granger, of Guatemala. Her parents sent her as a teenager to live with relatives in Philadelphia for her high school education, since education was a difficult matter in Guatemala at the time. After high school, Esther earned her undergraduate degree in biology from Otterbein, then went on to study at Johns Hopkins, where she received a nursing degree in the mid-1950s. Later, she received a Ph.D. in Spanish literature from the University of Colorado in Boulder, specializing in Latin American literature.

During her lifetime, Esther held interesting and varied jobs. In her younger years, she worked with migrant workers, picking cherries in the Midwest, and was a nurse for a number of years. After receiving her Ph.D. in the 1960s, she taught Spanish and Spanish literature at Alter High School in Dayton and at Antioch in Yellow Springs. She also organized botanical tours to Costa Rica. She and her husband, Stan, also took students to study abroad in Europe.

Due to COVID-19, there is no public service planned. She will be interred next to her husband, Dr. Stanley Hetzler, in Jamestown, Ohio. She will be sorely missed by her family and friends.

One Response to “Esther Hetzler”