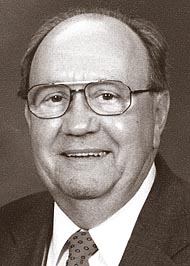 Cherished husband of 69 years and 88-year friend to Nita Lee Smith Wilson, James was preceded in death by their beloved son, Michael Alan Wilson, whose battle with pancreatic cancer and subsequent death at the age of 42 taught us to appreciate the limited time we have together. James was also preceded in death by his mother, Helen McKay Pavey, and his fathers, Homer Charles Wilson and Carl Nelson Snyder.

Better known as Jim, Jimmy, Grandpa and Papa, James was the cornerstone of his adoring family — father to Mike, Diane and Chris; grandfather of Julie, Melissa, Valerie, Lisa, Tyler, Katy, Michael and Nathan; brother of Karen; great-grandfather of seven — and was beloved by all who were fortunate enough to spend time in his company. He was a funny, kind, generous, deeply intelligent and relentlessly inquisitive soul. His love of a good joke was well known to all who met him. His gentle nature and kindness were ever-present, even when faced with his own death. His curiosity about the world around him inspired his children, grandchildren and great-grandchildren to forge their own unique paths in the world. His creativity and compassion encouraged those around him to see the world differently and to accept differences in others. His life stands as an example that the humble journey of one man — a journey deeply rooted in the values of honesty, humility, integrity and kindness — can have an immeasurable, positive impact on the generations that follow.

Jim was born in Sabina, Ohio, to Carl Nelson Snyder and Helen McKay Pavey on Sept. 19, 1932. After his father’s tragic death when Jim was just 4 years old, Helen remarried Homer Charles Wilson a few years later. Homer formally adopted Jim at the age of 9, and little Jimmy Snyder would thereafter be known as Jimmy Wilson. He married Nita Lee Smith on Sept. 16, 1951, in Sabina, Ohio. Their plan was to settle down and farm the fertile soil of southwestern Ohio just as multiple generations of their ancestors had done, but tragedy struck the young married couple when they were just 19 years old: Jim contracted polio and was incapacitated. After months of grueling treatments at Children’s Hospital in Columbus, followed by more than a year of physical therapy at home, he began to recover. However, his once muscular body was no longer ready for the physical demands of farming. So, when a family friend offered him a chance to work in the insurance industry, while using his in-depth knowledge of farming, he seized the opportunity. This new direction — coupled with Jim’s tenacity and his ability to learn and adapt quickly — led to a lifetime of growth and achievement in the insurance industry, and laid the foundation for his family to grow and thrive. He and Nita eventually moved to Springfield, Ohio, where they would spend the next 57 years working hard, raising their family, creating laughter with friends and family over home-cooked meals and engaging in community service. In the midst of that active life, they made time to share stories and songs around hundreds of campfires at John Bryan State Park in Yellow Springs, Ohio, and across the country. Jim and Nita retired to Florida in 2017, but not before traveling the world extensively as they shared their passion for curiosity and exploration.

A memorial service will be announced at a later date.

In lieu of flowers or other gifts, the family encourages donations in the name of James Pavey Wilson to the Glen Helen Association, 405 Corry St., Yellow Springs, OH 45387 or http://www.glenhelen.org/donate.