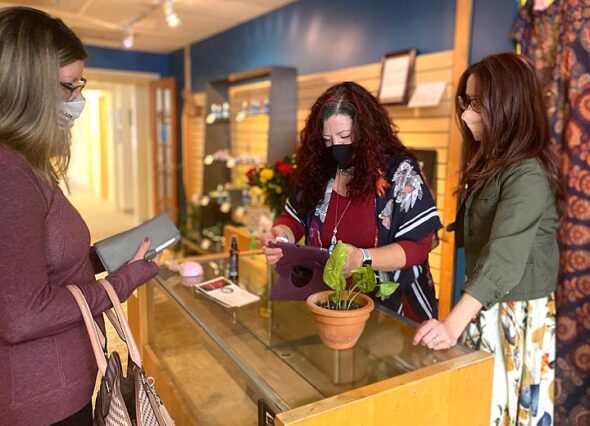 Heidi Quigley, center, and Jessica Holihan, right, spoke recently with a potential customer behind the desk of their new salon and massage parlor, H&H Studios, which opened in late October at 100 Corry St. (Submitted photo)

H&H Studios is here for hair and body

Jessica Holihan and Heidi Quigley laughed on screen as they got settled for a video interview with the News last week; when the call started, Holihan popped on her face mask — then quickly whipped it back off.

“Oops — forgot I didn’t need a mask!” she said, prompting laughter from both women.

Holihan and Quigley held the grand opening for their new hair salon and massage parlor, H&H Studios — so named for “Heidi” and “Holihan” — on Oct. 24. Holihan’s knee-jerk mask reaction can probably be chalked up to the pair’s adherence to COVID-19 safety protocols since opening: only one or two hair and massage customers at a time, no sitting in the waiting room, thorough sanitizing between customers and masks for everyone.

“It’s a whole process,” Quigley said. “We’ll open the doors for people when they come in, and they think we’re being nice — that’s part of it — but we also don’t want them touching the door handles!”

Concern over COVID-19 was part of the reason the duo decided to open their joint venture at 100 Corry St. Holihan, who has practiced massage in the village for two years, wanted to open back up after months of closure due to the pandemic.

“But I wanted to move the studio out of my house to be safe,” she said.

Likewise, Quigley had been working as an independent stylist in a salon in Springfield — but she said she “wasn’t feeling very safe” in that particular environment. Quigley had also previously worked for two years at Wavelength Aveda Salon and Spa, which operated for nearly 30 years in the space where H&H Studios now resides.

“I just thought, ‘I gotta get back down to Yellow Springs,’” she said.

Holihan said she’d been looking for a space in town for about a month when she found the listing for their new space while scrolling through YS News classifieds online.

“It was about 9 at night and I saw the listing and just made the call on impulse,” Holihan said. “I didn’t expect the realtor to pick up — but she did, and I was a little embarrassed because it was so late!”

Embarrassment aside, Holihan and Quigley snapped up the new location and made plans to renovate the large, open space to include two new features: first, an enclosed massage room for Holihan, and second, a bathroom.

“There used to be only one bathroom in the whole building for all of the shops that are in this strip,” Quigley said.

“Anything we could do ourselves, we did it,” Quigley said. “Let’s just say that [Holihan] is a really good painter — now,” she added, with both women laughing. 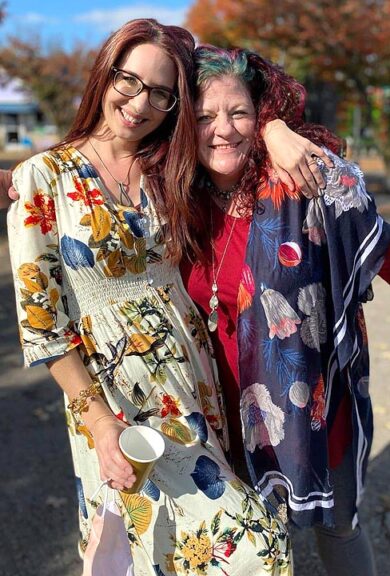 H&H Studios owners Jessica Holihan, left, and Heidi Quigley posed for a photo outside their new business on the day of its grand opening. The new business, located at 100 Corry St., is a salon and massage parlor. (Submitted photo)

The business partners share an easy camaraderie — one that makes itself apparent during the course of the interview as they joke and weave their shared narrative together.

“We met through mutual friends — I’m sure there’s a more legit story, but I don’t remember it,” Holihan said, laughing.

Quigley jumped in: “You know there’s 13 years between Jess and me, and I just thought she was kind of old soul-ish,” she said. “And we’re both a little bit independent, we’re strong women types — it just seemed like we could get along and do some good stuff together.”

Quigley said she came to her career through other avenues, beginning at Ohio University, where she studied both journalism and theater. It was her theater study that got her started doing hair and makeup for shows, both in college and on the road with professional theater troupes. She parlayed that experience into a job as an educator with Matrix, a professional hair care and salon services company. The work included traveling and presenting on-stage demonstrations — as well as experimentation with some untraditional hair techniques.

“One time we lit a girl’s hair on fire on stage just because it looked cool — if that tells you anything,” she said.

Quigley had a few other jobs over her lifetime, including freelance writing and working in a career center for students, before finally following her calling as an independent stylist.

“I really love that what I do hopefully makes people feel better about themselves, whether inside or out — it’s a great job to have,” she said.

Holihan said her connection to massage began at home; her father has had a number of back surgeries over the years, and Holihan would occasionally rub his back to alleviate stress and pain. Soon, her friends began asking her for massages, sometimes trading bottles of wine for her time.

“I had no clue what I was doing, really — but I knew I enjoyed it,” she said.

During this time, Holihan worked for an apartment complex in Fairborn.

“And I thought to myself: ‘Is this what I want to be doing for the rest of my life?’ I dug down deep, and realized that massage is what I love doing — it’s my heartsong,” she said.

Holihan studied medical massage in Dayton and received her license in 2018; in fall of that year, she and her now-husband moved to the village and she began practicing professionally in her home.

“Massage is sort of a personal meditation for me — like a serene space where I am able to really be there for someone else,” she said.

Quigley said that, in contrast to Holihan’s tranquility, her own personality is more ebullient, and her work can sometimes be “a little more chaotic.”

“It’s nice to have her calming atmosphere in the place, especially right now when people are feeling anxious about the world,” she said. “She brings the chaos down for me and I amp her up when she needs it.”

Opening a new business comes with its share of stresses and anxieties — even more so during a pandemic — but H&H Studios is taking things slowly. Holihan said this allows the co-owners to focus on both attentiveness with their clients and COVID precaution, easing some of their anxiety.

“It’s kind of nice to be able to slow down and integrate the protocols and get ourselves set up — we’re not hurting,” she said.

Quigley added: “I had to learn to live on a lot less when I wasn’t working during the pandemic, so I think we can do this.”

Both women are enjoying the new space; during the video interview, Holihan ferried her phone around the shop for a virtual tour. A column of festive balloons rested around the corner from Quigley’s work space, which features a bright purple salon chair. A large rack held an array of argan- and hemp-based hair products from the Marrakesh company. A door opened into the soft-lit massage room. Holihan also showed off an elaborate wooden counter where Quigley does color mixing, and where Holihan hopes to be able to formulate tinctures, bath salts and teas once she obtains her apothecary’s license.

“I’ve been working toward the license over the last six months while I’ve been off work, and I really look forward to creating things and blessing them with my energy to give to people,” she said.

The pair brought the video tour into their still-in-process hydrotherapy room, which features a large tub with massaging jets. A horizontal bar of showerheads hangs from the ceiling in what will become a Vichy shower, where clients will lie on a sort of drainable massage table underneath the running showerheads.

“That’s our next project: to get all of this working,” Holihan said.

The pair have other dreams for the business down the road, many of which are focused on the indeterminate time when the pandemic is no longer a threat.

“We’d love to do mother/daughter parties or parties for dads and their kids, where they can learn to do hair and just have fun — but that depends on COVID,” Quigley said. “We want this place to be about self-care — a retreat type of place.”

For the foreseeable future, however, the two are focused on what they’re able to give right now.

“It’s all in our motto,” Quigley said. “‘Healing hands and healthy hair.’”