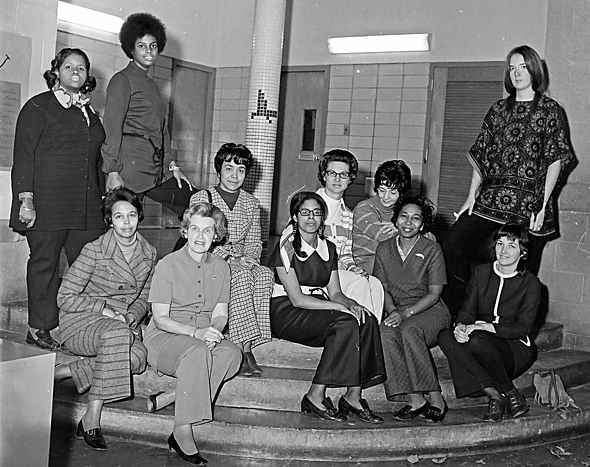 In Dec. 1970, Mills Lawn School teachers showed off their “new look,” which the News reported erupted after Mills Lawn Principal Dan Smith’s directive that “pant-suits are fashionable.” Seated, left to right, are Betty Felder, Edla Dixon, Alice Flowers, Westy Ligon, Nancy Welch, teacher aide Joyce Forbes, Therese Greene and Joyce Rupert. Standing are student teachers Krishmu Stripmon, Gwendolyn Renshaw and Cathy Jordan.
On the occasion, News columnist Pat Matthews penned a column on “the advantages of pant suits.” “No one can say that Yellow Springs teachers aren’t with it as far as keeping up with the styles,” she wrote. Among the advantages, pant suits are good-looking, attractive and neat-looking; no slips or stocking runs show, any size of heels pair well and teachers “can sit on the floor feeling perfectly comfortable,” Matthews wrote.

“Nipper’s Day. Dec. 23 has been officially declared ‘Dennis Nipper Day’ in Yellow Springs, to honor the longtime Yellow Springs police officer who retires this month from full-time service after 38 years.”

“Baldwin buys Kings Yard. The sale of the long building of shops in Kings Yard that was auctioned off in April was finalized last week by the purchaser, Bob Baldwin. While local resident Dave Chappelle won the bid on the property in April, he never closed the contract … and Baldwin agreed to buy the property … for $440,000.”

When did deer become backyard-normal? Letter to the editor: “We’ve enjoyed deer roaming through our large yard for almost a year now. They first appeared last February, grazing outside our picture window. … The most memorable deer visit was when three of us were sitting out in the yard and a very young deer stopped to graze and gaze. Harold began talking to it, and the little fellow responded with a wiggle of his white tail and a shift of his feet like a shy schoolboy. —Jean Putnam” [That was 1995. I recall first seeing deer in the Glen/School Forest in 1985.] 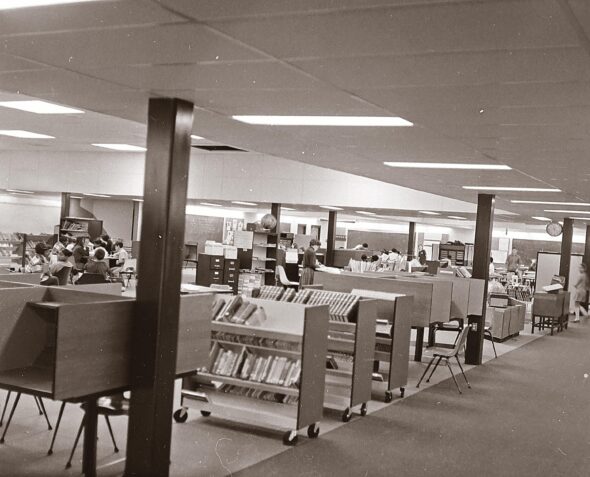 Arthur Morgan Middle School resources center (library), open all along two sides to the classroom areas (“learning centers” — one can be seen in the rear) has a central position in the new building. The school was dedicated in Dec. 1970 and closed in 1988.

“Bulldogs Beat Northeastern, Tecumseh to Earn 7–1 Record. Yellow Springs High School’s basketball team won a pair of games the past week and completed its pre-Christmas schedule with a seven games won, one lost record. … Steve Harshaw, Yellow Springs’ highest scorer last year and this, had his biggest production of the season — 26 points [against Northeastern]”

Morgan Middle School Dedicated. “The Arthur E. Morgan Middle School, named for Yellow Springs’ internationally known educator, engineer and champion of the small community, will be dedicated Sunday. The building, built with bond issue funds approved by voters in 1968 ($585,000) and 1969 ($125,000) stands on the district’s ‘campus’ site on East Enon Road. … Future building plans call for eventual locating of a new elementary school on the same site, somewhere southwest of the High School.”

“Crackdown on Speeding in New 35 mi. Zone. Twenty-two speeders, many of whom were caught by the Vascar (an electronic speed timer) in the new 35 mph zone on Rt. 68 south, were the main business in Mayor James Lawson’s court.”

“Sale of 950 feet of beachfront property at Fort Lauderdale, Florida, for a net of about $700,000 [for Antioch College] was announced by Homer C. Corry, executor of the Hugh Taylor Birch estate. … A $500,000 endowment left by the philanthropist as permanent endowment for Glen Helen has already been received.” [Birch purchased his entire Florida property of some 300 acres in the 1890s for $500.]

“Burglars blew the safe of the DeWine Milling Co. at the Old Town Mill, Tuesday night, but got only $5 for their reward. Glycerine was used but no one heard it and it was not discovered until the men went to work Wednesday morning.”

“The Community Club social and spelling bee will be held … at the opera house. You are required to either wear your clothes backward or come in backward or pay a fine.”

“Sheriff Funderburg issued an order last week that all slot machines and punch boards must go out of business. This is a county-wide order and a good one. The sheriff is to be commended for his stand in this matter as both are gambling devices and are very harmful especially to the young people.”

2 Responses to “News from the Past”