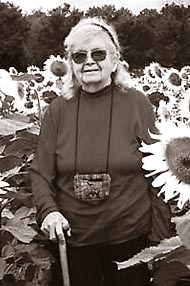 Ann Handforth McLellan, the beloved matriarch of the McLellan family of Yellow Springs, died at home on Jan. 6, 2021. She was 95.

A woman of great optimism and wit, Ann instilled in her four children a deep love of learning, determination to contribute to society and a knack for witty quips.

Ann was born in Nutley, N.J., on March 14, 1925, the fourth of six children of Jessie and Hunter Handforth. She grew up in a house designed by her father, out in the country near Croton-on-Hudson, N.Y.

She excelled in school and was awarded several college scholarships. But she left St. Lawrence College during her sophomore year to join her high school sweetheart, David Stanley McLellan, in Clovis, N.M. They were married there shortly before the U.S. Army Air Force sent David to the Pacific theater as a B29 navigator during World War II.

After the war, Ann and David bicycled all over Europe, then lived in Grenoble, France, for several years. Later, when the family, now with four children, lived in California, Ann encouraged her college professor husband to apply for an academic post abroad in the 1960s. The family returned to France to live in Bordeaux for two years. At Ann’s urging, the family traveled all over Europe, including to the Soviet Union. Returning from that trip, the family found itself in Prague during the Prague Spring revolt.

Ann managed their lively household in Riverside, Calif., as well as organizing the family for long-term research and teaching stays in Berkeley, Washington, D.C., France, England and Italy. She also found time to read and type David’s book manuscripts. She completed her undergraduate degree at the University of California Riverside and later studied Italian.

Ann came from a family of artists, loved the arts, and found satisfaction working in marquetry and watercolors.

She was politically active. She and David supported the civil rights movement and opened their home for fundraising events. While in California, the family boycotted grapes and lettuce for a time in support of farmworkers. She served as Democratic Party Precinct Captain in Riverside and as a loyal poll worker. Later, after the family moved to Oxford, Ohio, in 1970, she was an organizer and prolific letter writer on behalf of Amnesty International.

Ann and David took great pleasure in their grandchildren. Ann overcame her fear of flying to spend time with new grandbabies in Minnesota, provided a midweek refuge to one child who attended private school, and drove long distances to attend sporting events and chauffeur grandchildren. Family came together each year at the summer home they built for themselves on Prince Edward Island in Canada.

In 2002, Ann and David moved to Yellow Springs, where she made many friends, helped at her daughter-in-law’s bookshop, The Epic, and cared for her youngest grandchild, Hypatia McLellan Lichtenfels. Hypatia says, “I like to think that I inherited my spunky and sassy personality from my grandmother, as we were alike in so many ways.”

Ann devoted many years to caring for her husband, who suffered from Alzheimer’s disease and died in 2010. She lived with her daughter, Marjorie McLellan, and son-in-law, Gary Greenberg, in Yellow Springs for the past seven years.

In addition to Marjorie, Gary and Hypatia, Ann is survived by her son, Eric, and daughter, Michele, also of Yellow Springs; sisters, Jane Kester, of Springville, N.Y., and Alice Grow, of Arvada, Colo.; as well as two other grandchildren, Cara Greenberg, of Columbus, and Jesse Greenberg, of San Francisco; and five great-grandchildren. Her oldest daughter, Hilary, passed in 2009.

Donations in memory of Ann H. McLellan may be made to the Dayton Foodbank at thefoodbankdayton.org/donate.