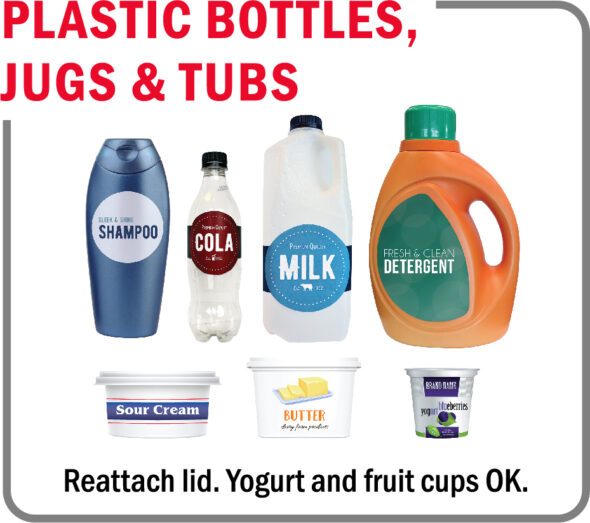 Rumpke will now accept some #5 plastics — in the form of tubs and fruit and yogurt cups — for recycling.

Beginning this month, villagers can divert a few more items away from their trash cans: Rumpke Waste and Recycling recently announced that it would accept new plastic items for recycling.

Along with the previously accepted plastic items like bottles and jugs, Yellow Springs residents can now fill their recycling bins with fruit and yogurt cups and butter, sour cream, cottage cheese and whipped topping tubs.

Whereas the plastics Rumpke usually accepted for recycling tended to be #1 PETE or #2 HDPE — that is, polyethylene terephthalate or high-density polyethylene — the newly accepted items are all #5 PP, or polypropylene, plastics. Polypropylene has long been passed over for collection by many residential recycling programs across the country, due in part to the expense of recycling the material compared to producing it from scratch.

Locally, in 2019, villager Vickie Hennessy organized and implemented the pickup of #5 plastics around the village, which she then transported to a collection site at Whole Foods in Dayton. In April of 2020, Hennessy announced that she would be suspending pickup due to the ongoing coronavirus pandemic, and later announced that Whole Foods had suspended its collection as well.

“To my knowledge, [the Whole Foods cancellation] is a temporary situation that may change as conditions improve,” she wrote in a letter published in the News. “I am suggesting that you hang onto your recyclables — if you have space — in the hopes that I can once again set up our village #5 plastic recycling efforts.”

Until then, villagers can get rid of some of their plastic stores right away. According to a press release, Rumpke has secured contracts with regional companies that plan to convert the material from the newly accepted items into new containers; the release stated that 95% of Rumpke’s recyclables end up being used domestically, with the majority of those circulating in Ohio or the greater Midwest area.

“There has been a lot of recent innovation in plastic recycling that is allowing for this expansion of our acceptable items list,” said Steve Sargent, Rumpke’s director of recycling.

To accommodate the new items, Rumpke has installed additional recycling equipment that will sort the new materials. The installation was aided in part by a grant from the Polypropylene Recycling Coalition, one of four such grants awarded to materials recovery facilities across the country. The coalition was founded in August of 2020 and is spearheaded by corporations Keurig, Dr. Pepper, Braskem and Walmart. The coalition operates under The Recycling Partnership, a nonprofit organization that, according to its website, is “a leading, national force for improving recycling [that] puts private dollars to work in communities.”

“Through the Polypropylene Recycling Coalition, we are rapidly driving meaningful, measurable change by awarding grants to Materials Recovery Facilities (MRFs) that will improve and increase the capture of polypropylene,” said Sarah Dearman, vice president of Circular Ventures, The Recycling Partnership.

Villagers should note that, although the new items being accepted are #5 plastics, not all #5 plastics will be accepted by Rumpke. Just as the company only accepts #1 and #2 plastics in bottle or jug form, #5 plastics like medication containers and takeout containers, for example, will not be accepted.

The updated list of recyclable items is as follows:

All items should be clean, empty and placed loose and unbagged in recycling containers in order to ensure that they can be properly sorted and recycled.