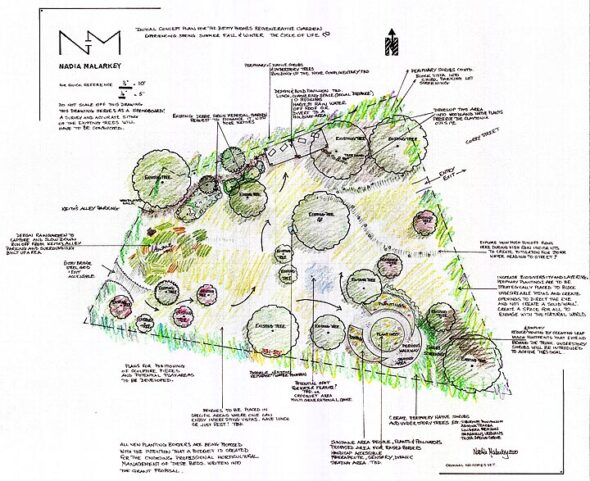 Local garden designer Nadia Malarkey prepared a concept for the Village last year for improvements at Beatty Hughes Park. The design shows, at top, a pavilion with seating underneath, at bottom right, an accessible “Sunshine Area” with therapeutic plantings, entrances from Kieth’s Alley (left) and Corry Street (right), a rain garden near Kieth’s Alley to handle runoff, and other features. The Village is looking to invest $30,000 in the park to make it more accessible and viable for larger community events such as concerts and outdoor films. (Submitted concept by Nadia Malarkey)

Village Council— A plan for the ‘Little Park’

A downtown park is getting a makeover.

The park’s central location and proximity to both downtown and the bike path make it an important space for village life, Salmerón said. Yet it remains underused, he believes.

“There is significant interest to see Beatty Hughes park play a more central role in the physical, social and community life of Yellow Springs,” he said.

Salmerón said a revived Beatty Hughes could also play an important role as the community recovers from the coronavirus pandemic, which has limited local social activities.

“What we’re struggling to reconcile is that it’s about being together, breaking bread together. Beatty Hughes can help us recover from that, and improve on that,” he said. “Our community is about getting together.”

The Village is supported in its effort by Inclusive and Resilient Yellow Springs, a new collaborative group working to upgrade amenities and foster opportunities for seniors, low-income residents and villagers of color.

Toward that end, the Village is looking at “therapeutic gardens” to evoke a sense of calm, universal design for accessibility and other features that promote intergenerational and “plant/people” interactions, according to Salmerón.

The plan would be implemented over two to three years using money in the Parks and Recreation Capital Fund that has already been budgeted. According to Salmerón, that money is due to be spent starting in 2022, and now Village leaders are “fine-tuning it.”

Salmerón added at the meeting that the investments in Beatty Hughes come after several years of improvements focused at the Bryan Center skate park and Ellis Pond, north of the village limits on Polecat Road, which was once a municipal well field.

Those expenses were needed because of potential Village “liabilities,” Salmerón explained, especially an aging spillway at Ellis Pond that required a new bridge, and derelict wooden stairs and ramps at the skate park that have since been replaced with concrete.

“Beatty Hughes is often neglected when you think about how much money we put into Ellis Pond,” Salmerón said.

“If you’ve seen some of the vehicles parked there and some of the chemicals on the ground, there is runoff to be concerned about,” he said.

At the meeting, Salmerón shared a draft landscaping concept completed by local garden designer Nadia Malarkey. He said a more detailed concept will be created, at which point public feedback will be -solicited.

Part of that more detailed plan will be a review of the park’s existing trees, Toni Dosik of Inclusive Yellow Springs explained at the meeting, in response to a question from the News. In recent years, two of the park’s largest trees have been cut down after the Village, in consultation with the Tree Committee, deemed them potential hazards.

Dosik emphasized that the public will be consulted throughout the process of planning the park. She said that the park is currently used by retail business owners for lunches, but that there could be many more uses if the park were made more “welcoming.”

“It could be used better, and more,” Dosik said.

This reporter also suggested that picnic tables removed last year be returned to the park ahead of more significant renovation plans to make the park more usable. Council Vice President Marianne MacQueen expressed support for that idea, urging the village to take incremental steps toward improving the park.

“It would be an easy first step, is an example of something that doesn’t cost too much and is something that’s been requested,” she said of returning seating to the park.

Council President Brian Housh said he was supportive of the plan for Beatty Hughes.

“I’m glad we’re focusing on this green-space, which is very important for the village,” he said.

The parcels that became Beatty Hughes Park were purchased by the Village in 1968 and 1969 using a grant from the Department of Housing and Urban Development.

Throughout its history, the park has regularly been proposed as a site for a municipal parking lot, plans which have faced vociferous public opposition, most recently in 2019 and 2004.

Beatty Hughes gets its name from two village leaders from the 1950s and ’60s. William Beatty was a long-serving Council member whose family owned the property that became the park. Leo Hughes was a former Village mayor whose family went on to donate the park’s water fountain after his death in 1995. In the northwest corner of the park are plantings in memory of villager Deborah Sirkin, who died in 1996.

The Village manages about 50 acres of recreational land throughout town, properties that also include Gaunt Park, the Glass Farm wetland, Bill Duncan Park, Hilda M. Rahn Park, Fair Acres Park, a park at Allen and Xenia Avenue and the grounds around the Bryan Center.

Other items from Council’s Feb. 16 agenda will be in next week’s News.

One Response to “Village Council— A plan for the ‘Little Park’”