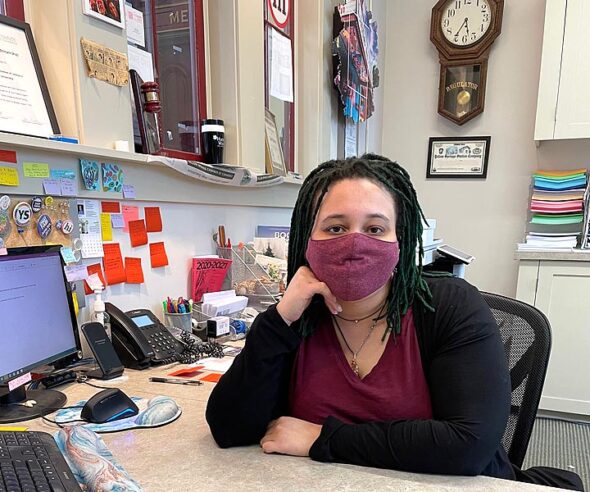 Alexandra Scott is currently the interim director of the Yellow Springs Chamber of Commerce. Scott, who has worked at the chamber since 2014, took over as interim after Karen Wintrow, the former director, left last October. The villager plans to apply for the permanent position when it becomes available. (Photo by Elle Peifer)

After ten years working as director of the Yellow Springs Chamber of Commerce, Karen Wintrow stepped down from the job last October when she moved out of town.

Since then, the Chamber has been in the hands of Alexandra Scott, who is going into her fifth month as its interim director. Recently, the News checked in with Scott to see how it was going.

Scott is a familiar face to the Chamber as well as to the Yellow Springs community. Scott grew up in Columbus and moved to the village in 2012.

“I moved here to go to Antioch. I didn’t stay at Antioch, but I did stay in Yellow Springs,” Scott said.

Through Antioch, Scott made connections to the community and the Chamber, and began working there in June of 2014. Initially working just five hours per week, Scott slowly moved up to become the special events coordinator.

“I was young, inexperienced and had no college degree, but I was the one who was most qualified for the position,” she said.

“I like to make people happy; I like to see people happy,” she said. “That is why I love event planning; you plan a Street Fair or other event and you get to look around and see people having fun and know that you played a part in it.”

It’s one reason Scott was so disappointed when both 2020 Street Fairs and the June 2021 Street Fair had to be canceled due to the ongoing pandemic.

Another impact is the hit the Chamber has taken financially, as most of its income is from Street Fair and other events.

Thankfully, some financial assistance may be on the way.

“The past few weeks has been the first time during the pandemic that the Chamber has been qualified for any government aid,” Scott explained, “so I am working on applying for that right now.”

Scott said that she wishes she could do more for the community during this uncertain time but wants to share that the Chamber is working hard to keep the community updated on everything, including COVID-19 spread and precautions and educational resources. Recent events have included a “Chamber Chat” for members with energy advisors giving tips on how to save on gas and electric expenses for the home and business.

At present, the director position at the Chamber is still open, and the Chamber is not looking to hire someone in the near future due to budget constraints.  Scott said she fully intends to apply for the position when the application process starts, though she is unsure when that will be.

The director position was vacated in early October 2020, and Scott officially started as the interim director on Oct. 24.

“I get a lot of questions asking if I took over the director’s job, the answer is yes and no,” says Scott.

Scott is essentially performing all the duties of director, but remains interim.  She likes to look at things in an educational way.

“It has been a learning experience thus far and there is still a lot for me to learn and do in my position,” she said.

In the meantime, Scott has goals for her time as interim director.

“One thing I would really like to do is strengthen the connection between the Chamber and the downtown businesses,” Scott said.

She has noticed, and been told, that there is a disconnect between the Chamber and some downtown merchants. Scott hopes to rebuild a connection between the two, and do her best to keep the businesses in town updated about the pandemic and relief efforts. She’s spent some of her time walking through town visiting businesses to see how they are doing.

Scott has also been working to reduce the Chamber’s expenditures this year. The Chamber is excited about also finding an alternative to their annual meeting later in the year for members, she said.

Scott, most importantly, would like to keep honoring the Chamber’s mission to serve the Yellow Springs community. Scott explained her fondness for Yellow Springs by sharing a story.

“It was the day after Christmas in 2017,” Scott recalled. “I commented on a car on the virtual yard sale knowing I couldn’t afford it. A few hours later the seller messaged me and said thanks to an anonymous buyer the car is yours.”

Scott described Yellow Springs as the type of place where “stuff like that happens.” It still, to this day, means a lot to her.

“I love that Yellow Springs is the type of place where people are friendly, and you can meet new people,” she said.

During these uncertain times, Scott would like to urge the business owners and community members to check the Chamber’s website and social media to stay up to date and to feel free to reach out to her.

“If you need anything from me, please reach out. I am always here to help the community and will do my best.”

*The writer is an Ohio Wesleyan University junior and Yellow Springs Community Foundation Miller Fellow working for the News. She can be reached at elle.peifer@gmail.com.