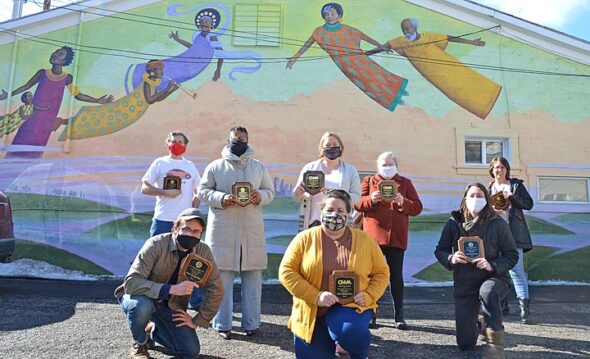 The Yellow Springs News has once again been recognized by its peers for excellence in journalism, advertising and design.

The News was awarded the top prize — Newspaper of the Year — in the 2021 Ohio News Media Association weekly newspaper contest.

The honor marks the 11th straight year the News won the competition among similarly sized weekly papers across the state.

The awards ceremony was held virtually on Friday, Feb. 26. This year’s ONMA convention was canceled due to the ongoing pandemic.

The News came away with 12 first-place finishes in this year’s contest, in addition to four second places and two third places.

The Yellow Springs News won Newspaper of the Year in Division C, papers with circulations of less than 2,500. The News’ circulation is 1,610.

The entire staff was recognized for finishing first in Coronavirus Coverage — a new category — as well as the Best Special Section category for the 2019–20 Guide to Yellow Springs, “A Legacy of Activism,” and the Best Website.

“The Yellow Springs News is known for its intense coverage of big issues, and its coverage of the local impact of the COVID-19 pandemic was no exception,” a judge wrote about the paper’s coronavirus coverage. “From big, intensive looks at serious issues such as mental health, public education, and small-business survival, to little details (such as adding a mask to the front-page flag), the YSN has once again provided tremendous service to its community.”

The reporting staff of Megan Bachman, Audrey Hackett, Carol Simmons and Lauren “Chuck” Shows won first place for News Coverage. A judge wrote that the submission was an “excellent mix of stories and coverage that provide updates and ways for people to get involved. Intensely local without being boosterish, and clearly valued by the community.”

News reporters were honored for their coverage of three important local issues in the category of In-depth Reporting.

Hackett won first place for her series on the Greene County Jail ahead of a ballot tax measure to build a new, larger facility. A judge wrote: “The Yellow Springs News provides a comprehensive, deeply sourced, timely and relevant examination of its jail and jail trends elsewhere in Ohio and the country. Impressive and readable body of work — with all the right angles about incarceration.”

In the category of Best Local Feature, Simmons won first for a piece on Dave Chappelle being awarded the Mark Twain prize, with a judge calling it a “masterfully constructed article” on the ceremony and Chappelle’s “rise to fame.” Simmons traveled to Washington, D.C. for the ceremony using a grant from ONMA.

Simmons picked up her final win for Best Sports Feature with a story about a local cheerleading camp, “Learning to cheer, loud and proud.” “What a fun article,” a judge commented. “It held my attention to the end. The sources, quotes and dialogue made it come to life and provide ‘cheer’ for the reader from start to finish.”

Hackett won first in the Original Column category for her poetry column, First Lines, which ran for three years. “Audrey Hackett hits all the right notes by painting her community with the vivid colors of evocative prose,” a judge wrote. “Sometimes the poetry is beautiful; sometimes whimsical. But with it, she captures the essence of her unique hometown, its fascinating residents and one unique canine whisperer.”

In addition, Hackett’s series on invasive species, “Invasive of the Month,” won first in the category of Community Awareness. A judge commented on how the piece was a “fine example of good explanatory journalism.”

In the field of editorial writing, Hackett won second place for her piece, “No to 500 county jail beds,” in March 2020 and Bachman got third for “A knee on the neck,” written in response to the police killing of George Floyd in Minneapolis in May 2020.