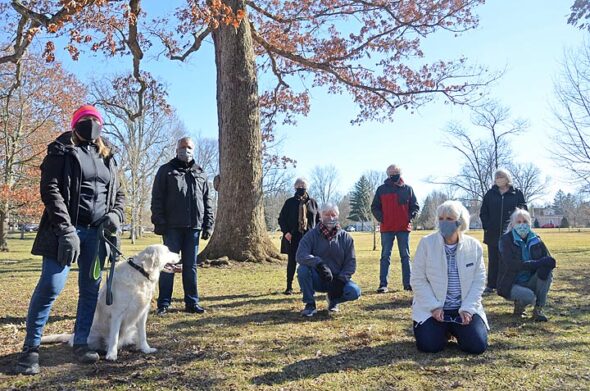 A group of villagers is leading an effort to preserve the undeveloped piece of land on the western side of the Mills Lawn School property. Members of Preserve Mills Lawn Greenspace gathered for a photo beneath a grove of old trees known as the “three sisters,” are, from left, standing, Mary-Margaret LaViska with her dog, Lacy, Michael Slaughter, Anna Bellisari, Parker Buckley and Bernadine Parks; kneeling, Terry Smith, Carol Young and Mary Eby. (Photo by Megan Bachman)

Preserving greenspace on the Mills Lawn Elementary School property and developing a desirable facilities plan for the local schools are not mutually exclusive goals, say a group of residents calling for a portion of the Mills Lawn grounds to be set aside as a permanent community park.

The area of interest, on the western side of the nine-acre school property, is undeveloped, and the members of Preserve Mills Lawn Greenspace, which was formed last year, want to keep it that way.

The group’s effort to preserve approximately five acres at the center of town as greenspace has intensified in recent months as the Yellow Springs School district undertakes a facilities master planning process that could affect the future of local public school properties.

District leaders continue to assert that there is no plan to sell or develop any district-owned property, aside from a recently sold strip of land along the south edge of the middle/high school campus for a bike trail connecting East Enon Road to the Agraria farm property.

Not headed for sale, according to the superintendent and school board members, is the Mills Lawn parcel at issue, which is bounded by East Limestone, Phillips and Elm streets and currently used by the school for outdoor lessons and as a play area during recess.

“There is no plan to sell or develop that property,” Superintendent Terri Holden said last month during the first of three community forums on addressing identified building needs in the district.

Preservation proponents say they understand that facilities planning is underway, with final decisions to be determined; their interest is in getting ahead of the possibility of any plan that affects the Mills Lawn greenspace. They say they believe that an agreeable solution is possible for all parties, and they would like to see community leadership collaborating to find it.

“We want the Village and the schools to work together to come up with a plan that includes preserving the Mills Lawn greenspace,” Parker Buckley said this week in a group interview with the News via Zoom.

On the call, in addition to Buckley, were core group members Bernadine Parks, Anna Bellisari, Mary Eby, Margaret LaViska, Michael Slaughter and Terry Smith. Carol Young is another member, but was unavailable for the call. Council member Laura Curliss has also been working closely with the group.

Most group members live near the Mills Lawn property. They’re not keen on the prospect of a change in their neighborhood, but they say the issue is larger than a single neighborhood.

Their proximity to the school has shown them that the open space is important to the entire community, several said.

“I love seeing the breadth of the ways people use this space,” Mary Eby said, citing family visits, conversations with friends, dog walks, soccer play and outdoor theater. Others noted the disc golf court and the tree-filled space’s availability as a retreat from downtown business as additional uses.

“It’s a comfort zone for the community,” said Michael Slaughter, who grew up on Elm Street across from the school and remembers playing Little League baseball on the school grounds. Slaughter’s mother, Lillian Slaughter, was a longtime teacher at Mills Lawn, now retired.

“The central location is so important,” Eby said. “We love Gaunt Park, and Beatty Hughes is to get welcome improvements, but they’re in neighborhoods. Mills Lawn is central, it’s our Central Park.”

Buckley added that the location has a positive effect on the local quality of life.

“What makes a town attractive? Parks and greenspace. It’s hard to put a monetary value on it.”

Anna Bellisari, who is also a member of the Yellow Springs Tree Committee, noted the environmental benefits of public greenspace. The group also points out on its website, millslawngreenspace.org, that the old-growth and more recently planted memorial trees on the grounds could be put in jeopardy should the property be developed.

While there is no current plan to sell or develop the Mills Lawn property, a variety of circumstances, including past statements by school district leaders, cause concern for the greenspace preservation group.

They initially mobilized last year during Village Council’s discussions about a Comprehensive Land Use Plan for Yellow Springs. During those discussions, group members learned that the Mills Lawn property is zoned “high-density residential,” meaning that sale of the land would open up the possibility for a housing development with multiple homes going on the site.

A petition campaign to designate the area as public greenspace garnered over 200 signatures in a weekend before the Council meeting in which the land use plan was to be approved. Council declined to take action on the matter, citing the property’s ownership by the school district. The petition effort continues.

Community concerns about affordable housing and the local tax burden also play a part. As district leaders anticipate taking a facilities levy to voters in November, they have discussed ways to offset the costs. Board President Steve Conn has spoken favorably for several years about selling district-owned land, saying that the district owns more than it needs. Board member TJ Turner also has said he’s open to the idea.

During the tenure of former Superintendent Mario Basora, the district contracted for a land use study of its properties that, among other findings, concluded that the Mills Lawn greenspace was “underutilized” and that selling the western parcel of the property for development would bring in revenue not only from its sale, but also from the property taxes of the prospective homeowners. Basora also said at the time that an influx of homes there and/or on the current middle/high school campus on East Enon Road would address the village’s perennial affordable housing issue.

The current facilities master planning discussions have featured four leading scenarios, three of which involve transitioning to a K–12 facility at the East Enon Road campus, increasing the chances for selling some or all of the Mills Lawn site. Superintendent Holden said during a meeting of the Yellow Springs Development Corporation late last year that should students move out of the Mills Lawn building, it will likely be torn down.

With district leaders hoping to settle on a facilities plan sometime in April, the greenspace group members say they feel “some urgency” in garnering support to preserve the open area at Mills Lawn.

In speaking about the site, they point not only to its future, but also its past.

The group has gathered documents and newspaper clippings laying out the history of the property, which began as the homestead of William Mills, remembered for platting the village streets and bringing the railroad through town. He built his home at the center of the village in the early 1840s, and local lore says he opened the grounds to villagers as a park-like area. The property passed through different hands after his death, eventually going in 1921 to Antioch College, which in 1949 gave the land to the local schools, which selected the site for construction of a new school building.

In the lead up to the property transfer, a letter from college to district leaders said that the gift was being made with a “mutual understanding” between the two entities that the property would be “utilized for any non-commercial purposes that will promote the welfare of the community generally.”

The letter also states the hope that future leaders would give “genuine consideration to the preservation of a park utilizing as many as possible of the trees.”

While the official deed transfer included no restriction on how the schools would use the property, the college president reiterated Antioch’s desire that a focus on community use be maintained.

Current preservation proponents believe selling the property for development would be counter to the expectations stated at its acquisition.

Bernadine Parks likened the prospect to “destroying our heritage.”

Holden and Conn both have stated in recent months that ultimately the decision about selling belongs to the school board to do what its members think is best for the schools. During a special board meeting last year, Conn stressed that the property belongs to the schools, and was the district’s to sell if so led. Holden said during the recent public forum that she was not in a position to give the property away, even for the “common good.”

“It’s paid for by taxpayers, and we should have a voice in what happens to it,” Parks said.

Group members said they recognize that their efforts may seem adversarial to the school board, but that’s not their intention.

“It’s really not an us-against-them thing,” Terry Smith said. “We know there are many points of view around the village. We’re definitely not adversarial.”

He regrets the bad impression left with school board members following a recent interaction in which the preservation group tried to facilitate a meeting between the board and a member of the community who had a possible land proposal. The school board was reluctant to meet in private, expressing the desire to be transparent with the public. The board invited the preservation group to make a presentation at a public school board meeting, but the group declined.

“We didn’t have a presentation to make,” Smith said this week. “We don’t have a proposal.”

The group declined to give details about the community member.

Like district leaders, the group says they don’t have a plan, but they want to work on one together.

Buckley said he is heartened by an invitation from the superintendent to serve on the facilities planning Community Advisory Team.

The preservation proponents said they think their goals are in line with the district’s.

“We are for good schools. We are for affordable housing. And we are for preserving greenspace at Mills Lawn,” Anna Bellisari said.

“We saved Whitehall [the 940-acre farm set for commercial development in 1999], why can’t we save Mills Lawn?” she added.

“We want there to be a solution for the schools while preserving the greenspace,” Parks said. “I don’t think they’re mutually exclusive.”