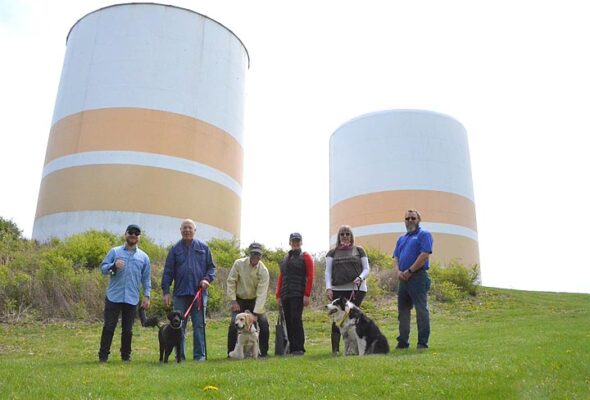 On a sunny afternoon last week, Yellow Springs Dog Park coordinators and organizers gathered at the park’s future 1.3-acre site beneath the water towers at Gaunt Park. Owing to the recent financial donations to the project from villagers David Butcher (at left) and Richard Lapedes (second from left), the dog park is slated to open to the public this September. From Lapedes’ right is Tom Everhart, the “chief petting officer” of the Dayton-local nonprofit Wagtown, which has been instrumental in developing the YS Dog Park; Wagtown’s founder and CEO, and the park’s primary consultant, Beth Miller; villager and dog-enthusiast Linda Rudawski; and Village Public Works Director Johnnie Burns. The pups, from left, are Betty, Sesto and Stella. (Photo by Reilly Dixon)

Area residents — both two- and four-legged — will soon have something to wag their tails about: the long-anticipated Yellow Springs Dog Park is set to open at Gaunt Park this September.

The park’s opening timeframe, while previously undetermined, was made certain upon local entrepreneur and philanthropist David Butcher’s recent contribution to the project. A lifelong local and 2015 Yellow Springs High School graduate, Butcher donated the money needed to finish developing and constructing the dog park.

“It’s been a long time coming,” Butcher told the News in a recent interview.

“This dog park is a much needed feature for the Yellow Springs community,” Butcher said. “I’m not just investing in a place for dogs, but also a place for people.”

Butcher declined to specify the exact amount of his donation, but it is presumed to be in the tens of thousands of dollars. He said the rest needed for initial start-up costs — which includes the construction of various park amenities, structures and features — had been “taken care of.”

As previously reported in the News, the project is estimated to cost $51,410, with $42,000 in capital expenses to create park infrastructure, and $9,410 in annual operation expenses, such as mowing and trimming, waste removal and portable bathroom rental and service.

Thus far, the money for the park has come entirely from donations — dozens of which were conducted through the Yellow Springs Community Foundation. The Foundation is still accepting donations, which are expected to form an endowment to financially sustain the park in the coming years.

Situated at the southernmost point of Gaunt Park and overlooked by the village’s two iconic standpipe water towers, the up-and-coming dog park is sited on 1.3 acres of previously unused land. Upon its completion, the dog park will be encased in chain link fencing that will separate it from the adjacent Gaunt Park and surrounding farmland. Gently sloping downward from the high point of the site of the water towers, the park will offer canines and their companions a scenic view of the southern stretch of the village.

“It’s really just so peaceful out here,” Butcher said. “It’ll be nice to interact with people in such an open area like this — especially coming out of this pandemic. I don’t go to bars, so this will definitely be a place where I socialize.”

He added that he and his partner are looking forward to having the convenience of taking their rescue dog, Luna, a half-German shepherd and half-great Pyrenees, to a park closer to Yellow Springs — a community they intend to call their own for years to come. Previously, they had been driving to a dog park in neighboring Fairborn.

“So, really, this is an investment in my home,” he said. “And I’ve been lucky enough to make enough to support the causes I believe in. That’s what I’m doing here.” 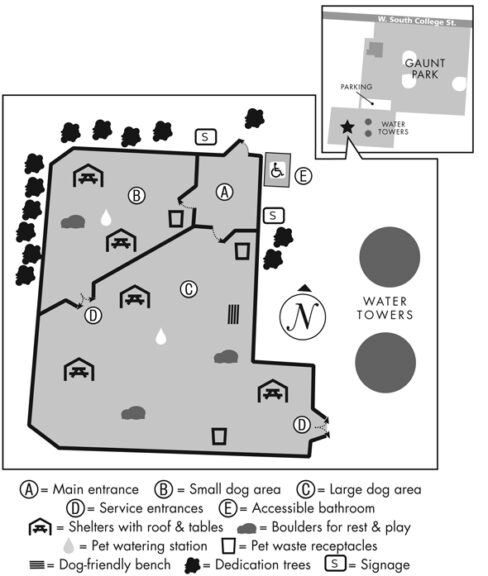 The new Yellow Springs Dog Park consists of three areas over 1.3 acres: A, the entryway; B, a small dog area and C, a large dog area. Also included are shelters with tables and benches, boulders for resting and climbing, watering stations and waste receptacles. A wheelchair accessible portable toilet is also on the premises.

Butcher, who owns the restaurant Flyby BBQ in Beavercreek and whose family owns P&B Electric in Fairborn, said he was happy to use his available resources to finance a project that has had long-standing difficulties getting off the ground.

In 2010, Yellow Springs High School students proposed a dog park at Ellis Park, but it was voted down by Village Council. Then, in 2014, a group of local women mounted another concerted effort to create a village dog park, but were unable to find an adequate location.

“Ultimately, I got tired of waiting for a dog park to happen,” Butcher said with a laugh. “So, I finally reached out and asked ‘How can I help?’”

That was earlier this year, when he made the connection with villager Linda Rudawski, one of the women who had worked toward establishing a park in 2014. Rudawski also runs the Yellow Springs Dog Park group on Facebook, which currently boasts over 400 members. According to her, this Facebook group has been a tool to maintain interest in the establishment of a village dog park — and more recently, keep villagers up-to-date on the progress of this attempt.

“So many pieces and people are coming together in ways they hadn’t said before,” Rudawski said in an interview. “The recent generosity of [Butcher] and others has made all the difference this time around. Success was the only option for this attempt at building a dog park.”

Rudawski learned of the effort to site a dog park at Gaunt Park last September when a separate group of organizers invited her and other interested locals to participate in two public meetings. Those meetings were called by local philanthropist and dog-lover Richard Lapedes, whose pup, Betty, a four-year-old goldendoodle, had then recently “discovered” the Gaunt Park site as a suitable location for a future dog park on one of their regular walks.

“Betty and I thought, ‘Wow! What a wonderful and underutilized piece of land.’ It was a no-brainer,” Lapedes said. “Since that moment, you could say this has been a pet project.”

Like Butcher, Lapedes has contributed significant financial donations to this effort at establishing a dog park. He also declined to specify the exact amount.

“I see myself as a kind of catalyst for this project,” Lapedes said. “My whole role in this thing has been to bring together the talent, the money and the vision.”

And one of the people Lapedes brought into the fold and who came to lead last September’s public meetings was outside consultant Beth Miller, the founder of Wagtown, a Dayton-based nonprofit that works to establish dog-friendly neighborhoods and parks throughout the area and beyond.

Miller has been instrumental in synthesizing the visions of Lapedes, Rudawski, Butcher and other Yellow Springs community members who have expressed interest in the Gaunt Park project. In addition to designing the physical landscape of the site, Miller has also envisioned an ethos for the future dog park. According to Wagtown’s plans, the Yellow Springs Dog Park will be a “S.M.A.R.T. Dog Park,” which will set into motion certain behavioral standards for humans and dogs alike. The acronym stands for safety, manners, awareness, responsibility and training.

“At the end of the day, this is going to be so much more than just a dog park,” Miller said in an interview with the News. “It’s being designed to reflect the values of Yellow Springs. We want the Yellow Springs Dog Park to share in the cultural, environmental and social priorities of the community.”

Miller said that even with the experience and expertise in establishing successful dog parks that she’s brought to the table, this particular project wouldn’t be happening without Butcher and Lapedes’ contributions and the continued interest of Rudawski and other dedicated villagers.

“This whole journey has felt almost magical,” Miller said of the group’s collaboration. “It’s almost like kismet, but ultimately, it’s the dogs that brought us all together.”

Lapedes said the project offers a model for other initatives.

“The making of the Yellow Springs Dog Park should be a template for other projects in the future,” he said. “People are coming together, turning a mundane spot into something much more dynamic and much more creative.”

The building of a park

Currently, a Village crew, led by Public Works Director Johnnie Burns, is in the process of setting up a fence and clearing out much of the overgrown brush around the perimeter of the park.

“It’s been a slow process, but we’re getting it done,” Burns told the News.

According to Burns, what comes before the September ribbon-cutting is no small list of undertakings. There’s the installation of underground water lines for future drinking fountains; setting up additional fencing for separating the large and small dog areas; establishing a new parking lot; laying several slabs of concrete; building shelters and a welcome kiosk; raising various signage; and bringing in all the canine amenities like hitching posts, boulders, waste receptacles and more.

“And the Village government and taxpayers aren’t paying a penny for any of this thanks to the generous donations this project has received,” Burns said, adding that much of the remaining work is being contracted out to independent companies.

Burns said that he was excited when Village Council last fall approved the group’s decision to site the dog park beneath the water towers — to “finally” have that land managed properly.

Even before the dog park project was underway, Burns said he and Village crews had a difficult time in maintaining and cutting back the invasive plant species beneath the water towers. He added that couches and traces of illicit substances had been hidden by the overgrown brush.

In addition to dealing with the vegetation both around and within the perimeter of the dog park, landscaping crews will soon get to work on leveling out a lower section of the hill on which the water towers sit. Burns said this is in the interest of making sure the dog park and its parking lot are accessible for people with various levels of mobility.

Despite the considerable amount of work that remains before the park can host the village’s furry friends, both Miller and Burns are optimistic that the park will meet its goal of opening in September. They said the extensive planning behind this dog park has allowed the group to move confidently forward with its development.

“In some way, the pandemic helped us along with this project,” Burns said. “As a group, we were able to sit and talk through our ideas for this project a lot longer than we would have any other year. COVID kept us from rushing to open the park and possibly doing it the wrong way.”

Burns added that this additional time gives the group the opportunity to plan around any future problems the park may face.

“We’ve been working for the past year-and-a-half to iron out as many potential logistical challenges as possible,” said Burns.

“What we’ve tried to do is imagine the worst case scenarios — dogs getting hurt, escaping, getting lost — and we’re building the park with those situations in mind to keep them from happening,” she said.

One problem, however, Miller sees as somewhat inevitable.

“I’ve been to dog parks all over the country and I have never seen a dog park that didn’t have an issue with poop,” she said. “Not one.”

To stay current with the continued development and building of the Yellow Springs Dog Park or to learn how to get involved, visit the project’s page on Wagtown’s website at http://www.wagtown.org/itstime. That website also has a link to the Yellow Springs Community Foundation’s page to make a secure donation to the project.