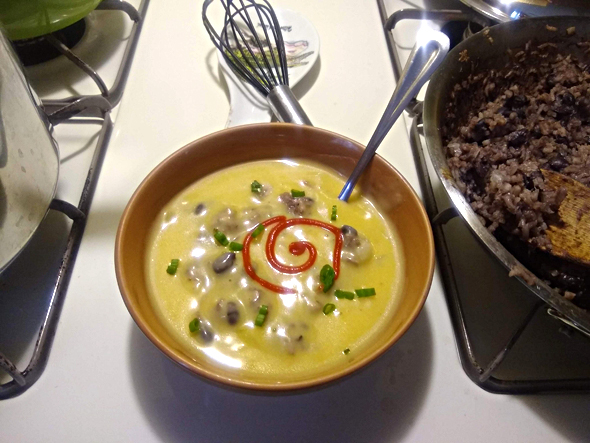 I made beer cheese soup for the first time during the initial weeks of lockdown in March of last year. I had a few cans of YS Brewery’s Boat Show that someone had given us and we’d never gotten around to drinking — I was later informed that this was a criminal use of the revered beverage — a big ol’ bag of shredded cheddar and, like many a-folk then, all the time in the world

Melt butter over medium heat in pot. Add flour gradually, stirring until a pasty roux forms. Allow the roux to cook for a minute or two, until golden brown.

Slowly and steadily, whisk in broth a cup at a time. Depending on how thick you prefer your soup, you may need to whisk in more flour during this process if you pour the broth too quickly or find that it’s not as thick as you like.

After all the broth has been added, cook uncovered on medium heat for another 7–10 minutes.

Decrease heat to medium low and stir in cheese a bit at a time, allowing each addition to melt before adding another.

When cheese is fully incorporated, pour in beer a little at a time and taste to determine ideal beer addition.

This soup is great for freezing: when reheating, add broth or milk over low heat, as the roux causes the soup to coagulate in the fridge or freezer. Also excellent served over beans and rice — not an authentic presentation, of course, but we all find our little customizations, our little augmentations.

I’d first had beer cheese soup just a few months before. I was at Disney World with my extended family — husband, child, sisters, brother-in-law, niece and parents — in November 2019, when the park was already all tarted up for Christmas. Holidays are the worst time of year to visit a large theme park, since everybody in the entire world is there, looking to make magical, precious family memories at the House of Mouse. You can’t walk anywhere without being sandwiched tightly between sweaty, defeated strangers, expressions of regret in their eyes as small arms tug at their shirts, pulling them into the dreaded Country Bear Jamboree.

That, of course, is an exaggeration — hardly anybody goes on Country Bear Jamboree anymore, even on a crowded day.

But this glut of Mickey-lovers meant that, on our last night in Kissimmee, the only place in the whole of Walt Disney World where we could find a place to eat was at 8:30 p.m.at the Biergarten in the Germany pavilion of Epcot’s World Showcase, a collection of mini versions of a handful of African, Asian, European and North American countries. By that point in the night — the end of a fun, but long week — even the kids were dead on their feet.

But it turned out to be a pretty magical, precious night, all things considered. There was only one thing on the menu at the Biergarten: a massive, multi-winged buffet, loaded with all the sausages, schnitzels, potatoes and spaetzles you could possibly eat. The young woman who brought our root beer refills was named Linda, herself from Germany, one of many young people who come from around the world every year to work in Disney’s scaled-down versions of their home countries as part of the dubiously named “Cultural Exchange Program.” She bore my father’s Dad Humor™ with admirable aplomb, laughing and rolling her eyes like she was a long-lost sister. When I couldn’t decide between potato leek and beer cheese soup, she recommended the latter; as though attempting to prove to my new sister Linda that the rumors of American excess were true, I ate three bowls of it.

We lingered over dinner until we realized that we were the only people left in the restaurant and that it was 9:45 p.m. — technically, the park was closed. We said “goodbye” to Linda and shuffled out the door and into the World Showcase — and realized we were alone. Everyone else who had been in that part of the park — which is furthest from the entrances — had already made their way out. We passed from Germany into China, pausing to marvel at how dark and still everything was, how quiet. For about 20 minutes, as we passed through Norway and then Mexico, we were an island, the only people in the world — well, the gilded Disney version of the world, anyway.

I thought about that night a lot early in the pandemic. It was a different breed of isolation than the kind that arose only a few months later. I missed my friends, my family. I missed buffets. Hell, I missed Linda.

But Google is ever my friend and helpmeet, and I used it to soothe myself by locating the recipe for the Epcot Biergarten’s beer cheese soup. I scaled down the recipe, which would have netted three gallons of soup, as well as my math skills would allow. This recipe yields a prima donna of a soup, one which requires a lot of attention and encouragement. I’ve made it maybe seven or eight times since last March and I’ve found that, like many things in my life, my success in the venture is directly tied to my patience during the process. Incorporate the broth too quickly? A thin, cheesy gruel will result. Get tired of standing over the hot stove and walk away, and the whole concoction may overheat and cause the cheese to separate into small, grainy bits.

Patience was something I had in abundance at the beginning of the pandemic — what else was there to do but wait and see, and eat soup and dream of Disney? Now that this way of living — that is, always at home — is my normal, I have other things I want to get back to, like binging TV while getting my feet rubbed by the foot massager I impulsively bought myself on Amazon.

And with the arrival of the vaccine — the horizon in sight — I find myself impatient to return to the world at large. The world is calling. Adventure is calling. Linda is calling.

But, as the soup reminds me, patience is a virtue — or at least it makes things taste better in the end, anyway.

One Response to “Thought for Food— Beer cheese soup”