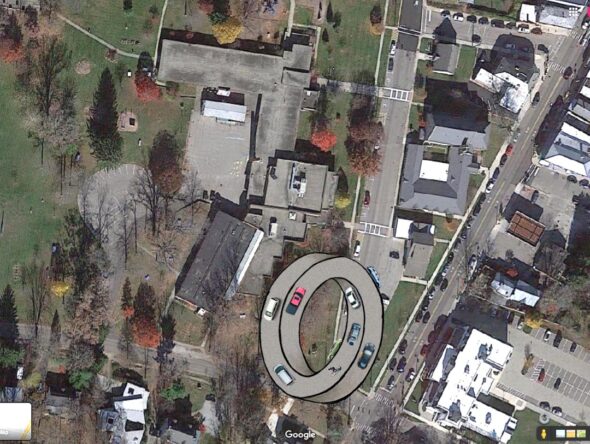 Thursday morning’s rerouting of traffic into a newly built loop — seen here from space — was intended to provide a safe drop-off for Mills Lawn students. Instead, the move brought agony to dozens as it was gradually revealed there was no way to exit the Moebius-like structure. Drivers will likely remain in a permanent holding pattern, relying on the generosity of others for sustenance. (Photo via GARGLE EARTH)

What started out as another attempt at reworking traffic flow to accommodate student drop-off at Mills Lawn School turned into a dystopian, one-dimensional nightmare of automotive agony and no escape. As cars entered into the newly created traffic pattern Thursday, they were unable to return to the open road.

The arrangement took drivers by surprise, as signage and bollards had been put in place at night so as not to disrupt morning commuters. One by one, cars, minivans and even a few bicycles with trailers pulled up, dropped off a child or two, then rolled on slowly, unaware, into the Sartre-esque purgatory that awaited them.

“I really don’t understand it. It’s a simple circular drop-off,” she said, ignoring the pleas of several students whose parents were circling without hope of ever escaping again. “They should be able to turn off here,” Escher noted, then adding “— uh oh…nope!” and pointing to a “no left turn” sign that had been placed to the left of a “no right turn” sign. “And dang, that’s a one-way, too. Loops back in on itself. And you can’t back up, either, ‘cause you’ll get a ticket.”

Always looking for a teachable moment, Mills Lawn sixth-grade math teacher Matt Imatika pointed out to several horrified students that their anguished parents were “lucky,” because very few people get to end up on a one-dimensional, endless surface which has no beginning or end, nor top or bottom.

“Of course, they’ll be on there forever now — but that’s so cool, isn’t it!” Imatika said, waving to the dead-eyed shell of a former parent staring from the passenger window of a car moving slowly past for the fifth time. “Don’t worry, ” Imatika chimed, trying to perk up the miserable youths, “they’ll be there when you get out of school in the afternoon.”