Imagine grabbing a beer from a local restaurant, walking with it in hand on the sidewalk downtown and stopping by some local shops, all while sipping away.

That image could become reality if the Village creates a DORA, or designated outdoor refreshment area, in downtown Yellow Springs.

Village Council briefly discussed the idea during the new business portion of its meeting on April 19. No legislation was considered or votes taken.

In a DORA, those 21 and older can legally consume alcohol on public property. Retail establishments can also allow customers to bring in alcoholic beverages, but the drinks can’t be taken from one restaurant or bar to another.

“The goal is to enhance the outdoor dining and entertainment experience while encouraging more business for participating restaurants and retail establishments in the area,” Salmerón said.

DORAs were permitted by Ohio law in 2015. The first community to create one was Middletown. There are also now DORAs in Springfield, Springboro, Lebanon, Tipp City and in Dayton’s Oregon District. Xenia City Council rejected a proposal for a DORA last month, saying more public input was needed.

Some DORAs operate daily, while others are only permitted on weekends or special events. 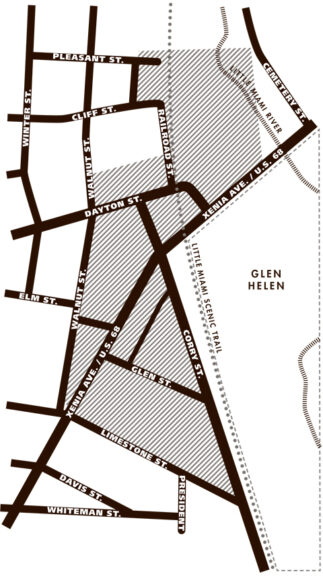 The hashed area above demarks the tentative boundaries of a designated outdoor refreshment area, or DORA, proposed for downtown Yellow Springs. In the DORA, adults 21 and older could drink alcohol on public property such as sidewalks and in businesses where allowed. (Map data: Village of Yellow Springs)

Salmerón proposed a general area of town for the local DORA, a “polygon shape” bounded by Yellow Springs Brewery and the Bryan Center to the north, Walnut Street to the west, Limestone Street to the south and Corry Street and U.S. 68 to the east.

According to Ohio law, as a municipality of under 35,000, the Village is allowed to create a single DORA in town that can be up to 150 contiguous acres.

Salmerón said that patrons would have to purchase the beverage in a special cup so that outside drinks are not brought in.

“These would be branded and unique so that they are not the traditional red cup that is at a party,” Salmerón said.

Council members were generally supportive of the idea. Salmerón will bring legislation to consider at a future meeting.

Council Member Laura Curliss said she has been in several DORAs without any negative impacts.

“I have run into them in several areas and I can’t tell much difference,” she said.

Curliss added that in addition to the DORA, the Village could also create an outdoor dining area under a tent on the Bryan Center lawn.

Council Member Lisa Kreeger said she wants to hear from YS Police Chief Brian Carlson about “any potential risks he sees to residents, visitors,” including a possible increase in drunk driving.

Council Member Kevin Stokes said he was in favor of the idea, but suggested weekends only at the beginning “so it doesn’t get out of control.”

Council Vice President Mariane MacQueen said that she had “mixed feelings” about the idea.

Council unanimously passed a resolution in support of the Glen Helen Association’s application for funding from the Ohio Public Works Commission for improvements to the nature preserve. The Glen is seeking more than a half-million dollars from the state organization for a new parking area off State Route 343, additional signage, bridges and boardwalks and the demolition of an old power plant on the property (the total amount requested has not yet been finalized). Glen Helen Executive Director Nick Boutis said that he will return to Council soon to request Village funding specifically to help take down the old power plant, which he said is a potential hazard for visitors and the area ecology. Council President Housh said the amount requested from the Village for that project would be $125,000.

Oil recycling to be discontinued

Salmerón reported that the Village’s oil recycling container, located behind the Bryan Center, poses an “unnecessary risk to Glen Helen” should it spill. He added the Village could not find another suitable location for the disposal and will stop offering the recycling entirely within a month.

Council voted unanimously to charge residents $8 to participate in the annual spring clean-up, scheduled for May 3–7, on the day residents typically have their refuse collected. Last year, the event cost the Village $12,677, Salmerón reported. For more information on items that can be placed at the curb, see page 2.

Kineta Sanford gave an update on the Inclusive and Resilient Yellow Springs and Livable/Equitable/Age Friendly Partnership. The group will soon be launching a communitywide survey to learn about barriers for community members, and will host a virtual “cost of poverty experience.” The partnership has also asked the Village in a letter to dedicate some of its COVID relief funds for rent and utility assistance.

Salmerón aired the possibility that the Village create a state-certified building department to manage permits, review plans and inspect buildings. Currently, local projects have to go through the Greene County Building Department, which Salmerón said is taking longer than usual to approve projects. The Village has recently received complaints about the slowness at the county department, he added, which he said is not new.

Council briefly discussed the possible renaming of the Ellis Park bike spur in honor of Ed Dressler, a one-time villager who was instrumental in the creation of the Little Miami Scenic Trail. Curliss suggested it be called the “Dressler Connector.”

Council voted unanimously in support of the federal Energy Innovation and Carbon Dividend Act, H.R. 2307, which would endorse a carbon fee and dividend to get America to net-zero carbon pollution by 2050. The measure was brought to Council by resident Tim Barhorst, a member of the Citizens’ Climate Lobby.

Council’s next regular meeting is Monday, May 3, at 7 p.m. via Zoom: zoom.us/j/3555457065. Council will discuss potential changes to legislation that governs Airbnbs, among other items.