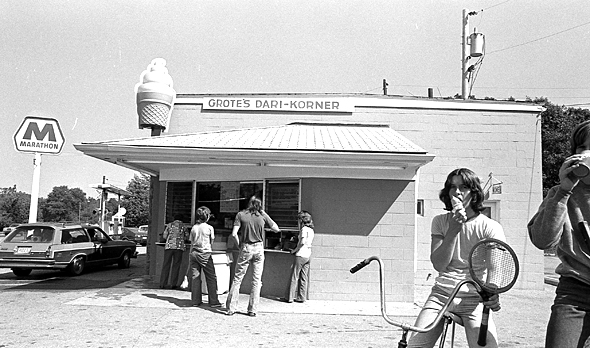 Grote's Dari-Korner at the intersection of Corry St. and Xenia Ave. (YS News archive photo from 1975)

Antioch hires first faculty, gains on accreditation. “Antioch College continues its forward motion toward admitting new students next fall, announcing this week that the college has hired its first three tenure-track faculty members. And last week, the revived college received notice that it successfully jumped the first hurdle on the road to gaining accreditation.”

‘Seek the fire-and-rescue life?’ “Alex Wendt came to Miami Township Fire-Rescue to do something to serve the community and because he wanted to see what the life of a firefighter was about. A student at Wittenberg University at the time, he hoped to go to law school after graduation. A little over a year later, he is now a level I firefighter and EMS trainee.” [Wendt continues 10 years later as a full-time Miami Township emergency medical technician and firefighter.]

Omar Robinson dies. “Omar Anthony Robinson … died unexpectedly Sunday, March 24. As a local businessman and real estate developer, Mr. Robinson was responsible for the development of the Omar Estates subdivision. It was the first development built specifically to meet the housing needs of blacks in Yellow Springs, who because of racial prejudice at the time had difficulty finding and financing homes locally.”

Co-housing meetings. “Meetings on developing a co-housing project in Yellow Springs will be held each Sunday at 7 p.m. at the First Presbyterian Church.”

Affordable housing needed. “A ‘substantial number’ of people who live and work in Yellow Springs would be interested in affordable housing if it were available, according to the results of a recent survey conducted by the Council-appointed Affordable Housing Task Force. … Forty-six percent said they would be interested in participating in a ‘sweat equity’ program, which involves homeowners in the construction of their own homes.”

Business incubator growing. “In its seventh month of operation, the Yellow Springs-based Miami Valley Regional Small Business Incubator is ‘moving along on target.’ … To date, six businesses have moved into the incubator, which is located in the former Fels House [Sontag Fels building on Livermore Street], and three more are expected by the end of the month. Hopes are to house 25 clients by the end of the year and up to 100 in the future.”

Trash burning banned. “Garbage collections are running almost twice as large in volume as has been average in the recent past, Village Manager Howard Kahoe reported.” [Household burning of trash had recently been banned.]

Good Earth Fair. “The Good Earth Fair, planned for April 25, at Bryan Center, will culminate a week of ecology-oriented activities.”

General Motors sells to Morris Bean. “Morris Bean announced yesterday that negotiations with General Motors had been successfully completed for his new company to take over the manufacturing equipment now housed in the Antioch Foundry.”

Spillan development. “L.W. Spillan, representing an estate of which the heirs are himself, his sister and brother, approached the village council Monday night to obtain their reaction to the plans for a real estate development which the Spillans are planning south of the village. … More than thirty acres, lying just south of present village limits would be sub-divided and at some future date added to the village.”

Speed limits rise. “Fifty-mile-per-hour speed limit signs will be back on all highways in Ohio by approximately April 1. The President’s 35-mile-an-hour Victory Speed Limit signs were removed at the close of World War II.”

Fifteen-hundred watch basketball victory. “One of the most glorious events in the history of Yellow Springs was when the local high school basketball team cleaned up on the Xenia team in the tournament last Saturday evening before fifteen hundred spectators at Kelly Hall [gymnasium in Antioch Hall, now an auditorium]. The boys were not content to merely win, but they piled up a score of two to one, 9 to 18. … Playing for Yellow Springs were Bausman, Donley, Williams, Shoup, Weiss, LeSourd, Gegner, Hudson, McCallister.”

Lawn fertilizer? “Spreading manure on the lawn is likely to introduce a lot of weed seed.”