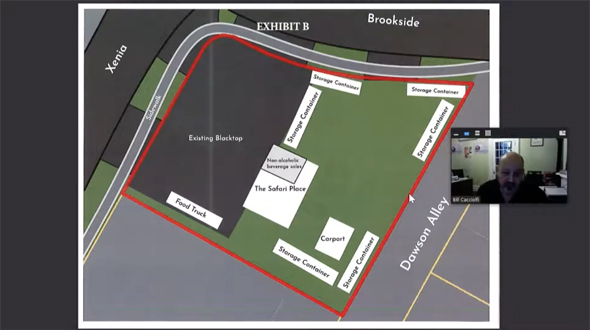 Village resident Bill Cacciolfi is turning the former Shattuck’s Garage auto repair site at Xenia Avenue and Brookside Drive into the Safari Place, with a variety of eclectic uses planned.

At its last regular meeting on April 13, Planning Commission unanimously approved a conditional use permit for the property.

In addition to approving car sales and shows and kayak rentals, the commission also gave a green light to mobile food trucks and retail sales of food and non-alcoholic beverages at the site.

Cacciolfi is the owner of New World Expeditions, which organizes safari tours in Zimbabwe and South Africa. He previously operated an outdoor adventure store in Yellow Springs by that name, from 1984–1997. Cacciolfi runs his current business out of his Xenia Avenue property, the historic home known as the Fess House, which he purchased in 2016.

Cacciolfi bought the property for the Safari Place, at 1435 Xenia Ave,. from James and Barbara Shattuck in March for $29,000, according to county records. That property had for decades been the site of nuisance complaints, as numerous junk vehicles were stored onsite, Village Planning and Zoning Administrator Denise Swinger explained at the meeting. In 2005, the owners were found to be in violation of local laws by running a junkyard, Swinger added, but continued doing so until 2016, when local police found 37 vehicles on site.

Since he purchased the property, Cacciolfi has been cleaning it up, and has remediated an undisclosed underground storage tank that might have had hazardous material inside, according to Village officials.

Automotive-related businesses are already permitted in the B-2 business district, but Cacciolfi wanted to add other uses to the property, Swinger explained of the hearing.

Appearing before Planning Commission via Zoom, Cacciolfi clarified his vision for the property. He said he wants to limit car sales to four or five at a time, mostly cars owned by friends, to take advantage of what he called a “high visibility area.”

“Car sales will be limited to my personal friends who will have their personal muscle cars for sale,” he said, naming such vehicles as Jaguars, Mercedes or Land Rovers.

Instead, Cacciolfi wants to focus on car shows and other events to raise money for charitable causes, he said. Some examples he shared include car shows featuring dragsters from the nearby Kil-Kare Speedway, or Harley-Davidson and Indian motorcycle shows. He said he envisions that his parking lots will be filled on weekend days when there is an event.

“I’m in the tourism business, so I can have a tour to a snake farm and have people at that,” Cacciolfi said. “We can polish up anything and get it sold as a tour.”

Another use is to store kayaks, which will be used for water craft tours of area lakes, Cacciolfi explained. In that case, kayakers will meet at a designated location, with kayaks brought to them from the Safari Place. The kayaks are currently stored in one of three shipping containers on the property, which will be increased to six containers as part of a site plan presented at the meeting.

Cacciolfi said he is also looking into selling campers and camping trailers at the site.

“I don’t want to be a permanent car dealership, but I do want to open it up to these little, eco-friendly campers,” he said.

In response to a question from Village Solicitor Breanne Parcels, Cacciolfi said he does not have a dealer’s license from the Ohio Bureau of Motor Vehicles, but would get one if necessary.

In approving the permit, Planning Commision required Cacciolfi to comply with state and county regulations for car and food sales. Other conditions include 90-degree downward-facing lights and the approval by Village staff of a parking plan, which will additionally address any issues with visibility for those turning from Brookside Drive onto Xenia Avenue. Concerns over visibility were raised by an area neighbor, Carol Cottom, during the public hearing.

In other Planning Commission business from their March and April agendas—

• In March, Planning Commission approved in a 4–0 vote an additional use for a Yellow Springs Baking Company at the Millworks Industrial Park. In February, the new bakery, a joint venture of Karina Tafolla, Rob Houk and Frank Doden, received commission approval for wholesale bakery sales. In March, the commission went on to approve retail sales at the site, with Planning Commission President Doden recusing since he is involved in the venture. However, there won’t be any onsite food sales or consumption, and no display cases, according to Houk, who appeared via Zoom. Instead, customers will order and pay for their baked goods online and either pick them up or have them delivered.

• In April, Planning Commission unanimously approved a home occupation permit for Sarah Strong, who runs art and nature classes, mostly for area youth, out of her home at 256 Northwood Drive. Strong said she has been running similar classes for 10 years in various locations in town with no prior complaints, adding that she was not aware of needing a home occupation permit. Strong’s plan is for classes of eight or fewer students three times per week, one weekend workshop per month and up to six weeks of summer camps for six hours per day, four to five days per week.

Adjacent neighbor Dionne Greenberg spoke during the public hearing about her concerns over an increase in traffic and children playing in the nearby creek and coming onto her and her husband’s property. The commission approved the use with conditions that Strong log the number of visits to the property, get an inspection by Miami Township Fire Rescue, ensure pickup and drop off takes place on her property and comply with all county and state licensure requirements.

• In March and April, Planning Commission approved three new permits for transient guest lodging establishments, or TGLs, two of which were non-owner occupied. Over those two meetings, the commission also discussed their recommendations for amendments to the zoning code regulating TGLs, which were passed on to Village Council.

• Swinger noted that there are several conditional use permit applications in process that may be discussed at an upcoming Planning Commission meeting. Those include hearings for four new TGLs; the new comedy club in the former Miami Township firehouse; an expansion at Cresco Labs; plans for the Union Schoolhouse, which Dave Chappelle purchased in December 2020; and a resident planning agribusiness and education activities.

Planning Commission’s next regular meeting is Tuesday, May 11, via Zoom.