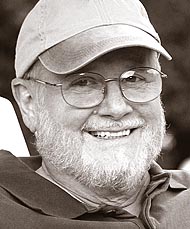 Robert H. Devine departed this earthly plane on Nov. 6, 2020, peacefully and at home.

He lived a life full of multiple passions. Besides his love of reading, film, art, sports and a good sandwich, he also had a deep love and affection for approaching thunderstorms on the Taos mesa, sifting sands in Chaco Canyon, the Manhattan skyline, a quality truck stop, independent bookstores, a pool hall jukebox, launching fireworks, slot machines, and a cold Red Stripe beer on a sandy beach.

As a boy in Garfield Heights, Ohio, Bob developed his love for baseball through a fascination for the physics involved in using the body and the whip of the arm to hurl objects at high speed. He amassed a cherished baseball card collection and attended Cleveland Indian games, where he first saw Bill Feller pitch — a pitching style he hoped to one day emulate. Pitcher Satchel Paige was quoted regularly in his home, but it wasn’t until later in life that these words had special meaning, “Work like you don’t need the money. Love like you’ve never been hurt. Dance like nobody’s watching.”

The family moved to Florham Park, N.J., where Bob pitched in Little League, leading his team to the New Jersey state finals with his wicked fastball. Perhaps it was his experience as a Little League umpire where Bob first developed the capacity to remain calm in the face of heated debate.

Bob eventually developed a passion for soccer, excelling as a midfielder. He described soccer as the “cultivation of peripheral vision, the beauty of occupying the interior and identifying the patterns, the relationships and the opening and closing of space.” The sport was both a centering and calming influence on his life.

Sports were also a means of survival in high school. As a full-time athlete, as well as a literature devotee with a dream of teaching English, he navigated two separate worlds. His English teacher, Michael Keisman, who became an influential lifelong mentor, introduced him to literature and philosophy through a rigorous writing curriculum that emphasized critical thinking. Keisman was responsible for preparing Bob to become the first in his family to go to college, as well as encouraging his application to Antioch, a midwestern college with a reputation for radicalism and no intercollegiate sports.

The long train ride from Newark to Dayton with several returning upper-class students, including Stephen Jay Gould (Harvard paleontologist) and his brother Pete (Broadway production designer) was particularly memorable. Bob sat quietly and listened as these experienced, articulate intellectuals stayed up all night discussing Kant, Hegel, Marx, the U.S.’s imperialist position in Guatemala, and so much more. By the time they arrived in Dayton, Bob was convinced he did not belong and was prepared to get on the next train home. Stephen persuaded him to give Antioch a try, advising him to “Just take some rocks and dirt courses and you’ll be fine.” And so began Bob’s more than 50-year relationship with Antioch College.

Music was Bob’s muse, and there was a time when he was rarely seen without his Martin guitar in hand. As a student, Bob discovered a culture of regional folk performers, and played at the Sacred Mushroom in Columbus and later at Club 47 in Boston while on co-op. Listening to and playing music was as essential to his undergraduate education as the books he read and the classes he took. Billy Hamilton, Antioch’s food service manager at the time, brought musicians from around the region to play free-form jazz gigs in the campus coffee shop lasting until 2 a.m. Later, when Bob became president of Antioch, he revived this tradition of Thursday night jazz with Dayton-based musicians set up in the old Antioch Inn, providing students with snacks and a mellow space to engage and study.

Bob had many adventures that made for fascinating storytelling. In 1967, the same year he graduated from Antioch, he and a partner purchased the Epic Bookshop in downtown Yellow Springs for $200 from its founder, Joe David Bellamy (novelist and Antioch alum), eventually establishing it as a well-known regional source of occult books and contemporary fiction and poetry, with the I-Ching at the core of the collection. As the lead faculty member on a student-initiated Antioch Study Abroad term, Bob took a group of students to the Jung Institute in Zurich,  where he focused his studies on alchemy and transformation but remained confounded by the sophisticated Swiss washing machine at the youth hostel where they all lived.

One of Bob’s lesser-known accomplishments consisted of successfully completing the Big Texan Challenge in Amarillo, Texas. Following a year of being a vegetarian, and finding himself both broke and hungry on Route 66, he decided to take the one hour 72-ounce-steak-plus-all-the-sides challenge for a free meal. A coveted certificate made up for being sick for days.

Bob was one of the founding faculty members originating Antioch College’s nationally known program in critical communications, film and video. He taught over 27 different courses, including film history and theory, First Amendment and political dissent, leadership, popular culture, media and social change, and documentary. His administrative roles at Antioch College included department chair, associate dean, dean of faculty and president (1996 to 2001). Throughout his tenure (a process he endured twice), he continued to teach and wear his signature suit and tie, challenging students to consider how wardrobe can influence how others treat you.

Bob remained active in the fields of community media, public access and participatory democratic media. In 1981, the emergence of community access presented an incredible opportunity to put his theoretical orientation toward social change to work, and he left his tenured faculty position to become the Senior Studio Coordinator at a startup in Dallas. He also served as the start-up executive director of the Milwaukee Access Telecommunications Authority and later as Interim Executive Director of the Manhattan Neighborhood Network. A consultant to a number of access organizations across the country, he served on the board of Alliance for Community Media, and contributed to Community Media Review, serving on its editorial board for several decades. In 1993, Bob was recognized for his work in the field of community media with the Alliance for Community Media’s “George Stoney Award for Humanistic Communications,” and in 2005, the Antioch College Alumni Association presented him with the “J.D. Dawson Award” for his contributions to the college.

Breaking bread with family, friends and students always had special meaning and purpose.

Family gatherings around meals, often including Lori Beckman, mother of his two oldest boys, were important traditions. As president, he hosted monthly pizza get-togethers with students in common rooms or shared a food co-op meal in a dorm kitchen. Bob viewed this discourse as a means of community building, as well as what he believed was the most important learning, that which is situated in practice. The paradox of the Antioch experience, he described in his 2000 commencement address, “is that we work, study and learn together here in this crucible, and form bonds of heart and mind. At the same time, we struggle with one another, with our differences, our imperfections, our human limitations. We negotiate our boundaries and oftentimes fray the edges of what we hope will be a civil culture. In the end, I think, it is the bonds of common experience and caring that prevail.”

In recent months, Bob wrote, “I am happy with the journey of my life. I love my four amazing children and am proud of what each of them has made of himself. I’ve had the privilege and sheer joy of sharing my heart and my life for 40 years with my very best friend, Callie. My work with students has provided satisfaction beyond my wildest dreams, and my love of students and learning have provided the compass for most of what I’ve done in this life. I feel as though I’ve been fortunate enough to win a few small victories for humanity and am at peace.”

Bob is survived by his loving wife, Callie; his children, Jesse Michael (Rachael), Eric Gene (Sherral), Sean Patric (Cory) and Eamonn Chas; his brothers, Michael (Pat) and Donald (Carol); grandchildren, Zoe, Spencer and Simon; and his godson, Polo Chaikwang. A celebration of Bob’s life is planned for Saturday, Sept. 25, 2021, at 2 p.m., in the Herndon Gallery at Antioch College, for vaccinated family and friends in accordance with the college’s pandemic protocols at that time. The event will also be livestreamed for those unable to attend.