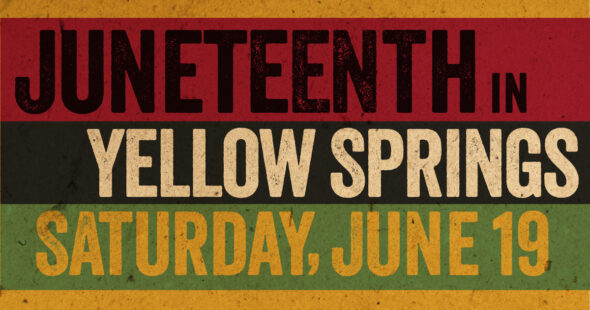 Juneteenth celebrations in the village

In January of this year, Village Council passed a resolution that recognized Juneteenth as an official holiday in Yellow Springs; in March, the day was adopted as a paid holiday for Village employees. This weekend, the community at large will observe Juneteenth with two celebrations on Saturday, June 19.

Juneteenth commemorates the June 19, 1865, announcement to the enslaved Black Americans of Galveston, Texas, that they were no longer enslaved — two years after the signing of the Emancipation Proclamation and two months after the Confederacy surrendered, ending the Civil War. Juneteenth has since been observed as a celebration of the emancipation of Black Americans from enslavement, and has been adopted as a state holiday in 47 states, including Ohio. Closer to home, Antioch College agreed last year to make June 19 a paid holiday in observance of Juneteenth in perpetuity at the suggestion of the school’s Black Student Union.

Village Council Member Kevin Stokes, who introduced the resolution for the Village to do the same, said this year felt like the right time to acknowledge the celebration on a local government level.

“There’s been a growing momentum with racial reckoning, and last year was almost a missing year, so it also feels like a chance to play catch-up,” he said. “Declaring [Juneteenth] as a holiday is primarily ceremonial, but that’s where the appetite was developed to make it more of a serious deal.”

Celebrating Juneteenth is not new to Yellow Springs — the now-defunct African American Cross-Cultural Works held a series of events in 2010, and the holiday has been observed annually in the village since 2013, with celebrations planned jointly by First Baptist Church and Central Chapel AME Church. In 2019, another Juneteenth celebration was hosted in conjunction with the re-establishment of Help Us Make a Nation, or H.U.M.A.N., at Mills Park Hotel, planned and executed by villager Carmen Lee.

This year, H.U.M.A.N. — helmed, in part, by Lee — will host a celebration with a two-fold purpose. The event, CommuniQ, will be held in Beatty Hughes Park from 2–4 p.m. on June 19, and will recognize both the completion of two murals in Kieth’s Alley and the 156th anniversary of Juneteenth.

Lee wrote the grant for artist Pierre Nagley to complete the mural on the YS News building, which pays homage to the late celebrated local writer Virginia Hamilton and her book “The People Could Fly.” She said H.U.M.A.N. began planning a Juneteenth celebration in February, but after Nagley’s nearby George Floyd mural was vanadalized in March, Nagley approached her about celebrating the completion of the Hamilton mural in a distinct, visible way.

“He said, ‘I just want to have a barbecue with friends, and bands could come out and play,’” Lee said. “Fast forward a few months, and he’s just finished up the mural, and so the timing is perfect to celebrate both of these things.”

True to Nagley’s idea, the CommuniQ celebration will include music from Mojo Power, DJ Don Johnson and hip hop artist Fyah Ball. Nagley will speak about the Hamilton mural and another recently completed mural located in Kieth’s Alley, “Tarot of America,” which Nagley created with fellow artist Lindsay Burke. Lee will also present an overview on the historical background of Juneteenth. A barbecue is also planned, with food cooked by Lee, which will be free to the community and will feature both vegan and vegetarian options.

Lee said that the free food is in service to a desire to make the event accessible and enjoyable for anyone who wants to attend.

“I remember being a single mom and wanting to attend things — we could participate, but we weren’t going to be able to purchase food,” she said. “It’s important to [H.U.M.A.N.’s] mission that we are 100% inclusive.”

A similar notion went into the decision to hold the celebration at Beatty Hughes Park; in addition to its nearness to the murals, the park is centrally located downtown, Lee said — and also holds a certain nostalgia for many longtime villagers.

“It’s where a lot of us spent so much time when we were younger — we would meet up there after movies at the Little Art, or on our way to the Glen,” Lee said. “It was the spot.”

Meanwhile, representatives from Central Chapel and First Baptist churches have been meeting virtually with Stokes and others each week as the YS Juneteenth Committee to plan another event to be held in Gaunt Park. Stokes said that, as the person who initiated the Village resolution to mark Juneteenth as an official holiday, he felt it was important that he help initiate a substantial, visible celebration of the holiday this year, and that including the input of the churches who initiated the village’s first regular Juneteenth events was part of that.

“It’s not so much a new event as a coming together of other, smaller events that would have happened separately,” he said.

The event will be held from 11 a.m. to 3 p.m. on June 19, with the Rev. Morne E. Meyer of Central Chapel serving as emcee of the event.  The Rev. William Randolph will give an opening prayer following an African invocation from villager Gyamfi Gyamerah. An historical overview of Juneteenth will be presented by Randolph and Gyamerah, as well as Kevin McGruder, who was instrumental in launching the original Juneteenth celebration in 2013. The event will also include music from the World House Choir, a poetry reading from the Young People of Color group and a dramatic performance.

There will also be a book giveaway for kids, sponsored by the YS Library, featuring books by Black authors. Food will be available from Courtlands Mobile Grill, a Dayton-based food truck that offers chicken wings, fish, burgers and more, with vegetarian options  available. Those attending are encouraged to bring their own blankets and chairs for seating. ADA-compliant portable toilets will be available on the site.

Juneteenth didn’t go unrecognized last year — even deep in the midst of the pandemic, the village’s historically Black churches teamed up to host a panel discussion, “What Does Juneteenth Mean to Us Today?” The talk was — as so many things were at the time — hosted online via Zoom. This summer, however, as more and more people are venturing into public spaces following vaccination, Stokes said he hopes for a healthy community response to the upcoming events — which he thinks are particularly important after more than a year of relative isolation.

“Last year we were thwarted because of the pandemic, but we have the opportunity to come together,” he said. “There will be some educational components [to the events], but really this is a celebration — of Black people and people of color, freedom from the pandemic, and an acknowledgment of keeping hope alive.”

Lee expressed a similar sentiment, saying that, although she will be sharing some historical information at CommuniQ, it’s intended to be “more celebration than education.”

“Is there any better way to celebrate than music, art and a barbecue with friends?” she said.

Stokes also acknowledged that the impulse to aim high to make up for the pandemic might mean that this year’s Juneteenth events are “the big ones,” but that he hopes this year’s momentum will propel the events forward into future years, allowing them to get bigger and better.

“I really hope these things take on a life of their own and continue to get bigger and better,” he said.

As far as H.U.M.A.N. is concerned, Lee said, CommuniQ aims to be the first of many more to come in the months and years; the group plans to focus not only on Juneteenth, but on a variety of social justice issues.

“We want to do something like [Juneteenth] annually,” she said, “but we also want to have other events throughout the year that focus on telling the stories of people from marginalized groups that people in this town may not be exposed to.”

In a similar vein, Stokes said he hopes that continuing to observe and examine the history of Juneteenth — which is underscored by the fact that enslaved Black Americans in Texas were intentionally kept ignorant of their freedom by the white people who profited from slavery — will have longterm effects over the years and aid in incremental understanding of racism as a whole.

“For something like [racism] to change, it’s like struggling to change the direction of a behemoth ship,” he said. “So come out and just take a moment, acknowledge and be an ally.”

CommuniQ will be held Saturday, June 19, 2–4 p.m., in Beatty Hughes Park. All are welcome and food will be offered free of charge.