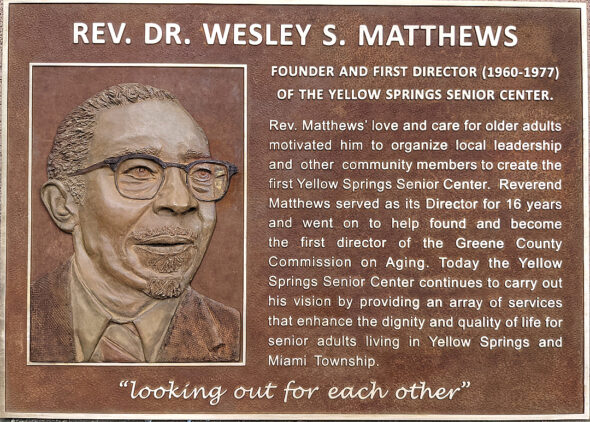 An image of the bronze plaque honoring the founder and first director of the Yellow Springs Senior Center, the Rev. Dr. Wesley S. Matthews. The plaque will be installed on the Center’s front wall this summer. (Submitted photo)

“Provide comprehensive services to the senior citizens of Yellow Springs and Miami Township and help the elderly residents of our community preserve their dignity and provide the means of enhancing a feeling of self-worth.”

This goal, one in a list of five, was enacted when the Yellow Springs Senior Center was first opened in 1960 in the building currently housing the Emporium by the center’s founder and first director, the Rev. Wesley A. Matthews. According to the Blacks in Yellow Springs Encyclopedia, the center became a national model for establishing senior centers in small communities. Now located next door at 227 Xenia Ave., the center has been offering a wide range of senior programming and support ever since.

The Rev. Matthews’ contributions and legacy were honored in a virtual program Thursday, June 24, by the Senior Center. Matthews’ family, center members, villagers and community organization representatives gathered to honor his contributions both to the center and to the village. To commemorate his life, a plaque bearing his likeness from a photo selected by his family, was commissioned, and will be installed on the front wall of the center.

During his life, the Rev. Matthews established institutions that improved people’s lives and strengthened communities through education, recreation, and social services, according to information presented at the meeting. He was the center’s director for 17 years until he retired in 1977 for health reasons. Matthews died in 1979.

During the program, Matthews was described by his daughter Westina Matthews Shatteen as an “energetic visionary who spent his lifetime in service.” Program highlights included comments from Shatteen on behalf of the Matthews family, the Rev. Morné E. Meyer of Central Chapel AME Church and John Gudgel representing The 365 Project. Rounding out the program was Kevin McGruder on behalf of both Central Chapel and The 365 Project, and this News reporter for the Village Arts and Culture Commission.

To bring attention to his life and contributions, villagers Katie Egart, Cathy Hill, and Karen McKee formed a small committee and met via Zoom for 15 months, poring over archives and gathering community support. Having served on the Senior Center Board at one time, Egart was surprised she didn’t know about Rev. Matthews.

“After talking with Karen, she said that definitely his name is being forgotten,” Egart said.

“Reverend Matthews did all this for the senior center, which is such an important institution in our town. It’s right in the center of town, and it means so much to many residents,” Egart explained in a recent interview with the News.

The committee received enthusiastic support from the Senior Center board, and Central Chapel AME Church, where Matthews once pastored. There was strong village encouragement from local organizations, including The 365 Project, Village Arts and Culture Commission and The James A. McKee Association. Financial support came with a grant for $5,000 from the Yellow Springs Community Foundation through their Giving Tuesday drive in 2020 and fundraising by the Senior Center, ensuring the creation of the commemorative plaque.

According to Egart, the committee “envisioned that there should be something on the outside of the Senior Center.” They wanted it to complement the Virginia Hamilton historical marker in front of the library and the Wheeling Gaunt sculpture that is also nearing completion and will be installed later this year near the train station.

“Yellow Springs has a rich Black History,” Egart said. “[Matthews’] ideas and original visualization for the senior center were so central to this current form of the organization that the history should be more widely known.”

The committee believed that the Matthews plaque should be “a beautiful work of public art as well as informational,” Egart added. Villager Brian Maughan was slated to be the sculptor when he unexpectedly died last year. Fortunately, the committee was able to find an artist to complete the relief at the foundry that Maughan had recommended. The plaque was completed just one day before the Matthews tribute, but the plan is to install it on the front wall of the center later this summer.

Committee member Cathy Hill is also glad Matthews is being remembered in other ways. In a recent conversation with the News, Hill said that she’s glad for the Blacks in Yellow Springs tours through which The 365 Project trains young people as tour guides. In-person tours were discontinued during the COVID-19 pandemic but are expected to resume soon.

“People move here, and they don’t know the history at all,” Hill said.

For Egart, her connection to the Matthews family is almost “karmic,” she said. The home she purchased in 1990 used to be the Matthews family residence, and Pat Matthews used to visit with Egart from time to time in her former home. The Matthews family purchased the Pleasant Street home from former YS News employee Eleanor Switzer in the 1960s, becoming one of the first Black families to integrate the north end of Yellow Springs, according to John Gudgel at the event. The Matthews had five children, four daughters and a son. Unbeknownst to Egart, a Chicago native, one of their daughters, Westina Matthews Shatteen, was Egart’s residential assistant in her dorm during her freshman year at the University of Dayton in 1969. Egart saw Shateen for the first time in 50 years during the program last week. 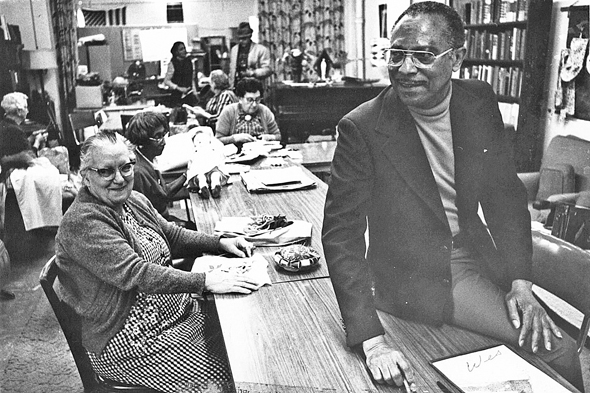 The Rev. Wesley Matthews founded the Yellow Springs Senior Center in 1959. He was the center’s director for 17 years until he retired in 1977 for health reasons. Matthews died in 1979. (News archive photo)

Who was the Rev. Wesley Matthews?

Born in 1914 in Cartersville, Ga., the Rev. Matthews first came to the area as a college student. He attended Wilberforce University where he met his soon-to-be wife, Pat Fields, who worked for the Yellow Springs News as a reporter and columnist from the 1940s through the ’70s.

Soon after graduating from Wilberforce, Matthews worked for the Dayton area YMCA in the 1930s. According to Shatteen,  her father was “one of the first Black recreation directors in Dayton.” Archival documents housed at Wright State University point to Matthews’ efforts to help integrate the Dayton area YMCAs in the 1930s. And according to former YS News Editor Kieth A. Howard, it was also during that time that Matthews became aware of the need to support older residents. Howard wrote, in a tribute to Rev. Matthews shortly after his death, that Matthews realized the importance of “recreational programs for elder citizens.”

This realization that occurred early in Matthews’ life later became a physical reality through the founding of the Yellow Springs Senior Center. Shatteen said her father “ground wheat and flour for sale” and established a thrift shop primarily from clothing donations from Antioch College students to raise money for the Center.

Matthews, who was born into a family of ministers, also attended Payne Theological Seminary in Wilberforce. He came to Yellow Springs in 1949 as a student pastor assigned to Central Chapel AME church, where he quickly got to work, transforming an abandoned lot near the church into a neighborhood playground, establishing a mentoring program for young boys and founding an integrated community recreation center called the High Street Community Center.

Matthews also pastored AME churches in Chillicothe, Urbana and Springfield over the course of his career, establishing recreation centers in the communities where he worked. In addition to founding the Yellow Springs Senior Center, he also helped establish the Greene County Commission on Aging in the 1970s.

According to Shatteen, one of his proudest moments was receiving an honorary doctorate at Monrovia University in Liberia, a country founded by formerly enslaved people from the United States.

Although it is clear that the Matthews’ contributions to Yellow Springs are weighted in the practice of community engagement, education and activism, Kevin McGruder of The 365 Project added another important element to the mix, saying that Matthews’ ideals reflect that of a concept called “‘social gospel,’ when religious institutions see they have a responsibility to improve the community,” he said.

“Enrichment program for boys, High Street Community Center – [Matthews had a] clear understanding that the church had a responsibility to improve the community, but that the community was broader than that,” McGruder explained.

He also contextualized Matthews’ influence on Central Chapel in current times within the social gospel context, saying, “Dr. Matthews is an inspiration to us in 2021.” And a question for the AME church according to McGruder is, “how do we continue to contribute to this community?”

“A couple of years ago, we had a free clinic [at Central Chapel]. That was in the spirit of the work that Reverend Matthews was doing. We are going to be reopening soon after a year of being closed. We are in conversation now about how do we continue to meet that charge and that inspiration?” McGruder said during the program.

McGruder also reminded the audience that Yellow Springs was once a segregated community, and that it is “important to acknowledge that history so we can see where we move forward.” In 1949, Matthews and his wife, Pat, led a sit-in to desegregate the Little Theatre, now known as the Little Art Theatre.

“Little Art Theater had a rope at the back of the theater, and Black people had to sit behind that rope. They have a plaque acknowledging the event that Reverend Matthews was involved with that led to its integration,” McGruder said.

Matthews also integrated Central Chapel AME church, according to Gudgel. Gudgel was adamant that, “acknowledging the life and achievements of Dr. Matthews is long overdue recognition for a person who did many firsts.”

The Matthews family also worked to ensure that the legacy of Wheeling Gaunt remained strong. Gaunt Park, willed to the village by Gaunt, had evolved from farmland to the town dump. According to Gudgel, the village, “in part through efforts by Rev. Matthews and his wife, Pat, were able to remove the dump, and they were influential in the construction of the pool and sports fields.”

The Rev. Matthews plaque committee was also grateful for the assistance provided by The 365 Project in supporting their efforts to bring more public awareness to Matthews’ legacy, and that of other Black villagers by recentering Black history in the community.

“We often say Yellow Springs is this groovy place because of Antioch College,” Egart said, “but I think that recentering what Black citizens in Yellow Springs created in this town, the groove that we love in this community is its best manifestation.”

An exhibit featuring the contributions of the Rev. Matthews is currently on display at the Yellow Springs library through July 11. The News will inform the community when the plaque is installed at the Senior Center.

One Response to “YS Senior Center founder to be memorialized — Plaque to honor Rev. Dr. Matthews”