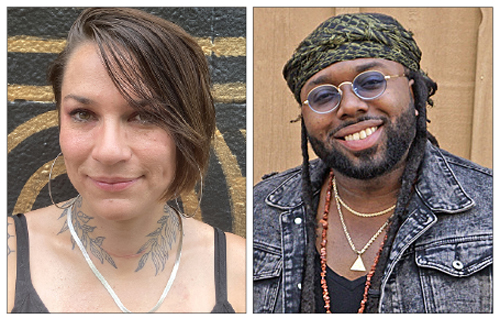 This is the first part of a continuing series on candidates for Village Council, Yellow Springs school board and Miami Township Township Trustees.

Seven villagers are looking for votes to fill three contested Council seats in the upcoming November election. This week, the News will spotlight two first-time candidates, Linsday Burke and Issa Walker, who answered questions from the News in emailed responses.

The remaining five candidates will be featured in upcoming issues of the News.

Lindsay Burke, 35, has lived in the village for the past 10 years. She is mother to Logan, who attends Mills Lawn School. During her time in the village, Burke has worked in the community as a restaurant server, house cleaner, piano instructor and childcare provider. She is co-owner of Yellow Springs INK Art, a tattoo and art studio, and is a member of Yellow Springs Downtown Merchants, a recently formed group with the mission of serving the interests of businesses within the village.

“As a young person, I came to Yellow Springs to appreciate art, nature, and cultural content that was different from the surrounding areas,” Burke wrote. “I came to love it for many reasons, the greatest of which is the comfort and connection I feel through relationships I have built with many villagers over the years.”

While living in the village, Burke has served on several nonprofit boards and commissions, including the Human Relations Commission and the Feminist Health Fund, where she served as vice president for two years. Burke has also been a part of community organizations such as The H.U.M.A.N project, or Help Us Make A Nation, and Village Assistance Network, which coordinates bill assistance for struggling villagers.

Asked why she is running for office, Burke responded that she wants to see broader representation on Village Council.

“This moment is an important one to affirm a diversity of voices in village governance, and I am committed to proactively facilitating that representation,” Burke wrote.

If elected to Village Council, Burke wants to advocate for changes that encourage diversity and economic stability.

“Undoubtedly, Yellow Springs will be experiencing a number of significant changes in the coming years,” Burke wrote. “My primary goal will be to see that through those changes we increasingly place our highest value on that which sets us apart and connects us to the best parts of ourselves and our history.”

In addition, Burke would like to help foster cooperative relationships between village government, businesses and residents.

“I want to create opportunities for more transparency and greater participation in these decisions that will ultimately shape the future of this village,” Burke wrote.

Asked about managing the workload of being a Council member, Burke said she is committed to serving the village’s best interests.

“I am in a fairly unique position to be able to give my time and attention to this important public service role because my profession allows me to make time for the other things I care about,” Burke wrote.

Walker has held various jobs in the village, most recently at Antioch College’s Wellness Center as a personal trainer prior to the center’s closure in 2020. Walker is also a hip-hop artist, having appearances on the “Sway in the Morning” radio show and at “Gem City Shine,” a benefit hosted by Dave Chappelle after a mass shooting in Dayton’s Oregon District.

Walker contended that the nature of his work as an independent contractor gives him the ability to dedicate the time needed to be an effective Council member. He also considers his candidacy to be a way to embrace the community that shaped him throughout his formative years.

“What I’ve always loved about Yellow Springs was the diversity in culture, great education and an overall safe space for people to feel free to express themselves and their art,” Walker wrote.

“There is a reason why extraordinary people come from this place, and I want to help preserve that culture and contribute to its future growth.”

Asked about his prior experience, he shared that he was temporarily involved with Young People of Color, a local organization focusing on diversity. Although this is his first time running for public office, he believes that serving the community in this capacity is important. He went on to write that he wants to be a part of ongoing change and economic development in the village.

“I attribute a lot of my success to the relationships and opportunities this town has allowed me to cultivate,” Walker wrote. “My interests lie in making culture the economic currency of Yellow Springs and I want to focus and contribute to that aspect of village life. I also want to make the village affordable for a diverse population that includes the people who make up the fabric of the community.”

In considering a question from the News about where he feels he would be most effective as a liaison to the Village Council’s commissions, Walker wrote that he wants to be a representative for young people of color.

“As a young Black man, I feel very connected to the youth culture and wish to give them a much-needed voice.”

One Response to “2021 Local Election: Burke and Walker vie for Council”