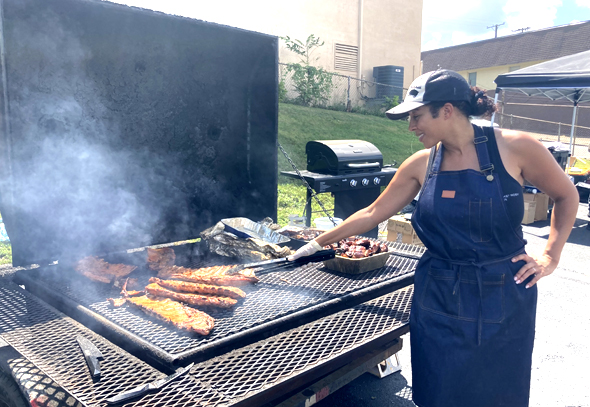 Welcome to the barbecue pit, where the fire is hot and gives everything a smoky savor. This is where villager Erica Roby has found her calling; and there, she is called “Master of ’Cue.”

But that’s not what Roby thought would be the outcome of a competition so early in her career as a pitmaster. In a recent phone interview, Roby detailed the rollercoaster of events that led her to changing her career, moving from California to Yellow Springs, and becoming Master of ’Cue as the winner of Food Network’s “BBQ Brawl” competition.

“I originally studied law to become a criminal defense attorney,” Roby said. “It wasn’t for me, so in California, I decided to go to school to become a sommelier.”

As a sommelier, or wine steward, Roby learned the nuances of wine and worked closely with chefs to pair wines with offerings from the kitchen. Her work as a sommelier reawakened her love for the kitchen — a love that began in her family’s home in Dayton, Ohio.

“When I was a kid, my dad included me in the cooking process,” Roby said. “We would go shopping for herbs in Yellow Springs when we visited my Aunt Carolyn’s home in the village, and dad would let me pick spices that I wanted to cook with.”

Roby’s relationship with her father and cooking sparked an idea: a family barbecue business.

“I was ready to come back to Ohio; I had a young son and needed a support system,” Roby said. “I talked with my dad who was looking to retire, and we decided to start a food truck.”

Not long after that conversation, Roby bought a house in Yellow Springs, then set out to convince her husband it was the right move.

Back in Ohio, Roby and her father were eager to pursue their dream. But before building the truck, Roby wanted to hone her skills. To do that, Roby attended two barbecue schools: Harry Soo’s, in California, and Myron Mixon’s, in Georgia. While in attendance, Roby learned about the competition circuit, and decided to enter a contest.

“When Myron asked me to compete in Memphis in May, I didn’t know it was a grand champion competition,” Roby said. “I got one of 30 amatuer spots.”

According to Roby, anyone who knows barbecue knows that a pitmaster must have a name. She and her family found inspiration in music.

“A Dolly Parton song came on, and we heard the words ‘blue smoke,’” Roby said. My name is Blaire, so we put it together and I became Blue Smoke Blaire. The first time I said it out loud, it felt like I was breathing life into something.”

After the competition, Roby received a message through Instagram from a casting director for the Food Network.

“I thought it was fake,” Roby said.

Her response started a whirlwind of activity — she did interviews and food auditions, sourcing food from area stores.

“We got food from all over. I would hit four to five stores looking for the right ingredients. Tom’s Market, Jungle Jim’s — anyplace I could find really good ingredients,” Roby said.

For a year after the audition, Roby didn’t hear anything. Then, in January of 2021, she got a call telling her to get on a flight to Austin, Texas. That flight led her to a Food Network set, complete with buildings restored to look like a town from a Western film and the Food Network clock.

Describing her first days on set, Roby said it was unreal.

“It was like my soul left my body,” she said. “I don’t even remember what I cooked.”

Making it onto the show, Roby said her initial goal was to “not go home first.” After a few weeks, though, she felt a little more confident, and continued to listen to her mentor, chef and Food Network star Bobby Flay.

“He told me, ‘You wouldn’t be here if you couldn’t cook. Go ahead and swing,’ and that’s just what I did,” Roby said. “I cooked what I knew.”

Roby also drew on her training as a sommelier, where she learned how to taste wine and break it down into its basic elements.

“You can’t have written recipes on Food Network,” Roby explained. “I was able to shave off seconds by tasting and smelling in order to know what was missing. That skill helped me become a champion.” 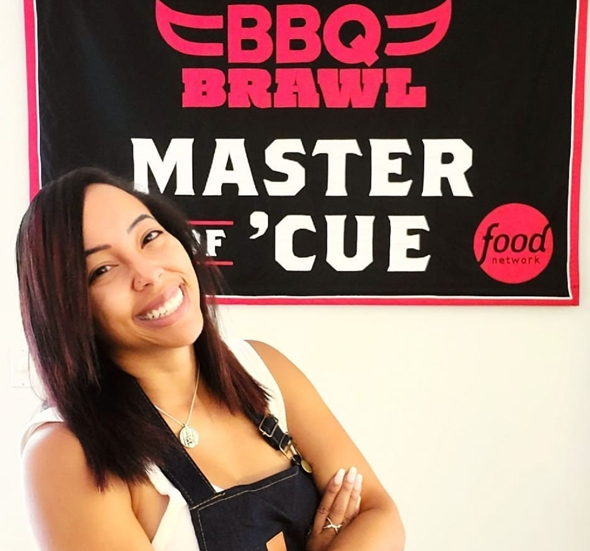 Since being crowned Master of ’Cue, Roby plans to focus on her food truck, which will primarily be located in the Dayton region.

“I would love to bring my food truck to the Yellow Springs community,” Roby said. “I’ve been in touch with Yellow Springs Brewery, and I am looking for other possible partnerships.”

Roby says that she is excited to bring her expertise to the Dayton region, and although she loves to cook ribs, she has been researching cooking methods so that she can offer vegetarian, gluten-free and vegan options.

“I want to be versatile and for everyone to know that barbecue is for them,” Roby said. “But I do have some staples — cajun chicken, ribs and mac and cheese — that will always be on the menu.

Asked about her kitchen essentials, she said that she loves being versatile, but her favorite herb is sassafras.

“A lot of people use it as a thickening agent, but I like to roast it for chicken and fish,” Roby said. “I smell it and just know whatever I’m using it for is going to taste good.”

She also reflected on her place as a Black woman in the world of barbecue, a tradition that she says is overlooked.

“My great-grandmother was a pitmaster before anyone called it that,” Roby said. “I want young Black girls to see me and know they can do what I’m doing, and I want to preserve the history of the pit.”

While her food truck is under construction, Roby is conducting interviews with pitmasters across the country for her digital series “Behind the Pit,” which is featured on her Instagram page.

“I get to taste the most amazing food and hear these phenomenal stories,” she said. “Storytelling is such an important part of BBQ tradition.”

Additionally, she is hosting pop-up events at her father’s business property. These events are planned as a thank you to the people who supported her on her journey to a win on “BBQ Brawl.”

“I would see the messages of support and it really kept me going. So now, I want to give back to my community,” Roby said.

The first of these events, held Aug. 28, drew supporters from Etna, Ohio, which is east of Columbus.

Roby is also excited to spend more time in her Yellow Springs home, where she will continue to hone her skills and spend time with her young son, Austin.

“I am a student of barbecue, but I think it is very important to help the next generation,” Roby said.

“That would be the biggest injustice — to keep the knowledge for yourself. You’re not a master of anything if you do it by keeping other people down.”