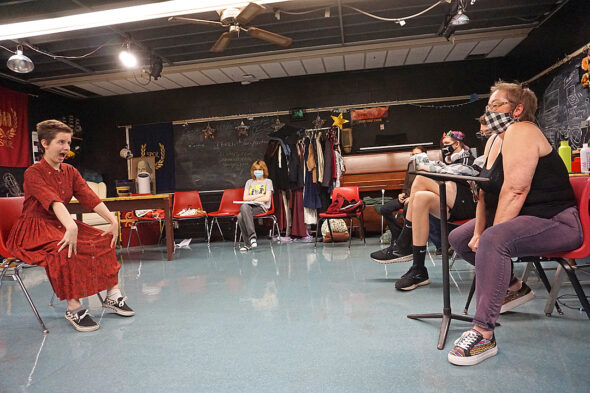 YSHS student and actor Vera Roberts is pictured rehearsing the monologue “French Fries,” which is one of 10 such pieces featured in Jane Martin’s play “Talking With…” The play will be performed Friday, Saturday and Sunday, Sept. 24–26, in the Agraria barn. (Photo by Lauren "Chuck" Shows)

The halls of YS High School were relatively quiet on a recent Friday afternoon, with the majority of its students headed home and into the weekend. The performing arts room, by contrast, was buzzing with movement, as some students stretched and shook out their limbs, while others tried on costumes and placed props. One strapped on a faux, cloth belly.

This particular rehearsal was one of few that the entire cast have had together: the show comprises a series of monologues, and the cast of 10 have mostly rehearsed one-on-one with director and performing arts teacher Lorrie Sparrow-Knapp. This was new for the young actors, who are used to the communal nature of ensemble rehearsal.

“It was definitely more intimate, like you’d expect — a lot more emotional,” said Eve Diamond, who performs the monologue “Dragons,” in which her character is in the middle of giving birth.
Diamond added: “Working one-on-one, your guard is down more than it would be with other people there.”

Each monologue in “Talking With…” is given by a different character, and the individual pieces that make up the show range from comedic to dramatic — sometimes both. In “15 Minutes,” Olive Cooper portrays a vulnerable actor ruminating on the challenges of being an artist in the raw final moments before going on stage. In “French Fries,” Vera Roberts animatedly explains why she wants to live in a McDonald’s.

“All of these pieces explore the concept of what we believe,” Sparrow-Knapp said. “It’s a very intimate show, and the audience is very much a part of this show — the characters are ‘talking with’ the audience.”

Sparrow-Knapp said the range of monologues, each of which are about 10 minutes long, have allowed the burgeoning actors to work on honing the skills they’ve developed over their years under her care — particularly those actors who have never taken on a starring role.

“Each of these young people is being challenged and highlighted — they all deserve their own star vehicle,” Sparrow-Knapp said. “There’s an edge to these pieces, but instead of cutting themselves on that edge, they skate upon it.”

To add even more edge, two of the production’s monologues include live animals: “Handler,” performed by Kinu Shope, features a snake, and Sophia Lawson shares the stage with a cat in “Audition.”

“It’s more difficult than you’d expect,” Lawson said, commenting on her feline co-star. “If [the cat] gets squirmy, you can space out very easily and lose little bits of the monologue.”

All of the characters in “Talking With…” are presented as women in the text of the play — a facet Sparrow-Knapp said she finds interesting considering the shrouded nature of the identity of the show’s playwright. Jane Martin is a pseudonym, and though theories have been postulated about the playwright’s identity over the years, it has never been revealed.

She added that, despite the characters’ textual depiction as women, the casting of the play was open to all genders. A consideration of the complexities of gender, and how it’s presented and represented, has been part of the artistic process for the young actors — particularly those who don’t identify as women.

“I think my character, who’s a cowgirl, is the furthest thing from me that could be — but I find her so familiar,” said Kirby Kingsley, who uses he/they pronouns. “Even though it’s been hard, it’s really nice that I’ve been able to get into [character].”

Milo Strolger, who is transgender and uses he/they pronouns, agreed with Kingsley, and said the decision to play a character written as a woman was difficult and personal.

“I had to ask myself, ‘Am I comfortable with this? Is the script super into femininity?’” Strolger said. “But I think even though the character is a feminine person, [my monologue] is not really about identity, but the character’s interests and their mind.”

Though the challenging nature of the material was one impetus for staging “Talking With…,” Sparrow-Knapp said another consideration was maintaining safety during the ongoing pandemic.

She cast the play at the end of the previous school year, which allowed the actors more time to prepare for their fall roles on their own rather than in ensemble. By design, the play allows for only one unmasked actor on stage at a time; all other actors will be masked when not on stage. All audience members will also be required to wear masks for the duration of the performances.

“No chin diapers,” Sparrow-Knapp said with a laugh. “You have to have the mask over your nose and mouth — the safety of our young people and our audiences is a priority.”

The play is being staged in the Agraria barn, where seating will be limited, so five performances have been slated. Because the barn is a nontraditional space, the play is being staged with minimal lighting, set design and sound design. Sparrow-Knapp said they are grateful to be able to use the barn, but that indoor performance spaces of any kind are a diminishing resource in the village.

“Artists in this town have done an astonishing job of creating viable theatrical art using nontraditional spaces — but many of those spaces are gone,” she said.

For the last several years, the schools — as well as such local performance groups as the YS Theater Company and World House Choir — have used the Foundry Theater at Antioch College as the de facto community performance space. Now, Sparrow-Knapp said, the black box theater is not available to YSHS — which she said she finds ­perplexing.

“A lot of time and money and goodwill have been put into that space,” she said, referencing the Foundry Theater’s 2013 renovation; half of that renovation was funded by the community, with the understanding that it would be a shared space between town and gown, according to a 2015 News report.

Sparrow-Knapp has long been vocal about the local need for adequate performance space, but no matter the venue, she said her young cast is ready to wow audiences.

“I think it’s time for a real performing arts space that can be worked with and shared across the community,” she said. ‘But for now, these are amazing young actors, and [‘Talking With…’] is going to be an amazing show.”

Performances are Friday, Sept. 24, at 7:30 p.m., and Saturday and Sunday, Sept. 25 and 26, at 2 and 7:30 p.m. in the Agraria barn. Tickets are $15 for general admission, $10 for seniors and $5 for students, and may be purchased in advance at showtix4u.com; a limited amount of tickets will be available at the door. Seating for each performance will be limited to 50.

Special parking information: Parking is extremely limited at Agraria, so YSHS is providing a shuttle from the high school to Agraria before the show and back after the show. The shuttle runs from 6:30 to 7:10 p.m. for evening performances and from 1 to 1:40 p.m. for matinees. Those planning to attend should keep this in mind to ensure on-time arrival.