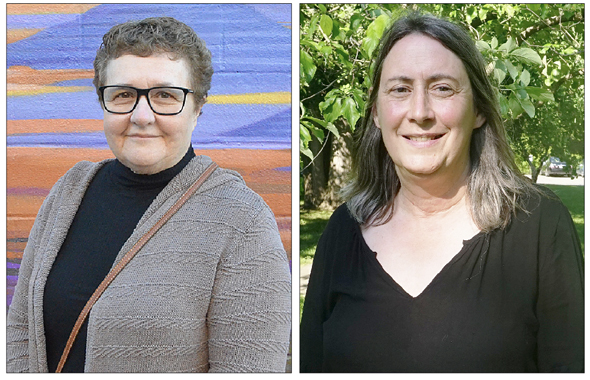 This is the fourth part of a continuing series on candidates for Village Council, Yellow Springs school board and Miami Township Trustees.

Four Miami Township residents are looking for votes to fill two Township seats in the upcoming November election. This week, the News will feature profiles of two of the three nonincumbent candidates, Denise Swinger and Marilan Moir.

For Denise Swinger, 63, the road to becoming a candidate for Miami Township trustee has involved some life twists and turns. She originally planned to use her degree in mass communication to pursue a career in radio and television production. However, after moving back to the Dayton area from Colorado to care for her ailing father, the Trotwood native found it difficult to break into the industry.

“I couldn’t really get into the markets here for the TV stations; what you really needed to be was a local intern to kind of get that foot in the door,” she said.

Instead, Swinger, who is the mother of three adult children ages 29, 26 and 23, took a different career path involving community service and volunteer management. She became the volunteer director for Hospice of Dayton, and then the city of Dayton’s first full-time volunteer coordinator for Dayton Volunteers. Swinger also worked as a branch manager for the United Way of Dayton.

Swinger’s life took another turn when she met her future husband, Joseph Giardullo, who was a professor in the nursing program at Sinclair Community College. When they were dating, Giardullo participated in a health project in Sierra Leone for the international organization Operation Crossroads Africa. His medical team provided vaccinations to residents. After returning from his overseas trip, Giardullo discovered that no team had been assigned to return to Africa to give critical booster shots and there were no plans to do so. He asked Swinger to help raise money to send him and another nurse back to the country to give the boosters. Out of that successful fundraising effort, the organization Society Taking Active Responsibility for International Self-Help, or STARFISH, was formed in 1987.

“We probably took 250 people from the Miami Valley area — pharmacists, nurses, educators, a couple of doctors, a surgeon, to Sierra Leone to do dual development,” Swinger said. “They did trainings with peers in their fields.”

STARFISH, incorporated in 1987, successfully operated internationally until a civil war that had been raging in neighboring Liberia spilled over into Sierra Leone in the early 1990s. The couple, along with their oldest daughter, who was just 2 years old at the time, had to evacuate from the country.

In an email follow-up with the News, Swinger said that the organization is still alive and well, but now serves the local community under the name Yellow Springs Emergency Assistance.

“Although the bulk of our funding goes to help people with utility disconnect notices, we also have paid [prescription] copays, rental assistance, car towing, auto mechanics services and other emergency services,” Swinger wrote. “So far in 2021, we’ve helped 33 people.”

Swinger moved to Yellow Springs with her family in 1993. She said they were looking for a place to live that matched their values.

“We loved our house [in Dayton], but it was sketchy where we were, and it was time to go,” she said. “Yellow Springs was more in line with how we lived our lives, and that’s how we ended up here.”

Hired by former Council representative Deborah Benning in 2001, Swinger began working for the Village in different capacities, initially hired to do contract work. Eventually, her role with the Village expanded under former Village Manager and current Village Council member Laura Curliss, when she became zoning administrator, a position she currently holds.

Swinger said she loves interacting with people in the community in her role as administrator.

“I meet people every day, citizens that come in [the office] that need assistance on a variety of things,” she said.

She said she decided to run for Miami Township trustee, in part, because of her love for public service.

“I started thinking about the fact that I’ve always been in public service, and I love it,” she said.
Swinger also mentioned the desire to transition into another community role.

“I don’t have a platform, I just thought, ‘You know, I am probably on the tail end of my time with the Village,’” she said.

She also believes her experience would help the Township achieve greater financial stability.

“I know a lot about the work that’s been done with the Miami Valley Regional Planning Commission, and I understand what the Township’s vision is,” Swinger said. “I want to keep it going and try to help them because they are hitting a financial wall.”

Considering the impending retirement of Miami Township Fire Chief Colin Altman, Swinger said she wants to address pay disparity, adding that it will be difficult to replace Altman on the currently offered salary.

“The salaries are just so out of whack with everyone else,” she said.

She also wants to see the Township receive more resources, particularly because of Yellow Springs’ economic role in the Township.

“Yellow Springs is a gem — [it] brings a lot of money into Greene County and we don’t get our fair share at all,” Swinger said.

Swinger stressed that she intends to listen to everyone in her capacity as trustee.

“I am always in the middle, always willing to listen to both sides,” she said. “I am not an agenda pusher; I don’t come in with a pet project that I want to see happen. I just try to find that middle ground to resolve the problem.”

Marilan Moir, 58, grew up in the suburbs of Cleveland.

Her degree in agriculture from The Ohio State University is, in part, what brought Moir into the area. She said she discovered Yellow Springs around 30 years ago through a visit and immediately asked herself, “How do I get there?”

“I hadn’t seen anything like it in my existence, so I came here intentionally,” Moir added.
Moir is married to Dawn Cooksey and has two grown children from a former marriage. Her daughter, Elizabeth, is an immigration attorney in the Boston area. Moir’s son, Evan, works in Taos Ski Valley in Taos, N.M. The couple also have a younger daughter, Lela, who attends Mills Lawn Elementary School, and a cat named Houdini.

After pursuing a master’s degree in education, Moir has been teaching life sciences in the Dayton school system for about 20 years. However, Moir plans to step away from teaching if elected Township trustee.

“I don’t think I could do both jobs justice, and there’s a lot of mixed feelings about that, a little bit of guilt, because of real relationships I have [in my current position],” Moir said.
Moir said she loves the beauty of the township area and finds peace there.

“When I go away and come back from work, I get inside the township and I relax,” she said.
Before deciding to run for trustee, Moir did her research, questioning her own willingness to step away from a career that she enjoyed and venturing into something different.

“Three people are going to be entrusted with the financial and physical well-being of a township,” Moir said.

As part of her decision-making process, Moir started attending trustee meetings at the beginning of the year. After starting out just observing the process, Moir became increasingly involved in the meetings.

As her participation has increased in the meetings, Moir said she has been met with some resistance from trustees and the staff, and she again emphasized public education.

“It’s not a case of playing gotcha … it’s more like when I started looking for information, I couldn’t find it. … It’s more than demanding transparency. I am saying I could take that piece of it. Elect me. I’m interested in how we get information out and what the public knows about the township,” she said.

Moir said that, if elected, she would like to see more transparency in sharing and disseminating Township information to the public.

“Immediately, I’d like to open it up, information-wise,” she said. “I’ve spoken openly about transparency, and I’m an educator. I’d like to educate the public and explain how this is working.”

She also plans to learn more about Township finances in order to ensure that the Township is making sound decisions with its money, and said she would like to explore innovative zoning practices.

Moir is aware that decision-making by rural residents impacts everyone in the township.

“We have to defend and stick up for the landowners of the township and understand them and understand their [need for] peace and quiet,” Moir said. “I am also aware that what they decide to do with their land is also going to affect us, whether it’s traffic patterns or having a big solar facility next to us.”

In a follow-up email to the News, Moir wrote that she also wants to improve relationships between the Township trustees and constituents, an issue which she said concerns her.

“I’m finding, in talking to constituents, that they seem somewhat estranged from Township business, and many don’t necessarily have good feelings toward the Township trustees at this point in time,” she wrote. “I see the need to repair that relationship.”