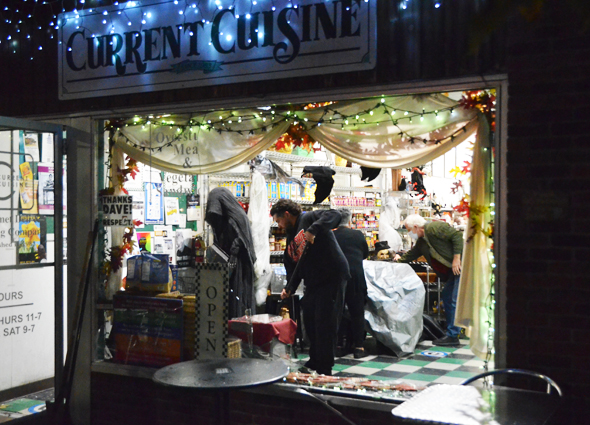 On Friday, Oct. 29, a deer went on a rampage in downtown Yellow Springs, causing damage to Current Cuisine and Dave Chappelle's 241 Xenia Ave. property. Here, Current Cuisine employees sweep up the broken glass after the business had been cleared of the deer. (Photo by Reilly Dixon)

Around that time, a rogue buck ran onto the porch of 241 Xenia Ave. and broke two windows, punctured several screens and overturned some patio furniture. The property is owned by local resident and comedian Dave Chappelle’s company, Iron Table Holdings LLC.

Seconds later, the deer went next door to Current Cuisine. Just 15 minutes before closing time, the deer crashed through the large front window next to the entrance and thrashed around the business.

According to Current Cuisine employees, the deer jumped around the main lobby for several seconds before sprinting behind the deli counter and running into the back kitchen. Employees led the deer out of the business through the back door into Kieth’s Alley.

No injuries have been reported and the deer remains at large.

“It was absolutely terrifying,” senior Current Cuisine employee Carra Spaugy told the News. “I’ve always been terrified of deer, so in a way, I feel validated now.”

According to Spaugy, the deer was a three- to four-point buck.

Once the premises had been cleared of the deer, all that remained was the damage done. Shards of glass were scattered inside and out of both locations. At Current Cuisine, several specks of deer blood were left behind. Scratch marks were etched in the plexiglass above the deli counter.

No significant damage was done to the kitchen or the back rooms of the deli.

According to Karyn Stillwell-Current, co-owner of Current Cuisine, passersby and witnesses to the deer drama quickly sprang into action to help with the cleanup.

“It was just an amazing response from everyone,” she said.

Volunteers swept up glass, comforted the shaken-up employees and helped hang a tarp where the front window had been.

Stillwell-Current told the News that Current Cuisine will still be open for business on Saturday, Oct. 30, 9 a.m.–7 p.m.

A fundraiser to help Current Cuisine’s owners replace the broken window has been established via GoFundMe; visit gofund.me/d1606ef8 for more information.

Correction: The initial report had stated the incident occurred at 7:45 p.m. The correct time was 6:45 p.m.