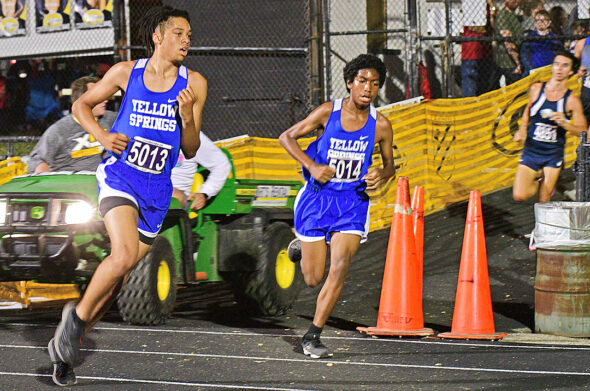 Malcolm Blunt, left, and Malik Booth ran on Oct. 2 at the “Saturday Night Lights” meet at Centerville High School. Nearly all of the boys squad ran season-best times as they finished in 29th place out of 36 teams and 267 runners from mainly Division I schools. (Photo by Kathleen Galarza)

The Yellow Springs Bulldogs varsity team bested their hosts, the Jackson Center Tigers, by a margin of 3–0 in a nonleague match on Tuesday, Sept. 28. Freshman Landon Harris and Junior Dylon Mapes each scored a goal, and junior Eli Eyrich racked up a third, as well as two assists. On the defensive side, junior Krishan Miller had two saves under his belt, aiding the team in the shut-out game.

Now sporting a 12–0 record, the Bulldogs headed to a Metro Buckeye league match against Dayton Christian on Tuesday, Oct. 5; a report on that match will appear in next week’s issue of the News.
—Metro Buckeye Sports statistics

The McKinney Middle School and Yellow Springs High School boys and girls cross-country teams competed in two different venues on Saturday, Oct. 2. The McKinney teams traveled to the Clark County Fairgrounds in Springfield, where they competed in the Jim Murray Invitational. The boys’ squad finished in 14th place out of 21 teams in a field dominated by Division I Schools — YS is a Division III school. The young Bulldogs were led by Kyle Johnston, who ran his second fastest time of the year (13:18) as he was complemented by a solid contingent of seventh graders — Will Oberg (15:13), Oskar Dennis (16:10), Charlie Carr (18:36) and Donovan Cooney (19:08) — who navigated the difficult two-mile course.

On the girls’ side, the all-eighth-grade squad of Sasi Drees-Johnson (15:41), Rebecca DeWine (18:25), Lauren Finney (20:03) and Hannah Finney (20:48) demonstrated toughness as three of the girls ran season best times against top flight competition.

The high school squads traveled to Centerville High School on Oct. 2 to compete in the “Saturday Night Lights” meet, which is fast becoming the largest high school cross-country meet in Ohio, and includes competitors from Indiana, Kentucky and Michigan. Running against the best of the best, Cheyan Sundell-Turner ran to a medal-earning second place finish, with a personal best time of 20:05. Fellow junior Josie DeWine stepped up to the competition in the field of 186 runners from 35 schools with a time of 24:40, while ninth grader Lydia Lackovich-Van Gorp completed the 5K run in a fine time of 27:34.

On the men’s side, nearly the entire squad ran season-best times as they finished in 29th place out of 36 teams and 267 runners from mainly Division I schools. Ninth graders Jia Sundell-Turner and Isaac Lewis led the Bulldog pack with identical times of 21:10. Sophomore Jack Horvath was close behind in a time of 21:18. Malcolm Blunt (24:20), Malik Booth (24:30), Kyle Raymer (26:42) and Evan Galarza (31:08) displayed the depth of the boys squad.
Coach Isabelle Dierauer complimented all of the Bulldog runners for their inspiring efforts, along with their mental preparation competing against top flight competition.
The Bulldogs will compete this Saturday at the Ambassador Classic located at Legacy Christian in Xenia.

The Bulldogs defeated the Ansonia Tigers 3–2 in a non league challenge on Saturday, Sept. 25 at home. Seniors Angie Smith and Aaliyah Longshaw led the team defensively with 20 kills and 22 digs from Smith and 10 kills and 28 digs from Longshaw. Junior Josephine Zinger continued to rack up assists for the team, with 40 over the course of the game.

The team went on to rout the visiting Legacy Christian Academy in a league match on Tuesday, Sept. 28, finishing with three points against the scoreless Knights.

Aaliyah Longshaw led the team in kills with 13, accompanied by nine kills from Smith, six from freshman Lacy Longshaw, five from junior Corinne Totty and one from freshman Adeline Zinger. Smith led with 20 digs, followed by 16 from Aaliyah Longshaw. Zinger’s assist count for the game was 32.

As of that game, the team’s record stood at 11–3; games against Southeastern Local on Oct. 4 and Middletown Christian on Oct. 5 will be reported in a future issue.
—Metro Buckeye Sports statistics