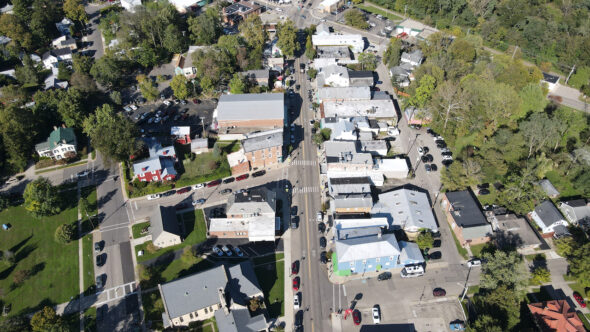 On Tuesday, Oct. 12, Planning Commission created a list of recommendations for Village Council to consider regarding downtown parking by a unanimous vote of 5–0.

The request was straightforward: move ahead with parking plans already on the books.

The response was equally direct. On Tuesday, Oct. 12, Planning Commission created a list of recommendations for Village Council to consider regarding downtown parking by a unanimous vote of 5–0. Commission Chair Frank Doden, Council liaison Laura Curliss, Stephen Green, Susan Stiles and Sarah Amend voted in favor of the following recommendations:

• No further parking studies be undertaken by the Village;• Parallel parking — but not angled parking — improvements be explored on Elm and Phillips streets;
• No parking fees be instituted by the Village for the downtown area;
• Council address outdated limited-hour parking signage around the downtown;
• Explore wayfinding technology and signage directing people to parking options;
• Village staff provide estimated budgets for each of the parking options mentioned in the parking plan.

The recommendations were made, in part, by a push from the Downtown Business Association, or DBA, representing a group of about 73 merchants.

The DBA recently wrote a letter to the Village asking that a second look be taken at parking plans that were cut from Yellow Springs Comprehensive Land Use Plan in 2020, after objections to a section of the plan that involved angled parking along Elm and Phillips streets. As tourism grows in Yellow Springs, so have concerns over parking for businesses and residents, especially for villagers who live near the downtown central business district.

The News is a part of the DBA, but does not have a position for or against future parking plans at this time.

In response to the letter, Village staff asked for Planning Commission’s input, to take another look at the parking plans that were stricken, and to make recommendations for further Village Council consideration. Renderings from the original plan were presented to the Commission, who did not debate the overall parking issues facing the village, but instead discussed the specific recommendations that should be made to Council. It was the Commission’s preference that they focus on existing plans rather than authorize another parking study with cost estimates between $25,000 to $50,000, depending on the detail. 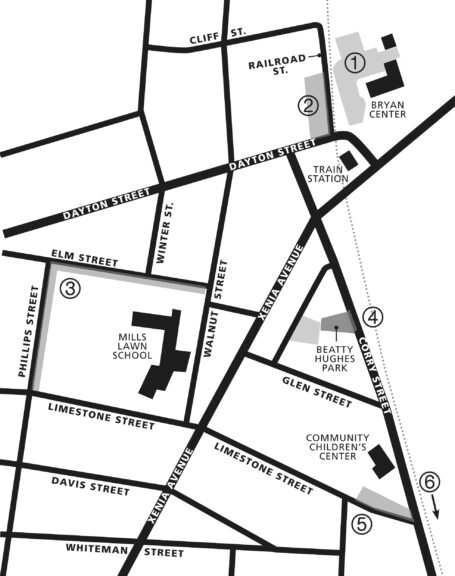 After community pushback on a 2019 Village proposal to turn Beatty Hughes Park into a downtown parking lot, the Village decided to explore further parking options, according to Swinger. She made suggestions of ways to improve on-street parking rather than create new lots, including: switching from parallel to angled parking; providing cutouts along Corry Street for visitors intending to use the bike trail; and adding a small parking area at the front of Beatty Hughes Park.

Other recommendations originally included in the land use plan were to utilize Village-owned property on Cemetery Street, a site that could accommodate 60 parking spaces, and along East North College Street, where angled parking was suggested. However, the entire parking portion was stricken because of controversy over angled parking along Elm and Phillips streets near Mills Lawn Elementary School.

“When [Council] did that vote, whether they realized it or not, they removed all of our parking plans, so Council is amenable to bringing [the parking discussion] back up,” Swinger said.
Most recently, 36 new spots were added to the parking arsenal when the Village created additional spots next to the Bryan Community Center by eliminating the tennis courts and moving the basketball courts back. According to Swinger, that parking is being used to capacity.
Curliss asked if the schools wanted the angled parking configuration shown in the plan on Walnut Street. According to Swinger, the Village would not pursue the Walnut Street configuration, despite the renderings in the Commission meeting packet.

Curliss also said it would be difficult to approve angled parking plans on Phillips and Elm streets.

“I have really paid attention to busy weekends in Yellow Springs, I have purposely gone over to Elm and Phillips to park. And let me tell you — there are ample unused parking spaces, even on the busiest, sunniest days. I think there are a lot of residents … who will say the same. There is simply no need for the Elm and Phillips streets nose-in parking,” Curliss said.

Swinger responded that she believes some improvement needs to happen, because she doesn’t think people are aware that parking is available there.

“There’s not any stripping or signage, and if we have wayfinding signs we might see a difference,” Swinger said.

Jamie Sharpe, representing the DBA and owner of the Yellow Springs Toy Company, said she was pleased to see that Planning Commission was continuing the conversation on traffic congestion and parking issues.

“I am relieved to hear you bring all of those ideas back to the table,” Sharpe said. “When we looked at the packet that [Village Manager Josué Salmerón] put out for the upcoming Village Council, those [parking plans] were not on it.”

Sharpe also said she was concerned that parking studies done in the past did not reflect merchants’ busy times throughout the year.

“I do about a quarter of my business from Black Friday to Christmas and then we’ve got all the activities that happen in the summer, and then we’ve got COVID, so counting [traffic] right now is not a good indication of what our needs are on a normal basis,” she said.

Sharpe also mentioned that the DBA also came up with an idea for a wayfinding app.

“I shared that idea with Josué, and then somehow paid parking came into it all. Unanimously, the DBA is very opposed to paid parking. We are an ecosystem that feeds off of each other, and rushing people out of town doesn’t serve any of us,” she said.

“[I am] dead-set against it. No reason for it. If there’s one thing that comes out of this recommendation tonight, that goes up to Council, there should be no paid parking,” he said.
DBA member and Village Council candidate Lindsay Burke reinforced the need for better signage.

“One thing that we run into over and again as business owners is that people don’t know where they can park and people don’t know where available parking spaces are, so if you are seeing vacancies around Mills Lawn, I would say what Jamie alluded to earlier is the wayfinding app, and better signage would be one fix for those problems,” she said.

Residents around Elm and Phillips streets sent a letter to the Commission opposing the angled parking plans. Those who attended the meeting all agreed that there was already ample parking that was unused, and saw no need for the additional spaces. Their overall concern was that the angled parking plans would change the character of the neighborhood and be a safety concern.

However, residents in attendance were open to improving signage.

Terry Smith, a Phillips Street resident and would-be neighbor to the nose-in parking voiced his concerns.

“I’ve heard comments tonight that this is a well-thought-out plan, but anyone who’s looked at the space knows that there are plenty of parking spaces, and I think that if we had signage that sent people over here they could use it. We’ve seen the space empty all year long,” said.

After creating and approving Commission recommendations, the next step is for Council to take them up in its legislative process.
​​

In other Commission business, Oct. 12:

The second lot behind the building used for parking is 6,534 square feet. The additional expansion of the patio would add 480 square feet to the current outdoor patio area according to the application.

Conditions were placed on the application that a seven- or eight-foot-tall fence be built to create privacy for property neighbors and to offset noise coming from the patio. The fence would be temporary because the village is working on a storm water project that would require uprooting a permanent fence. Once the project was completed, the bar would be required to install a permanent fence around the patio.

The entire parcel — including the property and the parking lot — is owned by Bob Baldwin and managed by his daughter, Kim Baldwin. All improvements and modifications to the lot and patio are under the purview of Gulch owner Edington, as well as all liability to person or property.

According to his application, Edington recently cleared vegetation at the rear of the property and created an additional eight parking spaces, bringing the total number of Gulch parking spots to 22. New gravel was added and graded to the back lot.

The application did have one objection from neighbor Kay Kittinger, citing noise as an issue. A letter written by Nancy Mellon and Steven Deal, whose backyard abuts the property, asked for resolution to issues related to standing water, as well as dumpster location and privacy. Kim Baldwin said during the meeting that they had met with Deal and Mellon, and most of the issues had been resolved before the meeting.

The next Planning Commission is scheduled Tuesday, Nov. 9, at 6 p.m., instead of the normal starting time of 7 p.m.. The change in time is due to a heavy agenda, including a hearing concerning the Oberer housing development.