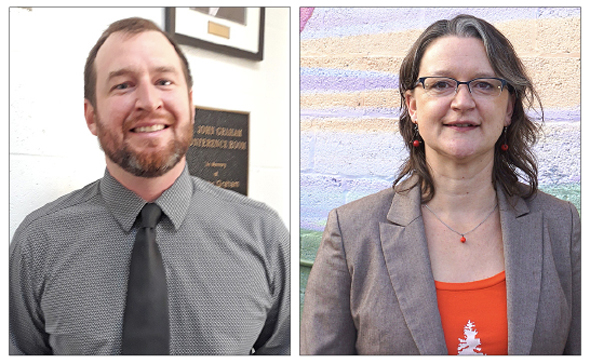 At a special school board meeting Tuesday, Nov. 22, the board approved Jacob “Jay” McGrath, left, to replace district Treasurer Tammy Emrick, who is retiring December 31. The board also named Luisa Bieri Rios to fill a board seat vacated by the resignation of Sylvia Ellison.

In a special meeting Tuesday morning, Nov. 22, the Yellow Springs school board approved the hiring of a new district treasurer and the appointment of a new board member.

Jacob “Jay” McGrath, who is coming to Yellow Springs from the Greeneview school district in Jamestown, will replace Treasurer Tammy Emrick after she retires Dec. 31; and Luisa Bieri Rios will fill the unexpired board term of Sylvia Ellison, who announced her immediate resignation Nov. 11 to take a job with the county board of health. The treasurer announced her retirement plans earlier this fall.

The two new appointments were each approved by votes of 3–0, with board member TJ Turner absent.

McGrath’s contracted term of service will begin Jan. 1. The board approved a “bridge contract” to take him through the current contract year, which ends July 31, 2022, as well as a subsequent three-year contract, extending from Aug. 1, 2022, through July 31, 2025. The board also approved an additional 10 days, between Nov. 24 and Dec. 31, at a per diem rate of about $440 a day, based on his starting salary of $115,000 a year. The annual rate will be prorated for the seven months of the bridge contract and then will increase to $117,300 at the start of the three-year contract, with a built-in raise of at least 2% each subsequent year. Fringe benefits include health insurance and retirement savings.

McGrath, who attended Tuesday morning’s meeting, thanked the board for the opportunity to work for the district.

“I can’t wait to get started here in Yellow Springs,” he said.

A resident of Centerville, McGrath has been Greeneview’s treasurer since March 2018. According to his LinkedIn profile, other job experience includes serving as a financial analyst for the Trotwood-Madison school district from 2013-2018 and working as an auditor for Plattenburg and Associates, a Cincinnati-based accounting firm, from 2010–2013.

District Superintendent Terri Holden said the district received seven applications for the treasurer’s job. The treasurer, like the superintendent, reports directly to the school board. The district paid the New Albany, Ohio-based K–12 Business Consulting firm $6,900 plus related mileage, to conduct the search.

Four people applied to fill Ellison’s unexpired board term, which ends Dec. 31, 2023, according to Holden.

Bieri Rios was a candidate for school board in the most recent election, Nov. 2., coming in fourth in the race to fill three open seats on the board. A faculty member at Antioch College, Bieri Rios was a strong supporter of the facilities levy, which was defeated in the same election by a 61%-39% margin. Her appointment is effective immediately.

Holden contract changes
During its most recent regular meeting Thursday, Nov. 11, the board approved modifications to Superintendent Holden’s current three-year contract, which concludes July 31, 2022, and amended a new five-year contract extending from Aug. 1, 2022, through July 31, 2027, which was originally approved Sept. 9 of this year.

The updated current contract also adds Juneteenth as an official holiday and offers the opportunity to exchange up to five days of unused vacation time for cash at the end of each contract year, a stipulation repeated in the five-year contract.

Changes to the five-year contract include raising Holden’s salary to $146,384 for 2022–23 and a guaranteed 2% increase each subsequent contract year.

Facilities levy statement
As part of her report Nov. 11, Holden read a personal statement in the wake of the Nov. 2 defeat of the district’s proposed combined property levy and income tax increase to build a new K-12 facility where the middle/high school campus currently sits on East Enon Road:

“Yellow Springs Schools are the heartbeat of the community. We cannot exist without broad community support,” the superintendent read. “While [the] election result is not the outcome we desired, the teachers, staff and administrators of Yellow Springs will continue to serve our children in the best way we can, as we do every single day. The defeat of the bond issue in no way changes the fact that our buildings are in serious need of either costly repairs or replacement, and their condition will not improve over time,” she continued.

“[Also on Nov. 2,] three new board members were elected,” Holden noted. “The task of addressing our significant facility needs will now fall to the new board. The board and I will engage in discussions to determine next steps to navigate the future of the district’s buildings. As we have in the past, we will continue to have open, honest and transparent conversations about our facility needs, the associated costs and the path forward.”

She concluded by thanking “parents and families and the larger community” for their support.

Lunch program
As part of its ongoing pandemic response, the federal government is for the second school year in a row funding free meals for all students. An understandable consequence of this action is that fewer families who would normally qualify for free or reduced-priced meals for their children are filling out the paperwork, Holden reported. This causes a problem for the district, however, in that the qualifying numbers are used to calculate other federal funding as well as discounts for technology purchases.

Holden said that typically, at this time of the year, the district serves about 180 to 190 participating students, including those who qualify at the Greene County Learning Center. As of Nov. 11, 137 students were signed up, she said. To help get a more accurate count of the schools’ economically disadvantaged population, the district is pressing for alternative counting methods while also upgrading the cafeteria system’s software to make the application process easier to navigate and revise.

Expanding substitute pool
Another challenge associated with the pandemic is finding enough substitutes for teachers and staff. The Ohio Department of Education, in recognition of the issue being experienced by school districts across the country, is permitting the temporary loosening of requirements for classroom subs.

At its Nov. 11 meeting, the school board approved allowing the district to hire substitute teachers for the current school year who do not hold a post-secondary degree, if they successfully complete a criminal background check and show evidence of a nonrenewable temporary substitute teaching license issued by the ODE.

A month earlier, the board increased the rate of pay for substitutes in various district jobs, with substitute teachers receiving $120 a day; secretaries and custodians at $14.63 an hour; aides at $12.38 an hour; and bus drivers at $16.88 an hour.

Emergency exercise
Holden reported that the district’s administrators had met with members of the Yellow Springs Police Department on Nov. 10 to plan “a full-scale emergency exercise,” including a police response, for Monday, Nov. 22. She said the state requires that every building in a school district, including the board office, conduct three kinds of emergency exercises over a three-year cycle.

“These are so critical because they allow us to see gaps in our safety procedures, so if there is a real emergency, we’re prepared,” Holden said.

Personnel
In personnel matters, high school intervention specialist Donna Haller has notified the district of her intention to retire at the end of the school year, and middle/high school office secretary Julie Spencer has announced her resignation effective Jan. 21, 2022.