The following is a breakdown of how voters cast their votes in each precinct of Yellow Springs and Miami Township. The Greene County Board of Elections released precinct details on Nov. 17, and votes were certified by the State of Ohio on Nov. 22.

Village Council
Of the seven candidates vying for seats on Yellow Springs Village Council, Kevin Stokes, Brian Housh and Carmen Brown, known locally as Carmen Lee, won seats. Stokes, who will resume his seat with a four-year term, led the race with 1,056 votes, or 22.23%, the highest number. Housh, who received 852 votes, or 17.94%, will serve another four-year term. Newcomer Lee won a two-year term with 745 votes, or 15.68%.

Lee is a lifelong villager who works as a caregiver for the elderly. In an September interview with the News, Lee said she was compelled to run so she could see someone on Council who looked like her — a Black woman living just above the federal poverty level. Lee’s campaign focused on listening to all voices within the community, addressing housing needs by looking at unused buildings, and working to find the balance between being a tourist destination and a community that meets the needs of all villagers. 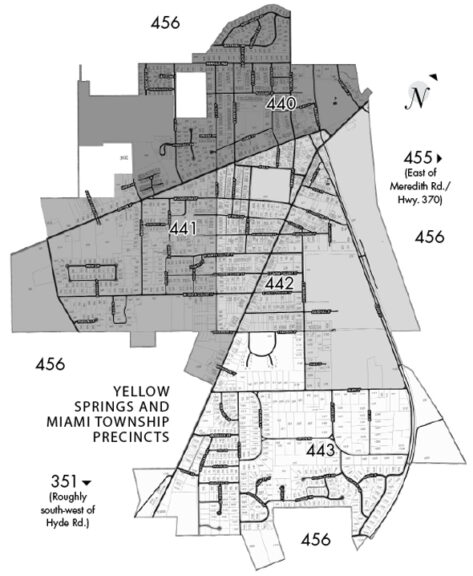 Stokes’ campaign focused on the needs for multifamily housing, infrastructure and “smart growth.” Stokes works as the senior director of facilities and technology at Antioch College.

Housh, who has served on Village Council for two four-year terms, is the Midwest policy manager for the Rails-to-Trails Conservancy office. His campaign focused on moving the Village forward by ensuring economic growth, developing strategies to increase affordable housing, and continuing to repair and develop infrastructure.

Mayor
Pam Conine won another four-year term as Yellow Springs Mayor in a race with no other contenders. She received 1,443 votes, with the most votes, 440, coming from precinct 440.

Yellow Springs School Board
The race for a seat on the Yellow Springs school board included five non incumbent candidates. The three winners, Judith Hempfling, Amy Magnus and Dorothée Bouquet, will serve four-year terms. Hempfling received the most votes with 1,199, or 22.5%. Magnus and Bouquet nearly tied, with Magnus receiving 1,094, or 20.5% and Bouquet receiving 1,073, or 20.1%.

Hempfling, who served 12 years on Village Council, is a nurse at Miami Valley hospital. Her campaign goals were to create an alternative to building new schools, create more transparency and dialogue between the school board and the community, and support students with diverse needs.

Magnus, a retired Air Force veteran and math and science educator, ran on a platform that supported finding an alternative to costly new buildings. She also focused her campaign on supporting STEM education and addressing learning gaps created by the COVID-19 pandemic.
Bouquet, a senior lecturer at Purdue University, campaigned on a platform that supported building a new K–12 school, increasing transparency between the school board and the community, and improving services for special needs students.

Yellow Springs school district income tax and bond issue #18
The proposed combined income and property tax was voted down with 821 votes or 38.9%, for the levy and 1,289 votes, or 61.09%, against the levy. The tax would have provided $35.6 million to build a new K–12 school, replacing the current elementary and middle/ high school buildings. While all precincts voted the measure down, precinct 455 had the closest vote, with 14 yes votes and 15 no votes.

Other candidates vying for the two seats were Dino Pallotta, who received 847 votes; Denise Swinger, who received 779 votes and Zo Van Eaton-Meister, who dropped out of the race in early October but still recieved 251 votes.

Issues that candidates discussed during the race were agritourism in the township and the future of Miami Township Fire-Rescue whose chief, Colin Altman, will retire in mid-July 2022 after more than 25 with the department.

Greene County voters passed Issue 2, which was a five year renewal levy for the construction, reconstruction, repair, resurfacing, or removal of bridges throughout Greene County. The rate for the tax is .25 mills, or $25 for each $100,000 of appraised valuation. Village voters passed the levy with 1474 votes, or 82.11%, for the levy, and 321 votes, or 17.88%, against the levy.

Precinct Issues
Precincts 440 and 443 approved two petitions for alcohol sales at Tuck N Red’s and the Yellow Springs Brewery’s Barrel Room. The petition for Tuck N Red’s, which passed 422 to 117, allows the distillery and winery to sell wine, mixed beverages, and spirits between the hours of 10 a.m. and midnight on Sundays.