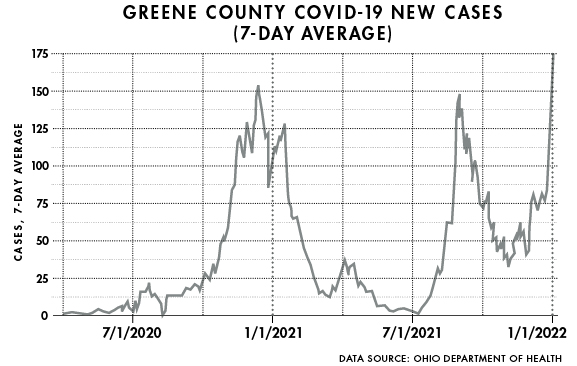 The seven-day average represents the average number of newly reported cases for seven days in a row. Although Greene County is currently in the lowest quartile among Ohio counties in new COVID-19 cases per 100,000, infection rates have climbed precipitously, surpassing both the December 2020 and November 2021 peaks.

The daily number of new COVID-19 cases seems to be exploding exponentially, with the Ohio Department of Health, or ODH, reporting historically high figures for the pandemic across the state over the past week.

Local numbers are up as well.

“We’ve definitely seeing an increase in the number of patients who have tested positive or suspect they have it,” Miami Township Fire-Rescue Chief Colin Altman said this week. He estimated that COVID-related calls are up 10–-15% over prior months.

At the same time, the number of deaths from the virus have not risen at the same rate as the positive case numbers, and those in Greene County have remained flat, suggesting either that deaths have yet to catch up with the latest surge in case numbers, or that current cases are not as severe, owing to vaccinations and the spread of the more contagious, but apparently milder, Omicron variant. According to the ODH, 95% of recent COVID-related deaths are among unvaccinated patients.

Comparatively, the seven-day running average —– which offers a more consistent snapshot of the current situation by averaging newly reported daily cases from seven days in a row —– reflects a steady rise in numbers since October, hitting 18,952 as of Monday, Jan. 3. The highest seven-day average during the December/January surge a year ago was 12,529.

A frequently consulted measure is new case numbers per 100,000 residents, which represents a two-week average. The ODH reports updated figures each Thursday, and the latest report from Dec. 30 shows a dramatic spike to a 1,364.7 average for the state, nearly doubling the number of 783.2, from two weeks prior.

The state reported 2,072 new COVID-19 hospital admissions for the week of Sunday, Dec. 26, through Saturday, Jan. 1, topping 6,000 total hospitalizations across Ohio as of Monday, Jan. 3.
Of those, more than 1,200 patients were in intensive care units and over 800 were on ventilators, similar to the week before. According to the ODH, COVID patients currently account for about 25% of all hospitalizations, nearly 30% of ICU patients and less than 17% of the state’s ventilator capacity.

Total deaths in the state have reached nearly 29,500 since the start of the pandemic. The week of Dec. 26 through Jan. 3 logged 727 new COVID-related deaths, compared to 692 the week before and 657 the week before that.

In response to hospital staffing shortages, Ohio Gov. Mike DeWine activated 1,050 National Guard members to assist in mid-December and another 1,250 members last week to assist. Medics and nurses will support clinical care, while other guard members will help with transporting patients, food service and administrative tasks, according to the governor’s office.

Chief Altman confirmed that area hospitals “are extremely overwhelmed,” noting a MTFR run to nearby Soin Medical Center one day last week found 54 patients —– not all COVID related —– waiting for a room in the emergency unit. He speculated that the beginning of flu season is also increasing the volume of patients seeking care.

Despite the increase in positive case numbers and patients seeking medical attention, hospital admissions in Greene County remained flat for the week of Dec. 26 through Jan. 1, with 16 new admissions, compared to 17 each of the two prior weeks. The reported number of deaths in the county last week was seven, compared to nine the week before.

The combination of holiday gatherings and an increase in case numbers have made rapid home test kits a hot commodity, with the Greene County library system running out of free kits nearly a week before Christmas and many retail outlets waiting to restock as well.

Lab tests are widely available, but the wait times can be longer than the five-day isolation period currently recommended by the CDC for patients with COVID symptoms. A patient at the RiteAid in Enon was told Friday, Dec. 31, that her test result would take seven days or more. Other local residents have reported waits of up to five days. The health department spokesperson said she didn’t know if turn-around times differed depending on the test administration site, and the same question to a health department nurse went unanswered as of press time.

According to new recommendations by the CDC, anyone testing positive or exhibiting symptoms should isolate for five days, and then if symptoms have abated and there is no fever, the patient can resume activities but should wear a mask around others and in public for five more days.

Those recommendations were amended Tuesday, Jan. 4, with the request — not a requirement — that individuals who test positive on the fifth day continue isolating for another five.

There is no way to know how many people get a positive result from a rapid home test, and then do not seek a doctor’s care or report their case to a local health authority. That absence of accounting suggests positive case numbers are higher than indicated by the ODH data.

The spread of the virus over the holidays has prompted concern among health professionals that another spike in cases will follow this week’s return to work and school, as has occurred after previous holidays. Sharing those fears, some local parents have opted to keep their children home temporarily while case numbers are high. Yellow Springs School district is continuing its universal masking policy, and asking that all who are eligible for getting vaccinated do so if they haven’t already. Band and choir at both campuses are suspending their practices for two weeks; and, according to a letter sent to families this week, the district’s mask policy will be more strictly enforced at athletic events.

One Response to “COVID-19 numbers surge”