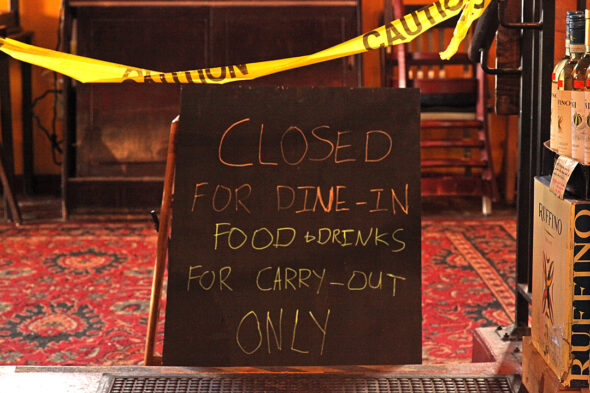 The Underdog Café and Emporium Wines previously ceased indoor dining and gathering. The main seating area has since reopened to the public. Photo by Ben Guenther.

As the pandemic winds into its third year, downtown Yellow Springs businesses continue to adapt. The News recently spoke with the owners of five restaurants about the ongoing effects and obstacles of the pandemic, and will check in with other village businesses in future issues.

Ed. note: As of Wednesday, Feb. 16, the Emporium’s seating area has since reopened to the public for dine-in and lounging.

After an initial shutdown, the Emporium resumed providing a community-centric environment for fine coffee, fresh-baked goods and its breakfast burrito. However, the space — long known as “Yellow Springs’ living room” — has been curtailed as a forum for connection since the onset of the pandemic. For Kurt Miyazaki, owner since 2005, the communal atmosphere of the café is its lifeblood.

“The real joy of being here is seeing people in the community, and having people meet other people here,” he said.

With the pandemic’s precautions and original mandates in place, the dining room of the space was essentially cut in half, Miyazaki said. Once COVID-19’s Omicron variant hit, the in-dining experience was suspended indefinitely. There’s hope for the future, though: the open air area along the side of the building belongs to the Emporium, and the business is hoping to expand outdoor seating to accommodate the needs of their customers by the time summer rolls around.

Aside from the minimized seating, one of the biggest challenges Miyazaki’s staff have faced is the enforcement of a mask policy.

“There’s a lot of hostility, definitely — it brings that out of people,” said Ellery Bledsoe, who has worked at Emporium as a barista since 2019. “It’s made my job much harder.”

Even so, Miyazaki noted that villagers have been understanding of the policy and the need for it.

All in all, he’s grateful for the community’s continued support.

“I appreciate people still sticking by us — these are really tough times,” he said. “We’re not doing as well as we normally do, but we’re hanging in there. It’s because people still shop here locally.”

Further down Xenia Avenue is Ha Ha Pizza, where owner BJ Walters — who took over the shop in 2005 — has had a bit of a different approach to the pandemic.

He said that, prior to 2020, Ha Ha experienced what he referred to as a “golden age” — when business was booming to the point that the pizza restaurant was almost too busy. While Walters was thrilled to have a thriving business, the stress that came along with it had become burdensome.

“Glory be to God — I’m in a blessed position, in that I was ready to retire,” Walters said, adding that the necessary cutbacks he’s had to make since early 2020 have helped him prepare for the sale of his business, which has been on the market since late 2019.

The pandemic forced Walters to scale back his menu and limit his hours, which provided him with the opportunity to put more emphasis on stepping away from the business. While retiring is ultimately his goal, he’s waiting for the right buyer to come along.

Walters added that he feels he has an obligation to the legacy of the business, recognizing that he owes it to the establishment’s heritage to find a buyer who will carry on the Ha Ha tradition. He noted that he’s had a number of interested parties, but none that seem to be the right fit, and that he’s comfortable waiting it out rather than rushing to sell.

“This place is bigger than me — it’s an institution,” he said. “I’m just holding the torch right now.” 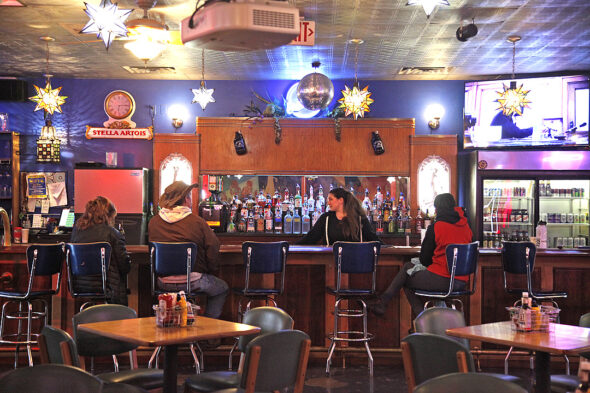 Next door to Ha Ha is Peach’s Grill, owned by Don Beard and Christine ­Monroe-Beard, which transitioned from a drive-thru to bar and grill in 1996. By 2002, Beard saw a need for live music in the village. The space was expanded to include a second bar and a stage, and a new era was born.

“We had huge acts,” Monroe-Beard said. “Leon Russell, Hot Tuna, New Riders of the Purple Sage. We had tons of bands that came through.”

Over the years, Peach’s also became known for its open mic night, where local musicians, comedians and poets alike could share their creative efforts with a receptive and supportive crowd. However, once the pandemic hit, the restaurant’s role as a venue came to an abrupt halt, and Monroe-Beard said the restaurant dialed back its menu as some supplies became difficult to source.

“I know some places in Dayton were doing market price for wings,” Monroe-Beard said incredulously, emphasizing the strangeness of food as common as chicken wings being priced like fresh seafood or other hard-to-find delicacies.

On a positive note, Peach’s had the ability to expand its outdoor seating into the front parking lot via pop-up tents, which the Beards said allowed the business to thrive more than it might have otherwise, given the circumstances. This tactic proved successful enough that the Beards intend to expand the small patio on the front of the building, creating a larger, permanent outdoor seating area. 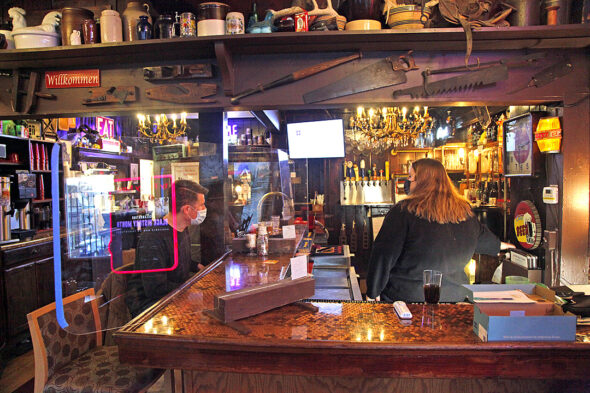 The Beards’ other eatery in the village, Ye Olde Trail Tavern, has faced similar challenges. Monroe-Beard described pre-pandemic business as “amazing, booming,” crediting the village’s appeal as a tourist destination. However, the predictability of the busy season dissolved with the onset of the pandemic, and the livelihood of the Tavern’s staff became a focal point.

“Our major fear was for our employees. What is everyone going to do for money?” she said. That concern was based on the assumption that a statewide shutdown would only last for two weeks.

As things wore on, and the pandemic stretched into months, the concern shifted to basic preventative necessities.

“We were going through all of our sanitation stock and handing out all these supplies to all the employees,” with the hope of mitigating the risks of COVID-19, she said. “We were making sure everybody had sanitizer and food to take home. … We didn’t know what to expect.”

The Tavern and its employees subsisted, in part, on federal Paycheck Protection Program, or PPP, loans, which allowed the business to shut down completely for several months until more was known about COVID-19. Since reopening, business has resumed, but not to pre-pandemic levels.

However, according to Monroe-Beard, most of the core staff has remained, enabling the business to power through spikes of infections; although everyone at the Tavern has been fully vaccinated, some employees have tested positive for COVID-19. But employees have stepped up for one another to cover shifts and keep things running. Because of this, and all that her crew has been through over the past two years, Monroe-Beard said she remains optimistic for the future.

A newer establishment in the village, The Greene Canteen opened its doors in 2019, with the aim of providing healthy, sustainable food options for the community. Owners Brittany and Tim Baum discussed their experiences navigating the challenges of opening a new business against the backdrop of the pandemic.

“We started to get a good momentum going,” Brittany Baum said, referring to the progress the business had made after being open for just 10 months. “And even though we were going into the slower months, we were evolving and adding items to our menu which were bringing people in.”

Once the statewide shutdown occurred, things quickly changed, and since then, the Baums said, business has been an uphill battle. Staffing issues, supply shortages and cost increases have been huge obstacles. For example, the price for a box of latex gloves — essential to any food service enterprise — ballooned from $26 to upwards of $110. Other items have become so scarce that they are no longer attainable.

Many of The Greene Canteen’s suppliers are also faced with staffing shortages and scarcity issues; the Baums said that suppliers sometimes won’t deliver to the restaurant, so employees have to head out of town to pick up necessary items.

“So now we have to figure out how to get 2,000 pounds of flour,” Brittany Baum said.

Despite all this, the Baums said they remain cautiously optimistic, holding out hope that warmer weather will turn things around. In the meantime, Brittany Baum said increased local business would be a boon for the restaurant, and that it “could really use some short-term support.

Tim Baum added: “This is probably the most difficult part of the pandemic for us — this next six weeks.”