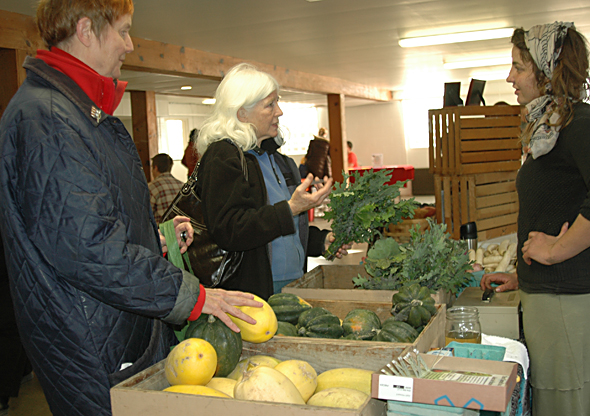 The first indoor winter farm market was held in the basement of the United Methodist church in January 2012. Market goers are shown here buying fresh greens from the produce of Patchwork Farm near Trotwood, aided by Patchwork employee Kate Salatin. (Photo by Diane Chiddister)

“College in national spotlight. Over the last year, Antioch College’s endowment more than doubled and its annual fund grew by 70 percent, leading the college to extend its full tuition scholarships to the next three incoming classes. But the decision to continue the Horace Mann Scholarships had unintended consequences. After an online article … was posted on Yahoo! News … Antioch was flooded with thousands of applications. … With only 75 open spots for the incoming fall class, Antioch could be the most competitive college in the country in 2012.”

Neuhardt for Congress. “Local resident Sharen Neuhardt has played the political odds before and learned a lot while ceding the 2008 Congressional race to her Republican opponent. But this year, after redistricting, the odds are more favorable for Democrats in the area, and she has decided once again to bid for a seat representing Ohio’s new 10th district with the U.S. House of Representatives.”

Baptist break ground for new church. “The First Baptist Church of Yellow Springs will hold a groundbreaking ceremony for its new church Sunday, February 9, 1 p.m., at Dayton and King streets. The public is invited to attend.”

Bar owner files suit. “The latest of three lawsuits filed on behalf of Tricia Di’s seeks $1 million in damages from the Greene County Board of Elections, alleging that the election in which voters decided to make the precinct where the bar and restaurant is located dry should never have taken place. The suit further seeks $250,000 in damages from Trent P. Fisher, James G. Alexander, Earl L. Hull and Donald H. Hollister, all Yellow Springs residents, for a variety of reasons, including harassment, slander and conspiracy to deprive the plaintiffs of their lawful business.”

Antioch student strike looms. “The Antioch College campus has been in a turmoil since Friday and appeared to remain uneasy as the News approached press-time today. Students, threatening a strike if their demands are not met, began a ‘negotiating’ session with vice presidents Bill Warren and Al Berney and others at 9 this morning.”

Folk dance festival. “The man whose volunteer leading of the folk dancing here a dozen years ago established it as a popular activity in Yellow Springs will be back this weekend. Rex Barger will lead a folk dance festival ‘for everyone, young and old, towns people and college students.’ Barger was founder of the weekly Community Folk Dance held Saturday nights at Mills Lawn School.”

Window smashed. “Mr. and Mrs. A. Lynn Altenbernd, 113 E. Whiteman St., returned home from the Brotherhood Week observance of the Yellow Springs Committee for Racial Equality at the Opera House about 9:30 last night to find a window smashed in their home.”

Bird Count. “Thirty-one species of birds were observed in the Glen as part o the nationwide Christmas bird census, according to a report recently received from Mr. William E. Duellman, of the Dayton Audubon Society.”

Fire on roof of Antioch Hall. “Monday morning, December 28, at 10:20 a.m., passengers on the Little Miami Railroad saw flames leaping from the roof of “the main college building.” Apparently, sparks from one of the chimneys had ignited the wooden shingles. “A number of students and villagers responded so quickly that in less than ten minutes after the first messenger reached campus the last spark of fire was extinguished. … Before the sun went down Messrs. Gerhardt, Hardy and Funderburg had finished reshingling.”

YMCA Planned. “The young colored men of the village are organizing a Y.M.C.A. 23 persons have expressed a willingness to belong to such an organization. This is the outcome of the great revival going on at the Baptist church.”

Ice for your ice box or ice house. “Some of the ice being harvested around Yellow Springs during the last week is ten inches thick.”